A fire that destroyed a 150-year-old heritage building in Melbourne’s north-west weeks after contentious plans to convert it into a hotel were approved is a suspected act of arson.

The planning permit granted in early December required the owners to restore the exterior of the 1866 bluestone Westmeadows home, which was vandalised and became derelict in the months before the fire. 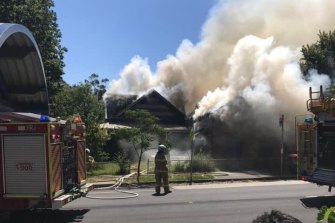 Firefighters at the Westmeadows property on December 30.

Police confirmed they had deemed the December 30 blaze suspicious and opened an investigation, but did not name any persons of interest.

Developer ZZQ Investment Trust, which bought the four-bedroom property in 2020, notified Hume City Council it intended to repair the building and continue with its $13 million plan to turn it into a four-storey hotel and cafe.

Hume City councillor Naim Kurt, an advocate for the 19th century home’s preservation, said the community would hate to see a repeat of the Corkman Irish Pub saga, in which the owners unlawfully razed the historic Carlton hotel in 2016 and did not rebuild it.

“The hall burnt down just three weeks after a Victorian Civil and Administrative Tribunal ruling effectively placed a heritage badge on it through a conservation schedule. That has raised a lot of suspicion in the community as it now means a lot of the heritage aspects are now no longer able to be documented,” Cr Kurt said. 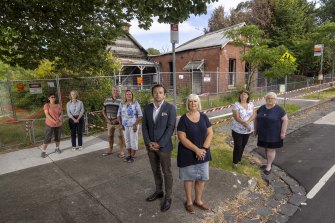 Councillor Naim Kurt, community member Kaylene Wilson and other locals say the house was left to slip into disrepair.Credit:Wayne Taylor

The permit for a hotel, to be built on the location 10 minutes’ drive from Melbourne Airport, was rubber-stamped by the tribunal on December 7.

The approval came after months of community opposition last year, with formal objections and a petition signed by almost 1000 people arguing the plans did not fit the character of the residential area.

Hume City Council subsequently unanimously voted down the permit application in May, before ZZQ Investment Trust successfully challenged the council’s decision at VCAT.

The property, once the head office of the Broadmeadows Shire, was in reasonable condition when ZZQ Investment bought it for about $1.7 million, with its timber floors, French doors and roof intact. 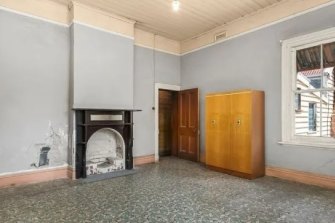 The Westmeadows home’s living room when it was listed for sale in 2019.Credit:realestate.com.au

The house’s condition has deteriorated over the past year – nearly every window was smashed, wooden planks became detached from the floor, doors were pulled from hinges and the grass grew to knee height.

Then, as temperatures hit 34 degrees about 3pm on December 30, neighbours gathered at the property as thick plumes of smoke billowed from its roof.

It took 20 firefighters 45 minutes to control the fire. A search of the site afterwards found no occupants. 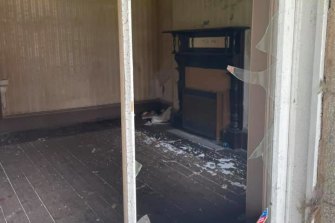 The living room in September, months before the fire at the property.

A police spokeswoman told The Sunday Age that fire investigators regarded the blaze as suspicious.

“An investigation into the circumstances is ongoing,” she said.

Mr Zhou’s solicitor, Neil Young, said vandalism at the property was the work of youths and the residence and outbuildings were otherwise in the same state of repair as when his client bought it. The Sunday Age is not suggesting that Mr Zhou had any involvement in the fire. 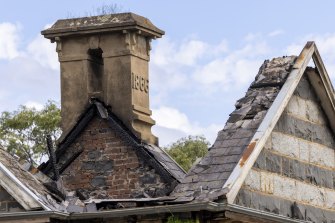 The home’s exterior on Thursday, which was damaged by the fire.Credit:Wayne Taylor

“The fire has caused nothing but cost and inconvenience to [Mr Zhou], due to the resulting Hume Council safety orders,” he said, referring to the council instructing Mr Zhou to install fencing at the site since the fire.

Kaylene Wilson, a co-ordinator of the community campaign against the planned hotel, said many nearby residents were devastated to hear about the damage caused to the building and were keen to see it repaired.

“We were opposed to the hotel because it will strip the area of its charm, it’s an untasteful design, and there was almost no community consultation,” she said.

“It’s then been heartbreaking to see the historic building fall into a state of disrepair. I burst into tears when I saw the fire. The council must make sure the developer rebuilds it exactly the way it was supposed to be.” 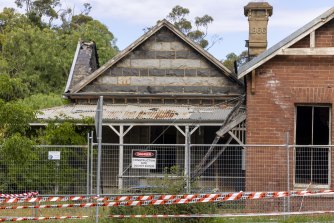 Fencing and tape were in place on Thursday but had not been before the fire on December 30.Credit:Wayne Taylor

Some community members were also infuriated by a Facebook comment posted by Hume councillor Jack Medcraft after the fire. “Well I’m sorry to say it looks like the whole building will be demolished as it doesn’t look structurally sound and would cost a fortune to rebuild,” he wrote.

In another post, he wrote: “This place would not have burnt down if the original decision to approve the application had been given.” 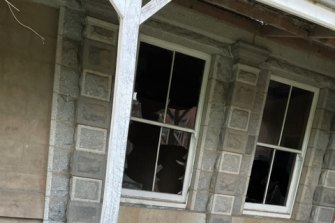 Smashed windows of the home’s bluestone exterior in the months before the fire.

Cr Medcraft told The Age that if the council had originally approved the permit, construction would have already started, meaning the building would have been secured. Cr Medcraft was among the councillors who voted against the plans in May but appears to have changed his position.

In another comment he wrote “the owners are now waiting on CCTV footage and arson squad report”, prompting accusations from community members that he was in communications with ZZQ Investment. 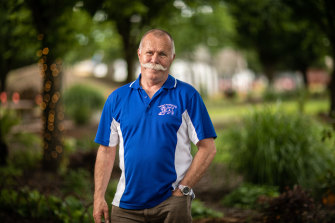 Cr Medcraft said he was a friend of Mr Zhou and had “dealt with him before” because Mr Zhou owned a property in Sunbury.

“I’ve got no involvement other than knowing the guy personally. I want the best for the town and that includes knowing who and what started the fire,” he said.

Council building surveyors have inspected the property and advised councillors that the building could be salvaged.

Cr Kurt said the house’s slide into disrepair reflected a failure of planning laws because the council had been powerless to force the owners to protect the site.

“It beggars belief that the site of a $13 million development wasn’t properly secured by the owners,” he said. “Had it been done so, it’s likely the fire wouldn’t have occurred.”