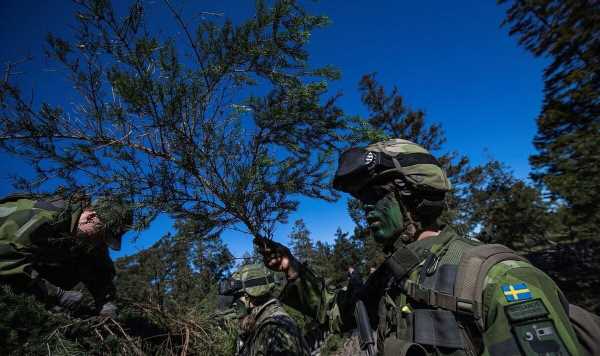 Military plans include to deploy 4,000 troops from the island in wartime and add anti-ship missiles to the arsenal which already includes surface to air missiles, reports reveal. The Gotland regiment was resurrected in 2018 as a part of the general rearmament following Russia’s annexation of Crimea in 2014 but the war in Ukraine has accelerated training.

Gotland regiment Colonel Magnus Frykvall, who describes Russia as the major threat, told Sky News: “Putin has clearly shown his intent and his will to use military force in order to gain his political goals.

“We had a plan to increase the military capability on the island for a long time, but since the invasion [of Ukraine] we try to do it a lot faster.”

On Monday, Sweden said Europe was living in a dangerous new reality, referring to Russia’s invasion of Ukraine, as Sweden and Finland will formally submit simultaneous requests to join NATO on Wednesday Swedish Prime Minister Magdalena Andersson has said.

Russian President Vladimir Putin said the move by the Scandinavian nations to join the 30-member military alliance did not threaten Moscow directly – but stressed that any expansion of military infrastructure would trigger a response from the Kremlin.

After about 200 years of military non-alignment, many of the soldiers on Gotland think it’s time to join the alliance.

Marcus Lagergren, a member of the Home Guard told the publication: “NATO gives high-security measures. It’s more likely we can keep the peace here in Europe.

“So I think it is really, really great for both Sweden and Europe and NATO that Sweden joins NATO.”

In 1808, Gotland was briefly occupied by the Russians who also prized its strategic location.

Now a popular tourist spot, it has always been important to Sweden’s defence.

Mikael Norrby, a historian at the University of Uppsala, explained: “The saying is the one who control Gotland controls the southern Baltic.”

He said: “It’s a question of location.

“You have Gotland in the middle of the Baltic, it’s less than 100km to the Swedish mainland, perhaps 120km to the Baltic states, 200km to Finland and 300km down to Kaliningrad, the Russian enclave… no matter if you are east or west, you don’t want the other guy to have Gotland.”