Swedish football fans have sent menacing messages to Britain warning they will win the World Cup clash on Saturday – because their ancestors once slaughtered nuns in Britain.

While World Cup rivalry can be friendly fans from all sides have taken it too far on occasion. Now, it seems it is the turn of the Swedes, including a member of parliament.

After an impressive performance by England’s goalkeeper Jordan Pickford against Colombia on Tuesday evening, the Three Lions will meet Blågult (meaning the blue-yellow) at the weekend.

The rival fans from Europe took to Twitter to blast England and insist they will find victory, because of an ancient raid on a British church.

He wrote: ‘The first time Sweden met England will probably be said to be when the Vikings plundered the monastery in Lindisfarne in 793. Then we got only church plate. Now it will be gold.’ 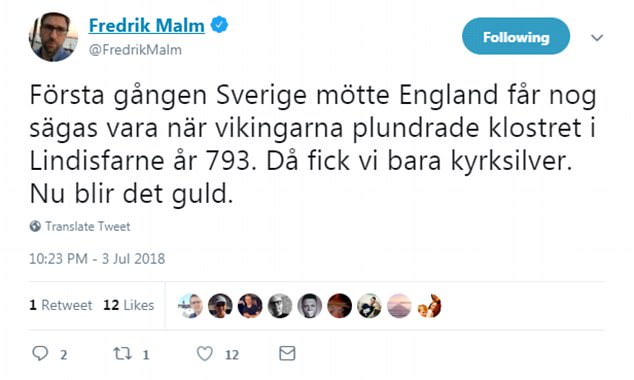 A painting of Viking ships arriving in Britain, ca 1130. Found in the collection of Pierpont Morgan Library 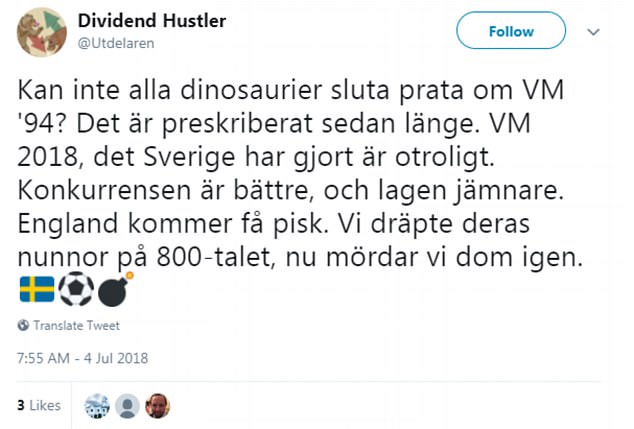 Can’t all dinosaurs stop talking about World Cup ‘ 94? One Swedish fan wrote on Twitter as he spoke about ‘defeat’ in 793

Another man wrote: ‘Can’t all dinosaurs stop talking about World Cup ‘ 94? It is barred long ago. VM 2018, what Sweden has done is incredible. Competition is better, and the law is smoother. England will be whipped. We slew their nuns in the 800 century, now we murder them again.’

The referenced raid took place in January 793 as the Christian monastery at Lindisfarne in Northumbria, north-east England was attacked. 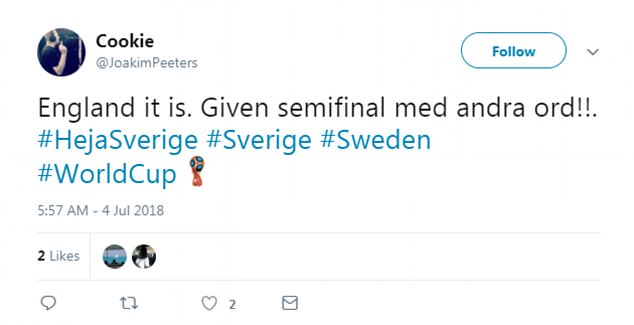 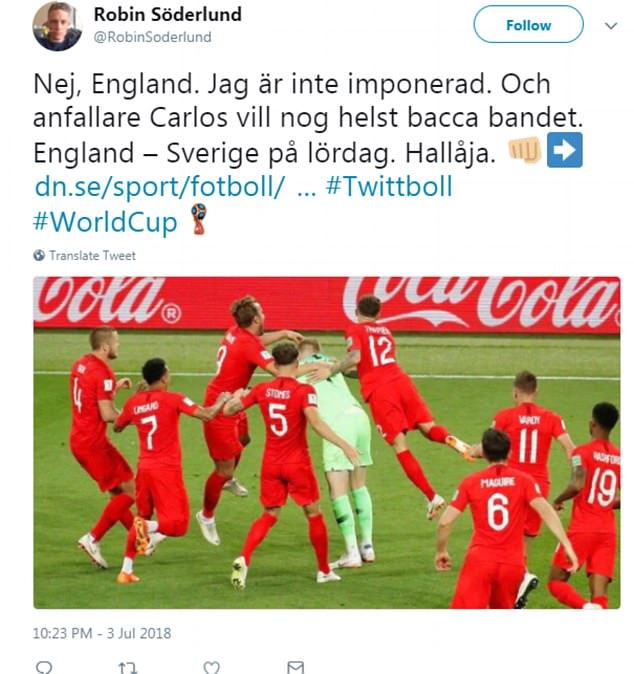 What was the Lindisfarne raid?

Vikings raided a monastery on Lindisfarne, meaning holy island, in 793.

Decades of viking raids followed attack which sent shockwaves through Anglo-Saxon England and the Christian West.

Lindisfarne monastery, just off the Northumbrian coast, was exposed and the Vikings easily raided after arriving by sea.

On a January day, the Vikings arrived and attacked.

They burned buildings, stole treasures, murdered monks, and nuns and terrified the community.

Some Christian Church leaders said the Vikings were sent by God, to punish people in England for doing wrong.

Monastries at the time were treasure troves of books and art and ancient works.

The church of St Cuthbert on Lindisfarne was a sacred place of pilgrimage for Christians, but the Vikings attacked after arriving by sea, killing animals, monks and nuns.

Others were also critical of England’s performance.

Swedish man Gistav Ahlander was hopeful of his teams chances, saying on Twitter: ‘Sweden will knock out England. Sweden is impressing more. England and Colombia held a low level yesterday. Nothing that scared. Their defensive is like that. Keep track of Kane and win Sweden.’

However, odds on an England win were better, according to bookmakers in the Nordic nation.

According to Nordic Bet and state-owned Svenska Spel, England were more likely to come away with a victory.

Odds for the Swedish team were 4,40 for a win and 1,90 for a loss, meaning a bet on a win would get more money, because it is less likely.

The odds on a draw were around 3.3 times the money placed.