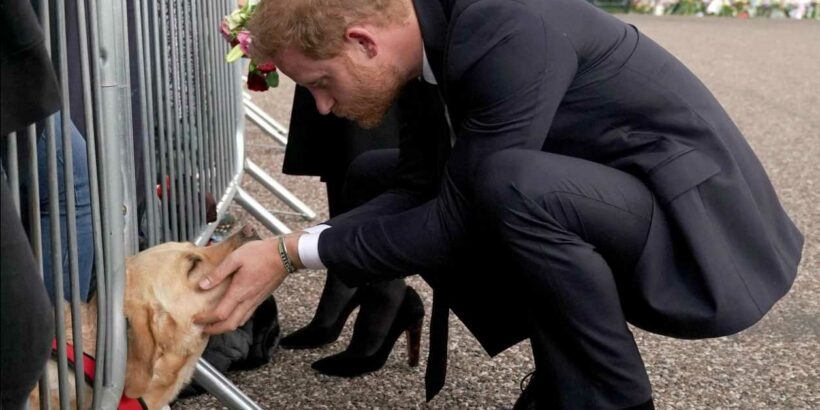 PRINCE HARRY petted a royal fan's Labrador as he met mourners at Windsor after the Queen's death.

The Duke and Duchess of Sussex joined well-wishers outside castle gates as he thanked those who had arrived as a mark of respect. 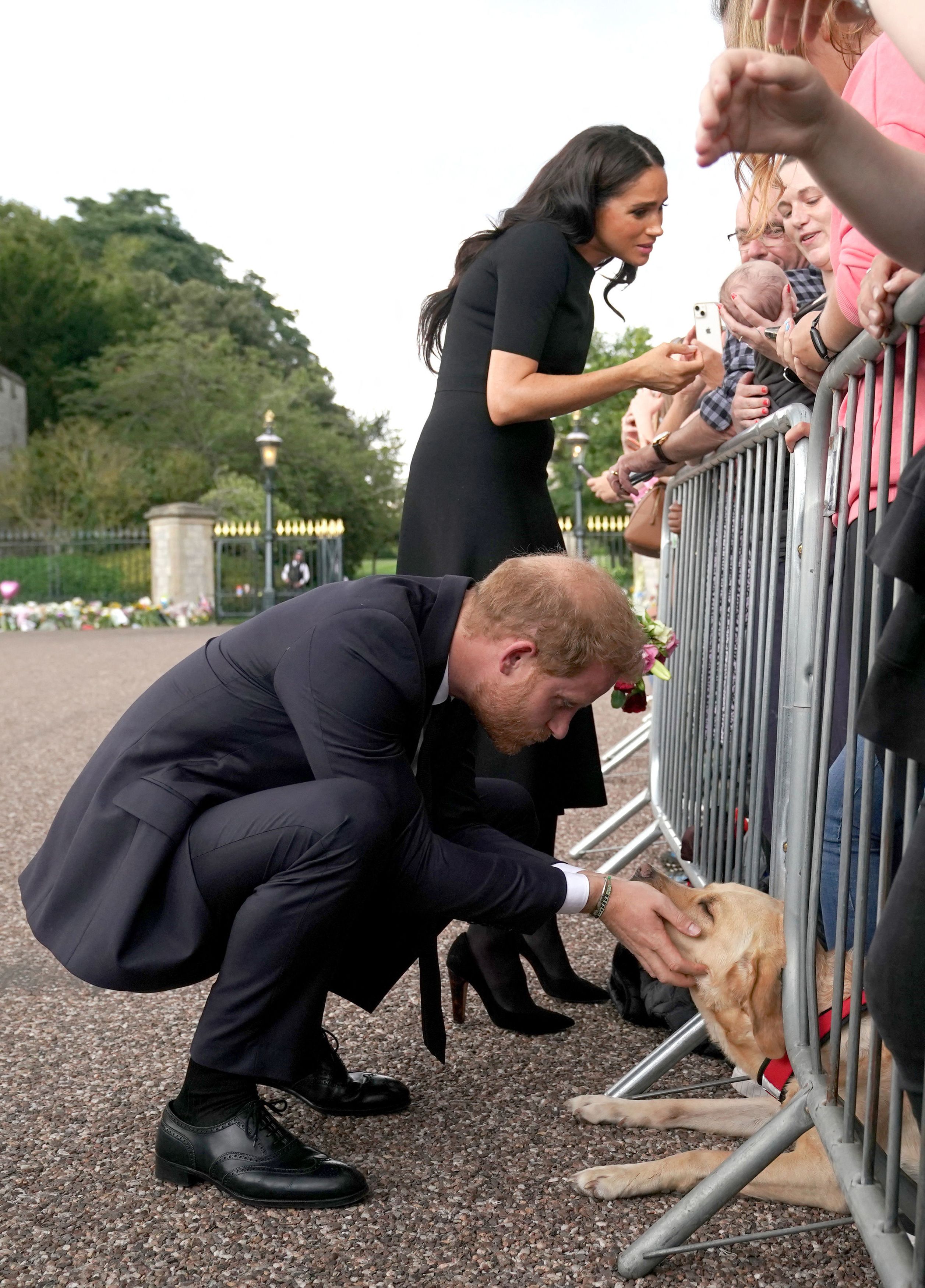 Thousands of people have turned up at royal sites across the country in the days since Her Majesty the Queen passed away.

Mourners who lined up to pay their respects at Windsor were greeted by Prince Harry and Meghan, along with Prince William and Kate.

The four of them shook hands with Brits outside Windsor Castle in what was their first public appearance together since Prince Philip's funeral.

In one particularly heart-warming moment, Prince Harry was seen stroking a Labrador.

The puppy was laid on the ground and had dipped its head below the fencing.

Crouching down, Harry warmly rubs the dog's face as it closes its eyes in relaxation.

The younger members of the Royal Family put on a united front as the Firm came together after losing their matriarch.

Harry and William have had a strained relationship since the Duke and Duchess of Sussex stepped down as senior members of the Royal Family and left to live in America in 2020.

I cherish the times you met Meghan and our kids, says Harry in Queen tribute

The family relationship's with Harry likely became even worse after he and Meghan gave a bombshell interview to Oprah Winfrey last year.

But King Charles appeared to offer an "olive branch" to the Sussexes with his warm remarks last week as he addressed the nation for the first time as King.

He said he wanted to "express my love for Harry and Meghan as they continue to build their lives overseas."

And Prince Harry appeared to show the feeling was mutual this morning as he reached out to his father and praised the Queen in a statement.

He said: "Granny, while this final parting brings us great sadness, I am forever grateful for all of our first meetings—from my earliest childhood memories with you, to meeting you for the first time as my Commander-in-Chief, to the first moment you met my darling wife and hugged your beloved great-grandchildren.

"I cherish these times shared with you, and the many other special moments in between.

"You are already sorely missed, not just by us, but by the world over. And as it comes to first meetings, we can now honour my father in his new role as King Charles III."

Earlier this week, King Charles made the same journey outside Windsor Castle and shook hands with royal fans.

There were cheers of "God save the King" as he arrived at Buckingham Palace.

One over-eager supporter even gave the King a kiss on the cheek in a breach of protocol.

He then poignantly visited the sea of flowers left for his mum and paused for a moment of silent reflection.

The King then entered Buckingham Palace with Queen Consort Camilla. 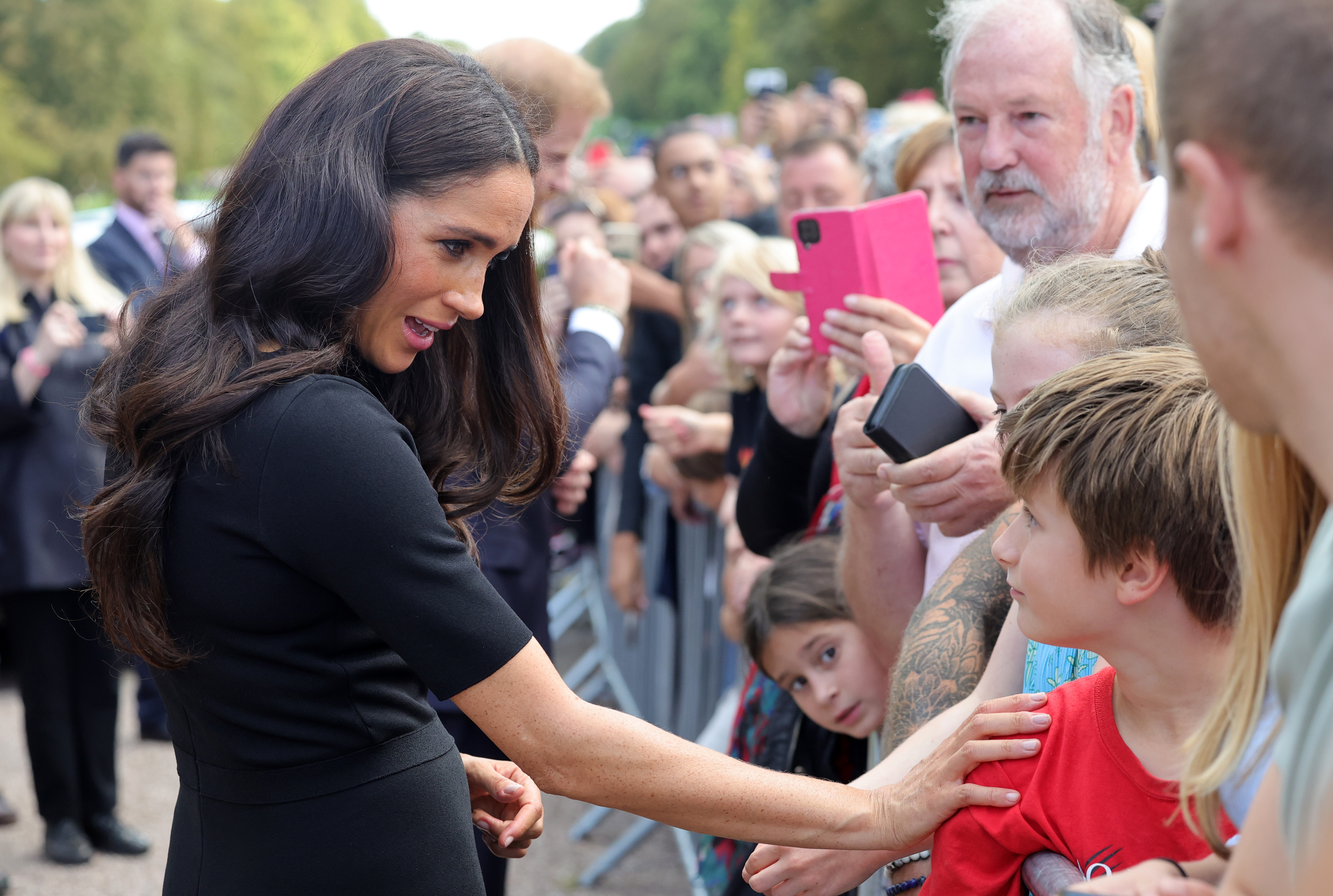