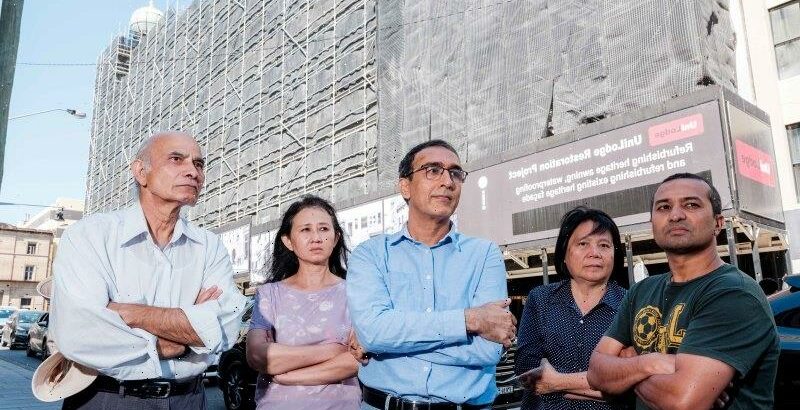 Investors from retirees to single mothers on low incomes fear losing their properties after their strata levies suddenly jumped from under $2000 per quarter to more than $10,000 for building repairs they had no say in approving.

Hundreds of mainly mum-and-dad owners who paid about $200,000 for each apartment in the UniLodge student accommodation building on Broadway have been ordered to pay the money by strata managing agent Bright and Duggan, which a tribunal appointed to take full control over the owners’ corporation. The building had been allowed to become run down over many years and repair and maintenance works were necessary for its structural integrity and safety, Bright and Duggan said.

Many of the apartments in the heritage building have been vacant or realising significantly lower rents since the coronavirus pandemic prevented international students from returning to Sydney. 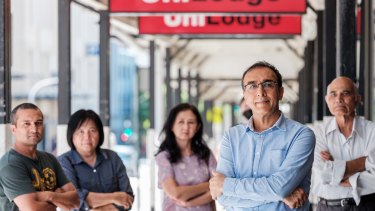 UniLodge subsidiary Sydney Campus manages the historic building and student rentals, from which it takes a commission. One of the owners, Sandeep Khera, whose quarterly levies increased from $1147 in August to $9688 in December last year, said a majority of more than 580 student apartment owners had signed a document, often without reading the fine print, giving UniLodge an irrevocable power of attorney. This had allowed it to vote on behalf of the majority of owners at annual general meetings of the owners’ corporation.

A dispute between UniLodge and the owners’ corporation was then heard in the NSW Civil and Administrative Tribunal, which appointed Bright and Duggan as the new strata managing agent with full control over the owners’ corporation from April 2020 for two years. Residents who spoke to the Herald are worried that UniLodge will again hold the majority of their votes using the proxies after this April. 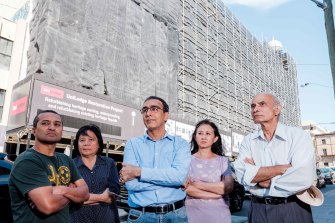 Owners of units are facing increased strata fees to pay for building upgrades whilst also receiving no rent for two years as students have stayed away due to the COVID-19 pandemic.Credit:Oscar Colman

In a letter sent to unit owners in August last year, Bright and Duggan said $20 million was needed in the next three years for priority works that affected “the structural integrity and general operation of the property, as well as the health, safety, and amenity of building occupants”. This was in addition to $20 million for the street awning repairs and upgrade of the Broadway and Bay Street windows and facades that a council spokeswoman said have been approved.

Ten owners who spoke to the Herald supported replacement of the awning, but questioned the need for further work to be done to the windows and facade at the same time, describing some of it as “cosmetic” and not urgent. 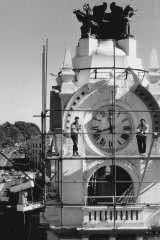 The Broadway clock tower getting a facelift in 1991.Credit:Peter Kevin

Mr Khera said a $2.2 million proposal to repair the clock tower was among building projects he hoped could be delayed “as we are bleeding under these exhorbitant levies”.

Alan Sedghi, 67, said he now has to pay about $40,000 per quarter in levies for four UniLodge apartments he bought for more than $200,000 each to fund his retirement.

“It looked on paper like a good investment and something I wouldn’t have to worry about, but it has turned out to be the complete opposite,” he said. “It’s devastating”.

In his 17 years as a real estate agent, Mark Roberts from McGrath, who Mr Sedghi asked to sell the units, said he had never seen strata levies as high as those charged for the UniLodge apartments.

“These levy figures are astronomical,” Mr Roberts said. “He’s got no hope of selling it. With those fees he couldn’t give it away.”

Varun Marwah, 38, an army reservist who also works as an air quality consultant, paid $240,000 for his UniLodge apartment 18 months ago as an investment for his eight-year-old twin daughters.

“I have had so many sleepless nights over this,” Mr Marwah said. “Legally, the levies have a leg to stand on and we cannot challenge them because all the voting rights have been given to Bright and Duggan as the owners’ corporation.” 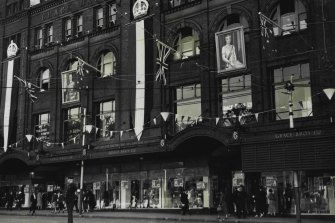 The old Grace Brothers Broadway building in May 1937 when it was decorated for a Coronation festival.Credit:Fairfax Media

Last year, Bright and Duggan sought expressions of interest from lot owners for a collective sale of the building “in view of the precarious financial position of the owners’ corporation” after it received “unsolicited” offers of $110 million to $160 million for the site.

Mr Marwah said it was “a lose-lose situation for owners” some of whom were severely distressed. “People feel hopeless, bullied, cornered, extorted and helpless,” he said.

Josephine Sammut, a 74-year-old pensioner who raised three children on her own said she was shocked to receive a levy notice for $10,767 in September. Bright and Duggan sent her a debt recovery notice on January 27 ordering payment of arrears within seven days.

‘These astronomical levies have caused an impossible financial strain and ruin our plan for retirement. I believe they are trying to put us in a debt trap.’

Ms Sammut said she bought the UniLodge apartment for $182,000 in 2015 after selling her Punchbowl home to get out of mortgage debt.

“This is all of my life savings. This is my superannuation,” she said.

Lien Pham, a single mother of three who paid $220,000 for her 27-square-metre loft apartment in 2018, has received two quarterly strata levy notices of more than $10,470 each that she cannot afford to pay. “I don’t have that kind of money,” she said.

Dushyant Sharma, a 74-year-old retiree was shocked to get two quarterly strata levy notices for more than $13,000 each since November after previously paying about $2500 per quarter.

“I bought this UniLodge apartment to partially fund my retirement,” he said.

Choay Kean Wong said her strata levies were about $1800 per quarter but increased to $22,165 per quarter in the November and February quarters.

“These astronomical levies have caused an impossible financial strain and ruin our plan for retirement,” she said.

“I believe they are trying to put us in a debt trap, so they can do a mortgagee sale.”

‘This is a cautionary case’

Bright and Duggan told the Herald it was appointed to do work that the owners’ corporation had “failed to undertake over many years with the highest priority of ensuring the building can be safely occupied”.

“There are no cosmetic renovations being carried out at the building,” it said.

“This is a cautionary case of the consequences of long-term chronic undermaintenance of a building by an owners’ corporation, resulting in the need for immediate works to ensure the building’s safety, structural integrity, and safe habituation.

“We empathise with these lot owners, however, the financial position of individual lot owners does not absolve the owners’ corporation of its legal obligations to maintain the structural integrity of the building for safe occupation.”

In its December update, Bright and Duggan said it had contacted the Office of the Building Commissioner and Fair Trading NSW to discuss the condition of the building and seek an independent review of its actions as compulsory managing agent.

UniLodge said it had no authority over the management of the owners’ corporation appointed by the tribunal and was “unable to make any comment”.

Karen Stiles, the executive director of the Owners Corporation Network, the peak body for residential strata owners, said properties had to be maintained and ideally improved over time to hold their capital and rental values.

“The consequence of ignoring essential repairs and maintenance will be large, unbudgeted levy increases in order to make the building safe or worse,” she said. “Owners were still arguing about costs when the Miami building collapsed, claiming 98 lives.“