Royal Easter Show organisers have closed a “free-fall” ride after a Sydney mother said operators failed to secure a harness around her four-year-old son at the annual festival on Sunday.

Sky Boustani Curtis said her son – who has autism – was on the ride which started operating before his harness was secured. The ride was stopped after onlookers “screamed” upon seeing the boy unrestrained in his seat, she said. 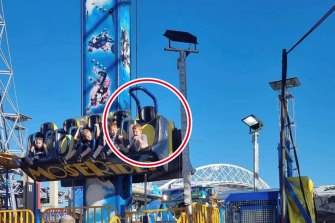 Sky Boustani Curtis said her son was on the ride which started operating before his harness was secured. The image was captured by an onlooker.Credit:Facebook

The ride has a gondola carrying riders who are lifted to the top of a large vertical structure, then released to free-fall down the tower.

The ride has since been closed by the Show organisers as a result of the incident.

Curtis said she filled out an incident report but was yet to hear from the Easter Show organisers.

“[I] would like to know it was taken seriously, it just felt like the whole situation was like it was nothing to worry about from them,” she said.

“We have not been contacted by the Easter Show and the two girls [operating the ride] never even said one word to us when it happened or even after.”

After a photo of the boy on the ride became widely shared across Facebook, the Royal Easter Show released a statement on the matter.

“The safety of patrons at the Show is paramount, and we have shut down the kids’ Free Fall ride following a reported issue with a harness,” the statement read.

“The safety systems of the ride functioned well to prevent any injury occurring and the ride will not operate again until a full investigation has been completed and the ride has been approved by specialist engineers.”

The post was made by Facebook user Eva Grace, who saw the incident unfold and warned parents to “make sure you’re watching the way they strap your child into a ride”.