Amman: South Syrian rebels have agreed to give up arms in a Russian-brokered ceasefire deal, rebel sources said, surrendering Daraa province to the government in another major victory for Syrian President Bashar al-Assad and his Russian allies.

On Friday, the Syrian government recovered the Nassib border crossing with Jordan, held by rebels for three years, state media reported, after an assault in insurgent territory along the frontier backed by Russian air strikes. 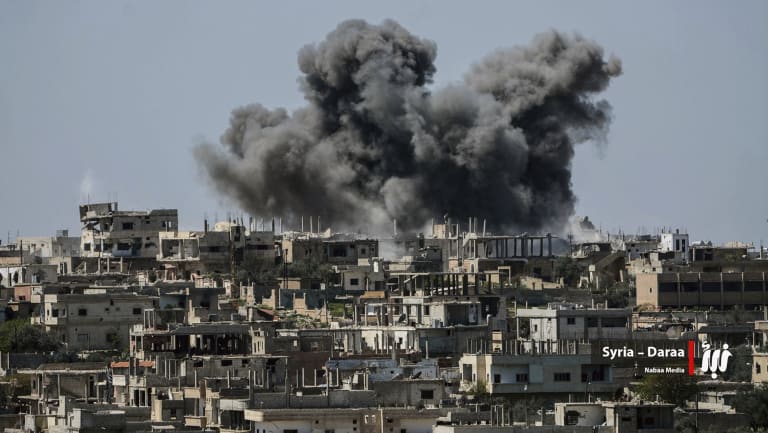 A state television correspondent said the rebels had agreed to hand over heavy and medium weapons in all the towns and cities included in the surrender deal.

Rebel sources said Russia would guarantee the safe return of civilians who fled the government offensive in the biggest exodus of the war, with 320,000 people uprooted. Some 60,000 were reported to have already fled to Jordan.

Seven years into the war which has killed hundreds of thousands of people, Assad now has control of most of Syria with his allies' help, though most of the north and a chunk of the east remains out of his hands. The presence of Turkish and American forces in those areas will complicate further gains. 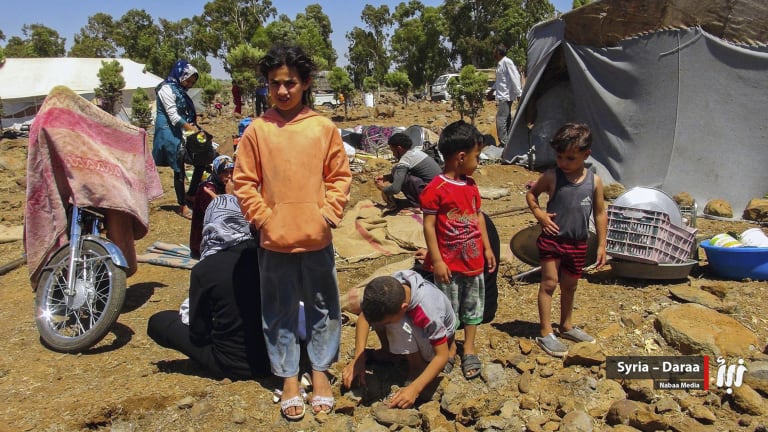 People who fled from Daraa province, gathering in the Quneitra countryside, near the Israeli-occupied Golan Heights, Syria.

Russia has been at the forefront of the Daraa campaign, both bombing and negotiating with rebels who were told at the start of the offensive to expect no help from the United States.

Assad's next target in the south-west appears to be rebel-held areas of Quneitra province at the frontier with the Israeli-occupied Golan Heights, where fighting between insurgents and the government escalated on Friday.

Israel said it had targeted a Syrian army post that shelled a frontier "buffer zone" in the Golan area.

Government advances in Daraa since mid June had brought large parts of the province back under state control. 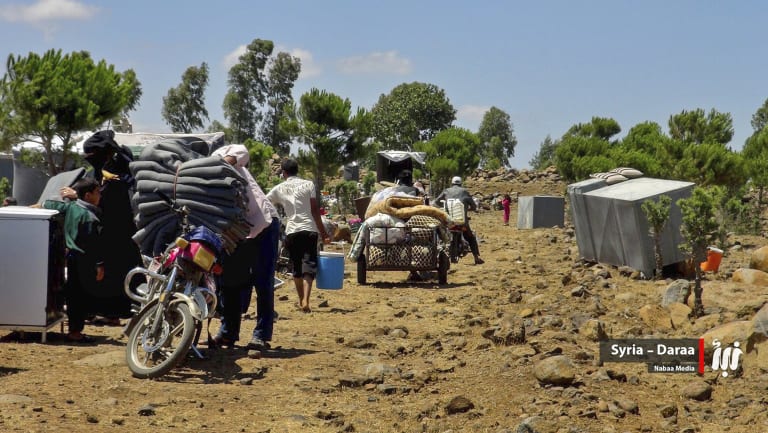 The Assad forces captured new areas near the border with Jordan forcing residents to flee.

Taking back the Nassib crossing paves the way for Assad to reopen a trade artery vital to his hopes of reviving the Syrian economy and starting to rebuild government-held areas.

Russian guarantees will also be extended to rebel fighters who wish to "settle their status" with the government – a process by which former insurgents accept to live under state rule again, the rebel sources said.

Rebels who refused to come back under Assad's rule would leave for the insurgent stronghold in north-west, they said.

It echoes the terms of previous opposition surrenders, but according to rebel sources, they also secured a concession that some government forces would withdraw from the area.

Russian military police would deploy instead with local forces overseen by Russia also deployed, they said.

The deal is to be rolled out across rebel-held areas of Daraa in phases, but there was no timeline as yet, said Abu Shaima, spokesman for an operations room for rebels under the Free Syrian Army banner. 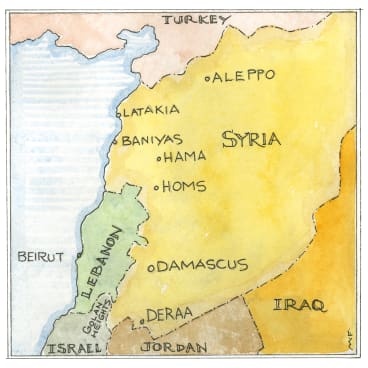 More than 60,000 Syrians are said to have left Deraa for Jordan.

The initial phases would cover the area along the border with Jordan, rather than the parts of north-western Daraa around the city of Nawa, he said.

He said Syrian and Russian jets had pummeled towns across the south-west and villages near the border crossing in the past few weeks.

Most of the hospitals had shut down amid the destruction in insurgent territory, which now barely had access to water or electricity, he said.

Several witnesses along the Jordan border fence with Syria said they people saw a convoy of more than a hundred armoured vehicles and tanks with Russian and Syrian state flags, along with hundreds of troops near Nassib.

Assad's Iran-backed allies are also fighting in the campaign, defying Israeli demands to keep out of the border area. Hezbollah was helping lead the offensive but keeping a low profile, pro-Damascus sources said. 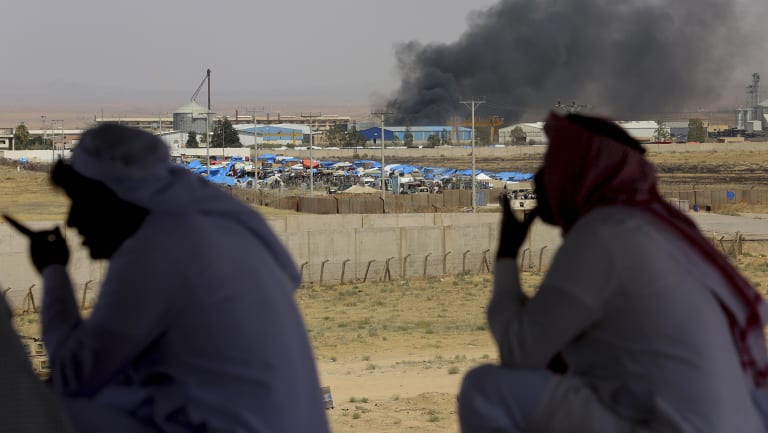 Jordanian residents of Jabir village watch aid deliveries to Syrians fleeing the government offensive in the south as smoke from unknown fire rises.

Both Israel and Jordan, which beefed up their borders, said they would not let refugees in but would continue to distribute aid inside Syria.

The UN refugee agency has urged Jordan to open its borders to the fleeing Syrians. The Norwegian Refugee Council has called this the largest displacement of Syria's seven-year war. 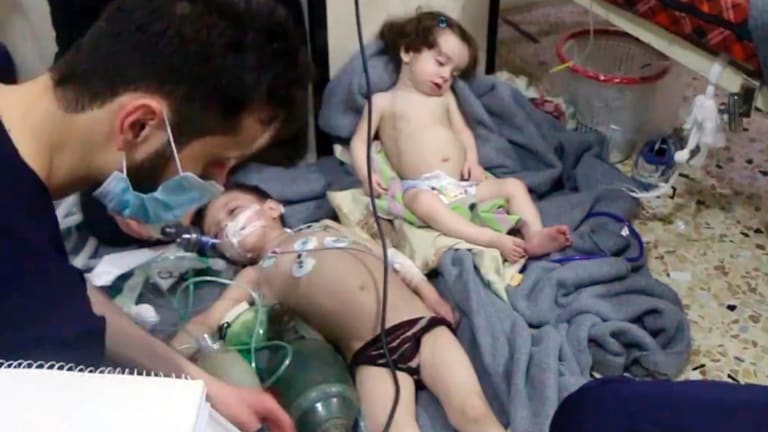 Medical workers treat children following an alleged poison gas attack in the opposition-held town of Douma, in eastern Ghouta, near Damascus, in April..

Meanwhile a preliminary report by the world's chemical weapons watchdog released on Friday said "various chlorinated chemicals" were found at the site of an attack in Douma, Syria, in April that killed dozens of civilians and prompted air strikes by Britain, France and the United States.

The Organisation for the Prohibition of Chemical Weapons (OPCW) sent a fact-finding mission to Douma roughly a week after the April 7 attack in the enclave near Damascus.

"Along with explosive residues, various chlorinated organic chemicals were found in samples from two sites," it said, indicating that chlorine may have been used as a weapon.

The OPCW said that its team was continuing its work to establish the significance of the results.

The OPCW has documented systematic use of banned munitions in Syria's civil war, including nerve agent sarin and sulphur mustard gas. It has not assigned blame for the attacks.