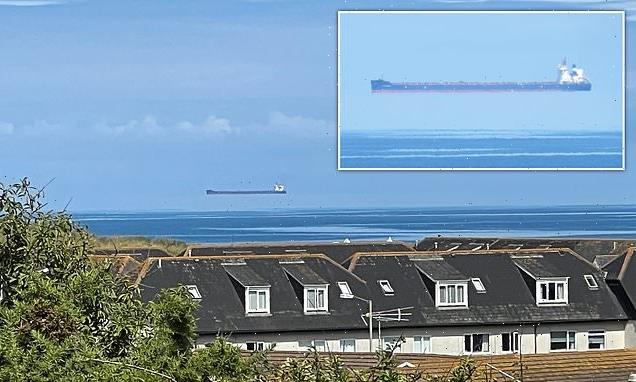 Is that ship FLOATING in mid-air? Video shows giant tanker appearing to hover above the sea off Cornwall in ‘very cool’ optical illusion

A ‘levitating’ tanker has been spotted floating off the coast of Cornwall, with the bizarre optical illusion said to be caused by the way light travels through air of different temperatures.

Footage of the giant tanker shows it appearing to hover in mid-air off Perranporth, on the north coast of Cornwall.

Lizzi Larbalestier, a well-being specialist who captured the footage, said she was blown away by the befuddling phenomenon.

She said: ‘I spotted it off Perranporth on Thursday around 10.45am. It was very, very cool.

‘The ship has been around a few days now, sitting on the horizon but as I came home from walking Goose, my dog, I did a double take as it seemed to be flying. 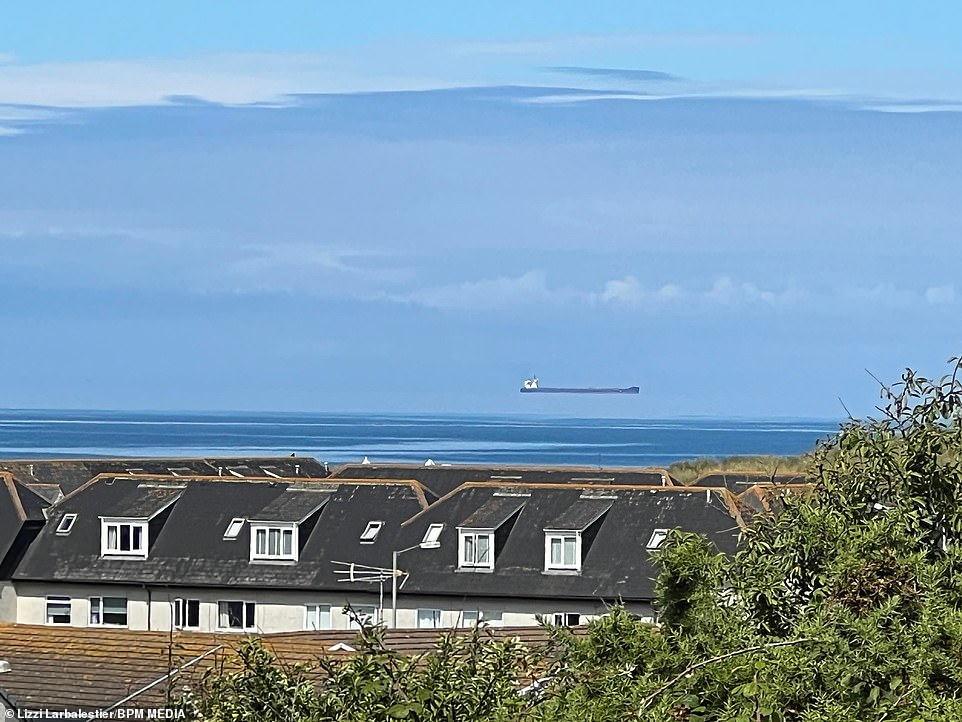 A ‘levitating’ tanker has been spotted floating off the coast of Cornwall, with the bizarre optical illusion said to be caused by the way light travels through pockets of warm air 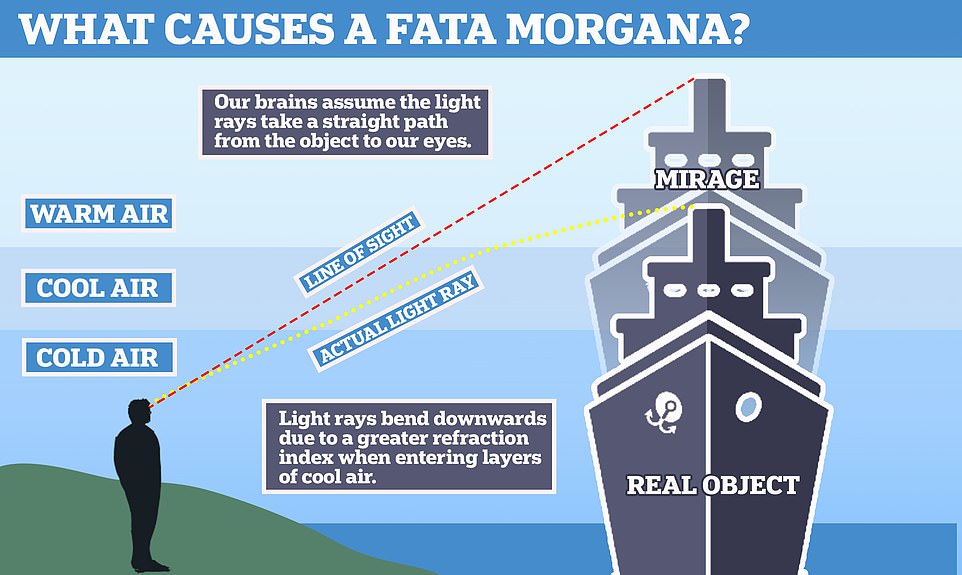 The Fata Morgana, an optical illusion that makes it appear objects are floating in mid air, is caused by the way light travels through layers of air that have a gradient of temperatures

‘The optical illusion stayed for at least half an hour… and like people do with most optical illusions or magic tricks I was trying to track what it was or how it worked.’

The mirage is created when the sun heats up the atmosphere above land or sea, which creates a gradient of temperatures.

A layer of warm air sits on top of a layer of cold air, causing the light from the ship to bend as it passes through gaps in air currents.

The brain assumes that light travels in a straight paths, so when it bends, it thinks the object is where it would be if the light’s path runs straight.

David Braine, BBC meteorologist explained that the phenomenon is caused conditions in the atmosphere which bend light.

‘Superior mirages occur because of the weather condition known as a temperature inversion, where cold air lies close to the sea with warmer air above it,’ he said. 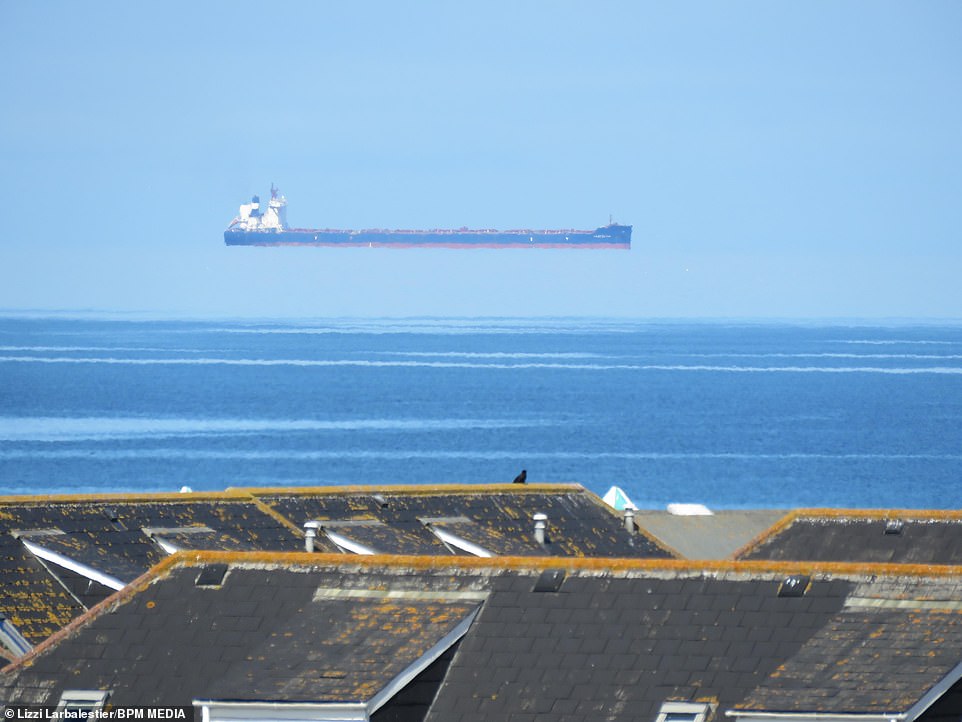 The mirage, which does not commonly occur in the UK, can even make land-based objects (such as mountains or buildings) appear as if they’re floating

‘Since cold air is denser than warm air, it bends light towards the eyes of someone standing on the ground or on the coast, changing how a distant object appears.

The mirage is thought to be the source of the legend of the Flying Dutchman, according to Jonathan Eyers’ 2011 book Don’t Shoot the Albatross!: Nautical Myths and Superstitions.

The mirage is not limited to the sea, and can be responsible for many unusual sightings, including mountains that appear to be hovering.

While sightings of superior mirages are often seen in the Arctic, they are uncommon in the UK.

A spate of Fata Morgana sightings occurred in March last year, including a 168,000-tonne cruise ship that appeared to hover off the coast of Bournemouth and a group of three liners that seemed to be pulling off the same gravity-defying stunt in Paignton, Devon.

Fata Morgana sightings tend to occur in clusters due to the atmospheric conditions they require.

What is a Fata Morgana?

A Fata Morgana is a type of mirage that distort distance objects, and can be can be seen on land or sea.

It’s caused when the sun heats up the atmosphere above the land or oceans, which creates a gradient of temperatures.

The air close to the surface is relatively cool and above that are layers of warmer air.

When light hits a boundary between two layers of the atmosphere that are different temperatures – and as a result different densities – it bends and travels at a different angle.

Our brain assumes that light travels in a straight paths, so when it bends, we think the object is where it would be if the light’s path runs straight.