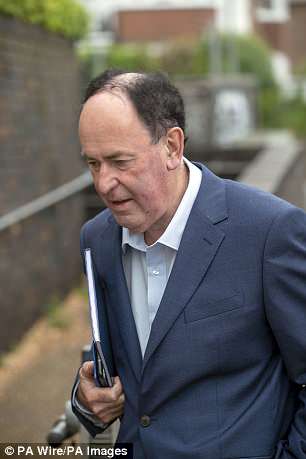 Two former private school teachers have been found guilty of sexually abusing pupils for more than a decade.

James Husband, 68, and Gary Dobbie, 66, were convicted at Hove Crown Court of abusing students at Christ’s Hospital School in Horsham, West Sussex, over a period of 13 years.

The prosecution was part of a wider police investigation into separate allegations of abuse by other former teachers at the school, with sports coach Ajaz Karim also convicted of sexual abuse earlier this year.

Husband, 68, of Wigginton in York, was initially charged with four counts of rape and five counts of indecently assaulting a girl as young as 14 between 1990 and 1994.

The CPS dropped three counts of rape against him but he went on trial accused of one count of rape alongside the indecent assault allegations.

Meanwhile Dobbie, of Albi, France, who used to live in Hereford, faced allegations of abuse against against six boys and two girls as young as 12 between 1998 and 2001.

Karim, 63, was found guilty in April of assaulting young girls at the prestigious school.

A former Ugandan refugee, his education was funded by Sir Barnes Wallis and he went on to coach sport at Eton College and The Queen’s Club.

The jury heard how Karim, of Hammersmith, west London, massaged a student’s ‘virtually naked body’ while she lay face down on the floor of his locked study.

Another girl was pushed up against a wall and kissed by her predatory teacher.

He claimed he was using alternative therapy the Bowen Technique and was teaching them breathing exercises to help when playing sports.

Husband and Dobbie take the number of former Christ’s Hospital School staff convicted of sexual offences to five, after ex-housemaster Peter Webb, 74, was jailed for four years after pleading guilty to 11 counts of indecently assaulting four boys, the youngest of whom was 11, over a decade during the 1970s and 1980s.

Retired teacher Peter Burr, 73, was also jailed for four years in January after admitting nine counts of indecently assaulting four boys aged 11 to 14 at the school between 1969 and 1973.

Founded in the 16th century, Christ’s Hospital charges boarders up to £34,000 a year and counts Sir Barnes Wallis, inventor of the bouncing bomb, and poet Samuel Taylor Coleridge as alumni.