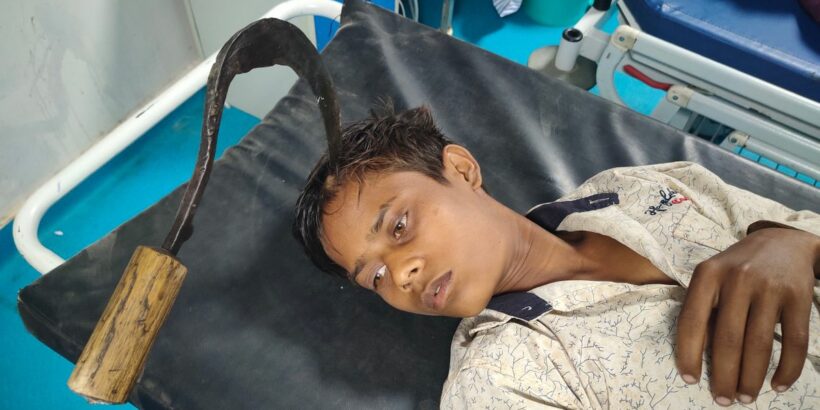 A teenager terrifyingly almost died after falling from his bed and landing head-first on a sickle.

Bhuppu Sen, 16, from India, was asleep in the middle of the night when he rolled over and landed straight on top of a sharp curved metal blade yesterday (March 16).

The sickle, which is used for harvesting, had been left precariously on the floor, and the teen reportedly forgot about it due to his light not working.

Incredibly no blood emerged from the teenager's head despite the tool piercing a whopping 4cm into his skull.

He was taken to hospital where doctors performed a CT scan on him before rushing him into surgery.

A three-hour operation carried out by a team of doctors led to the successful removal of the sickle.

Dr. Kuldeep Singh, the neurosurgeon who led the operation, said he was shocked the boy didn't end up paralysed or die from the horrific incident.

The lucky teenager is now reportedly resting from the accident but is understood to not be in any pain.

In related medical news in Pakistan, a teenager whose neck has been twisted a painful ninety-degree angle since she was eight months old can finally hold her head up thanks to radical life-changing surgery.

Afsheen Gul fell over while she was playing outside almost 13 years ago and since then she has been in constant pain.

But thanks to a fundraising campaign on GoFundMe, Afsheen’s parents were able to pay for a £26,000 miracle operation at the Apollo Hospital, in New Delhi.

Afsheen, who has cerebral palsy, was born healthy but an accidental slip when she was still toddler led to the bizarre injury.