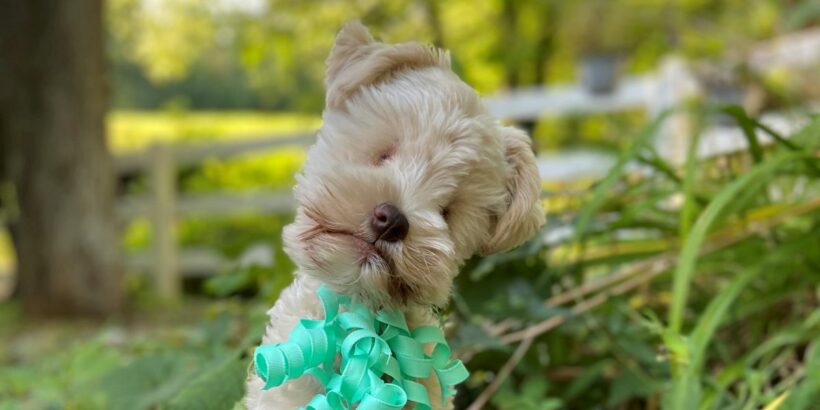 A teeny puppy called Teacup was born without eyes and suffering from health problems after she was bred from two runts.

The miniature schnauzer and wheaten terrier cross weighed 1lb when she arrived at the Big Fluffy Dog Rescue in Nashville, Tennessee.

The breeder brought the tiny puppy to the rescue centre after she couldn't feed her properly due to Teacup having no suckle response.

Teacup's parents were both the smallest dogs from their litters, known as runts, with the mum weighing 9lbs and the dad 11lbs.

Nicole Butler, 38, the Adoption and Foster Coordinator, said: "I couldn't believe how tiny she was and I was so eager to get some food in her.

"Teacup doesn't have any pain and doesn't know that she is disabled as she has never known life with vision.

"Nobody told her she's special so she gets along like every other happy puppy except she bumps into things from time to time and then just keeps on trucking."

Teacup arrived at the rescue centre at four-weeks of age on March 27, although the breeder treated her well she was not prepared for the puppy's complex needs.

As well as having no eyes, Teacup was born with her bladder adhered to her uterus and struggled to keep herself warm due to her tiny size.

The fur around her weeping empty eye sockets also needed to be cut short to prevent matting and infection.

Nicole, a surgery coordinator from Columbia, Tennessee said: "What they do is take runts, aka the smallest ones, from previous litters and breed them together to create an even smaller 'Teacup' or 'Toy' size.

"Runts can sometimes have issues of their own so breeding two of them together seems very counterintuitive to me, but toy breeds make the public at large swoon and I'm sure they bring big bucks.

"Sadly money is all that matters to so many of these breeders and not the health, temperament and overall integrity of the bloodline."

Despite this, Teacup is full of happiness and her favourite game is hide and seek – while attached to a harness and a long line.

Mum-of-two Nicole said: "She celebrates so big when she finds us.

The staff at the rescue centre hope to find Teacup a new loving home but her new family cannot have any large dogs that could squash her, can't have any steps and must have a fenced garden.