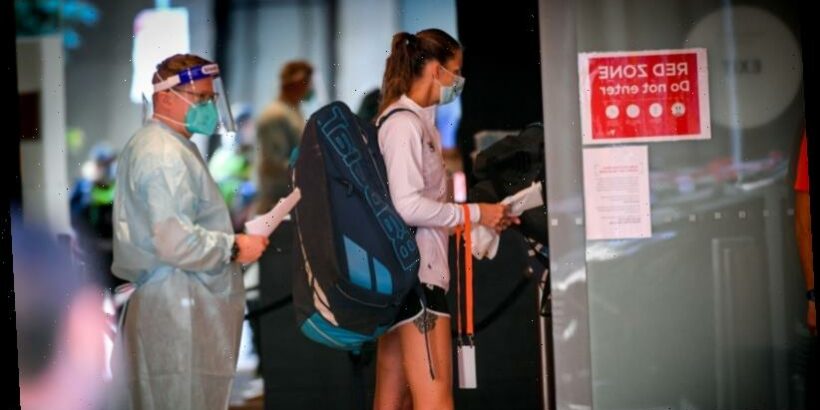 Tennis Australia has conceded tournament boss Craig Tiley spoke in error when he said the Victorian government would subsidise the multimillion-dollar cost of hotel quarantine for Australian Open participants.

The clarification came hours after Mr Tiley said the bill for the quarantine program was expected to top $40 million and would be partially paid by the state government.

However, Police Minister Lisa Neville later scotched the claim, insisting the Victorian government's consistent position was that it would not pay for hotel quarantine for those who had arrived from overseas for the tournament, in part because it would send a poor message to the public.

"We are asking, for example, Australians who return to contribute to their hotel quarantine cost … so it is appropriate that Tennis Australia similarly did that," she said on Wednesday.

In a later statement on Wednesday afternoon, Tennis Australia changed its position, confirming it "is funding the quarantine program".

Earlier in the day, Mr Tiley had said "yes, absolutely" when asked by Melbourne radio station 3AW if the state government would help with quarantine costs.

"The quarantine costs … we don't know that exact figure yet … will probably end up being over $40 million," he said.

"The state government [is] supporting and assisting us with that … [the cost] is still to be determined because we're still in the middle of that. Probably the end of next week or the week after we'll know exactly."

On Wednesday, it was also revealed that two more Australian Open tennis players, a support person and another individual linked to the grand slam had tested positive to COVID-19 in quarantine, although one player is strongly suspected of shedding the virus.

Victoria recorded a 14th consecutive day without a locally-transmitted case of coronavirus.

The public disagreement over quarantine bills was the second between the government and Tennis Australia in as many days, after Mr Tiley contradicted Chief Health Officer Brett Sutton's report on Tuesday that two players were among cases of COVID-19 connected to the tournament.

Stakes are high for both sides ahead of the tournament starting on February 8.

The Andrews government is desperate to avoid coronavirus leaking into the community from the 1200 players and officials who have flown into Melbourne, with quarantine hotels so far host to 10 confirmed cases, and 72 players in hard lockdown after they were deemed close contacts of confirmed cases.

Tennis Australia needs the Australian Open to proceed as seamlessly as possible amid suggestions from Mr Tiley the tournament could have lost its grand slam status if it was cancelled this year.

"If you miss a year of hosting and then you run the risk of potentially missing a second year, then you start to lose the importance," he said on Wednesday.

Sources inside the state government and Tennis Australia individually said the two sides were in constant negotiations over logistics and public relations, and while there were occasional frustrations, it would be wrong to characterise them as feuding.

In early December Victorian Treasurer Tim Pallas said the state government was negotiating with Tennis Australia over costs for the "relocation of the event because of the timing issues".

However, a spokesman for Mr Pallas on Wednesday said it was a general remark and reiterated Ms Neville's statement that the Victorian government's position from the start of discussions was that it would not pay for hotel quarantine.

Ms Neville confirmed on Wednesday that her government would cover the expected $40 million or more in hotel quarantine costs, before it "sent a bill" to Tennis Australia.

Opposition spokesman David Davis said the government should have had suitable quarantine arrangements for players organised long before the tournament, to avoid situations such as Wednesday's confusion.

"This again is a further outcome of [Premier] Daniel Andrews’ mismanagement across the country: the long second wave, the failure of the Victorian government to have a proper hotel quarantine system in place," he said.

From mid-2020 Melbourne residents endured months of city-wide lockdowns, which saw most businesses close their doors, due to Victoria's second major outbreak of the virus, after cases escaped hotel quarantine.

Following complaints from players who this week compared life in hotel quarantine to prison, Spanish player Roberto Bautista Agut also had harsh words for the Victorian government on Tuesday: "These people have no idea about tennis, about practice courts, no idea about anything," he said.

The world number 13 then issued an apology on Wednesday, calling the comments "a private conversation taken out of context" before labelling Australia's efforts to limit the spread of the virus as "admirable".

"These are hard times for athletes and for society in general. I thank all the people who are making playing tennis again possible," Mr Agut said.

Of the four new cases among players and officials in hotel quarantine, Ms Neville said the player strongly suspected of shedding the virus was already in lockdown because they arrived on a flight with another positive case.

A second player and their support person who returned positive swabs will not be allowed outside their hotel rooms while the Department of Health and Human Services reviews their test results to determine whether they are also shedding the virus.

People deemed viral shedders are not contagious and show up as positive for COVID-19 because tiny fragments of the virus remain in their body after an earlier infection.

Infectious diseases experts say viral shedding can continue for several months after a person's symptoms of coronavirus have passed.

Get our Coronavirus Update newsletter

Stay across the news you need to know related to the pandemic. Sent Monday and Thursday. Sign up here.