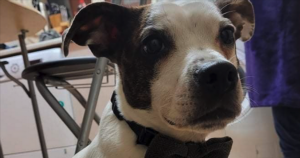 A terrified woman has spoken out about the horrifying moment her beloved pet from the jaws of a dangerous dog.

Misa Kontrova was walking her Jack Russell-cross for a walk on January 21 at around 9 pm when they were savagely attacked.

The 20-year-old had just left her home in Inverness when she noticed a man out with his dog.

She told the Daily Record that as soon as she stepped outside her home, his dog lunged at her dog Harley.

But while the dog, believed to be an Akita, attacked, she claims that the owner stood by and did nothing to stop it.

Misa said: "The man didn’t say a word to me. He had the dog between his legs. I would have assumed he would have said something if he thought there was going to be any trouble.

"I took a step forward and the next thing I know this big dog is on top of Harley. The owner didn't try to hold his dog back. He stood there and watched as it unfolded."

The vicious animal shook Harley in its mouth while Misa screamed in horror. She grabbed the dog in a bid to free her four-legged friend from its jaws before rushing back inside.

She continued: "I stuck my hand in the dog’s mouth and my other hand on Harley and managed to separate them. Then I rushed Harley into the building out of the way.

"I don't even remember thinking about how to stop the attack. I just knew Harley would be dead if I didn't do anything. I turned around to look outside for the owner and he had left.

"I went back in and screamed for my partner. I couldn't even explain properly what had happened, I was just hysterical. Harley was yelping and I realised how badly injured he was."

The beloved six-year-old pet was rushed to the local vets with blood seeping from puncture wounds to his body.

Misa had to fork up for the hefty vet bill of £600 to get little Harley stitched up. She believes the pair had a 'lucky' escape and Harley would have died if she hadn't intervened.

She added: "The dog had Harley in its mouth on his side and was shaking him. He's got bite punctures on his side.


"He is only just getting back to himself on Wednesday, the whole weekend was just awful. If that dog had grabbed him by the throat, he would have been gone in seconds. I was lucky too. I did the thing you aren't supposed to do but I had to make sure my dog wasn't killed. He's my baby.

Misa reported the incident to the police after the owner fled the scene following the horror attack. Now Misa says she is too scared to walk Harley alone and has shared her story as a warning to other local dog owners. Police Scotland have been contacted for comment.