As Russian missiles pounded Ukraine’s second-largest city Kharkiv and a 64-kilometre convoy of tanks and other vehicles threatening the capital, one photographer captured a moment of quiet in Kyiv; a zookeeper, comforting an elephant.

The photo of the elephant, Horace, and keeper, Kirilo Trantin, was taken on Wednesday AEDT at Kyiv Zoo, where some workers remain onsite around the clock to comfort the animals during air raids. 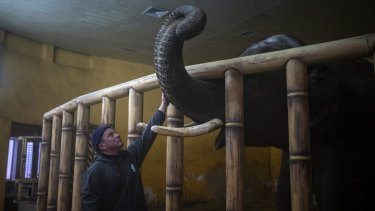 The zoo has used Facebook to keep its concerned followers up to date, and on Monday AEDT said: “Animals are terrified by the loud sounds of explosions, but our vets are constantly monitoring their condition.”

The zoo is closed to visitors, but about 50 “critically needed” workers have stayed there to care for the animals in a time of “horrible stress” – even in the evening.

“That night was very tense – loud explosions were heard until the morning,” the zoo said in another post on Sunday. “Fortunately, there were no direct hits on the territory of the zoo.”

As the only large zoo in Kyiv, it is home to the only gorilla in Ukraine, “Tony”. The zoo said staff were trying to communicate with the animal as much as possible because it had “began to miss visitors”.

The elephant’s name is Horace, according to a history of elephants at the Kyiv zoo published in 2017, when he was the sole surviving animal in the elephant enclosure after the deaths of Boy and Dirndl.

Two goats were born at the zoo on Sunday, and the administrators reported the zoo had all the food, electricity, heat, and water it needed for the moment.

US-based magazine Newsweek reported Polish Zoo Poznań was working with zoos and rescue partners in Ukraine to evacuate as many animals from the country as possible; among them, those from the Save Wild animal sanctuary near Kyiv.

In a Facebook post, the Polish zoo said that – as soon as they successfully evacuated animals from Kyiv – they would be collecting donations of equipment and feed.

Hours earlier, they said one of their transport trucks was surrounded by Russian tanks and they “lost hope”, before “Kiev defenders carried our transport through the occupation line”.