THIS is the terrifying moment a “lava tsunami” in La Palma hurtles towards a town, as the volcanic eruption on the Spanish island continues.

The dramatic footage of one of the lava rivers pouring down the mountainside was recorded by the Canary Islands Volcanological Institute (Involcan) and posted on its Twitter site. 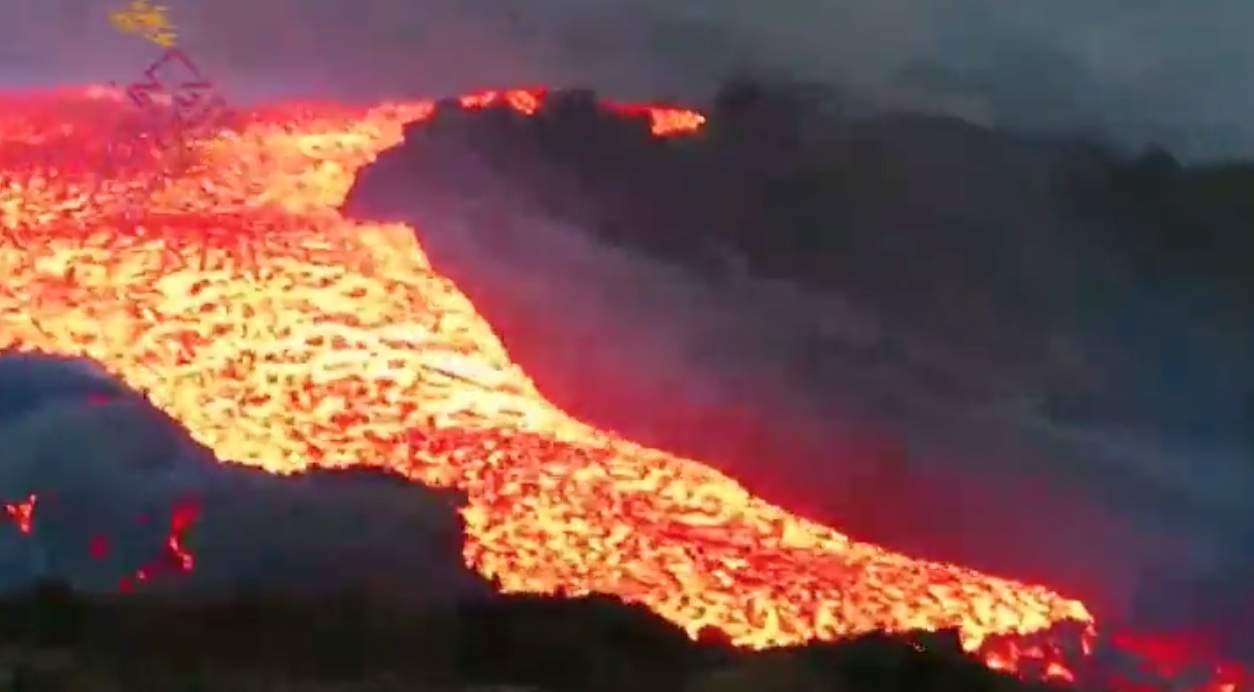 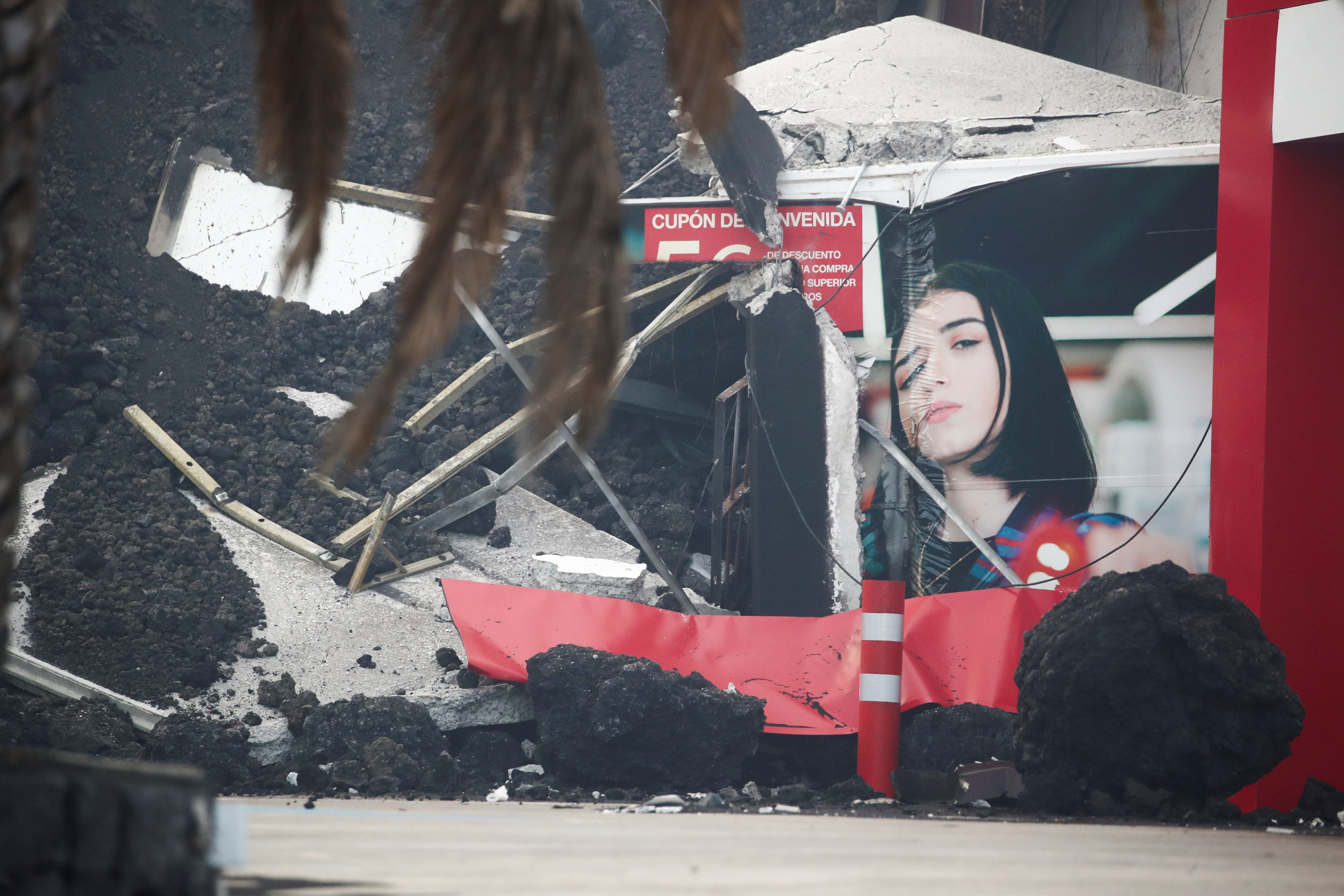 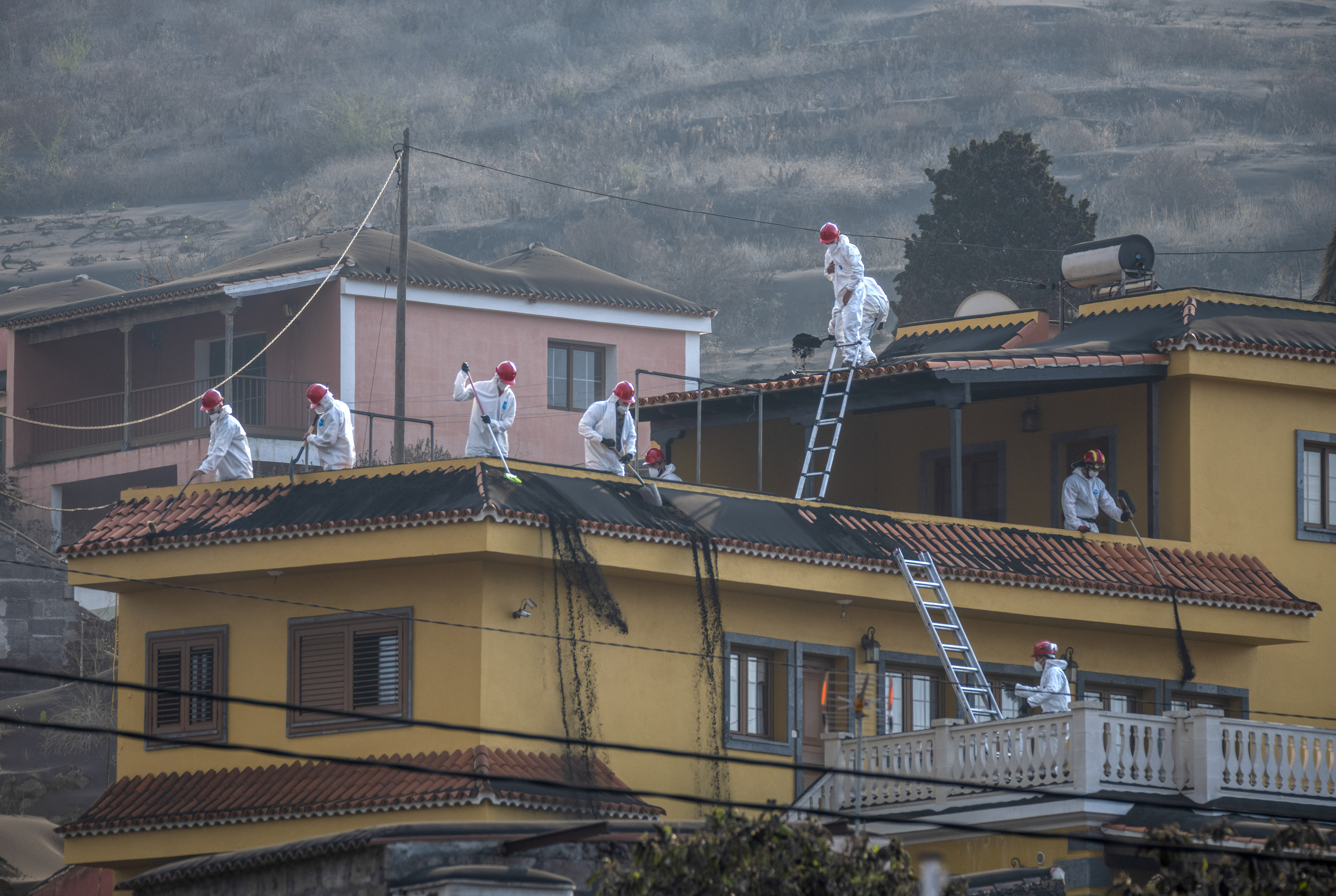 "One of our crew was able to film a truly lava ‘tsunami’. Amazing speed and overflow of the lava channel," the organisation posted.

The video shows the red-hot lava river travelling at high speed and shows buildings in its path as it travels towards the sea, devouring everything in its path.

The emergency services are continuing to monitor the latest effusions from the La Palma volcano.

There are two main rivers. The original one, with little contribution of lava at present, has three branches: two to the south of the Todoque mountain (one is the one that has formed the lava delta or fajana when falling on the waters of the ocean) and a third located on the mountain.

The second, which is the one that currently worries authorities and researchers the most, is to the north of the original stream and moves in a northwesterly direction with two appendages: one, which presents high intensity and a wide path, and the other which is crossing an industrial park in the La Laguna district diagonally.

The evolution of the latter has forced the eviction of 300 more people, bringing the total number of evacuees since the beginning of the eruption to 6,800.

Regarding seismicity, the Institute points out that, although an increase was detected (24 earthquakes this morning), "significant surface seismicity is not being recorded."

Air quality is "reasonably good" and so far the La Palma airport remains open and operational.

The tanker Tomasso S, loaned by the Ministry for the Ecological Transition and the Demographic Challenge and with a capacity of 7,500 cubic metres, docked yesterday in the port of Tazacorte.

The purpose is that the tanker, together with two portable desalination plants that are being installed in Puerto Naos, provide irrigation water for the cultivation areas, mostly banana plantations, which were left without supply when the lava from the La Palma volcano broke the pipeline. that supplied them.

The idea is to guarantee the maintenance and survival of the plantations, beyond the current production, which are also being affected by the ash from the volcano.

The Ministry of Education, Universities, Culture and Sports of the Government of the Canary Islands has announced that next Monday, October 18, classes will resume in the educational centers of the municipalities of Los Llanos de Aridane, El Paso and Tazacorte, a measure that affects 4,606 students and 583 teachers.

Meantime, nine organisations on La Palma have joined forces to appeal to tourists to come to the island, saying it is safe.

In an open letter, they say: "La Palma is a safe territory. We all lead a normal life, although with deep sadness and concern for those affected."

"Our companies, our restaurants, our hotels, our transport, our stores and services and our markets work as usual. And now, more than ever, we need you to visit us and help us overcome this situation of natural catastrophe, which affects 8% of our territory."

"It is true that ashes have reached a good part of the island, but our cities and towns are clean. In the health activity we work with absolute normality and that the island public system is sufficiently prepared for any emergency situation if necessary."

Tour operators such as TUI had recently cancelled flights to the island over fears about the volcanic activity.

Two local companies, Ticom Soluciones and Volcanic Life, have also been using drones to drop food and water to stranded dogs in the area of Todoque which has been badly affected by the disaster.

Several dogs had been spotted trapped in a walled yard and footage has been released of the drones dropping supplies to the animals who ripped the packages open with their teeth.

The companies have been helped by vets, who decided what kind of food and how much should be dropped.

The local council said that helicopters cannot fly in the area because of the hot air from the lava and volcanic ash that can damage rotors, so the dogs cannot be airlifted to safety.

Previously, scientists have feared the ongoing volcanic eruption could trigger a huge tsunami that could cause "catastrophic effects".

According to the latest data from the European observation system Copernicus, the lava has completely or partially destroyed 1,186 buildings, with 95 more at risk.

Julio Pérez, the regional minister for security on the Canary Islands, said: "We cannot say that we expect the eruption that began 21 days ago to end anytime soon."

They estimated that the giant waves generated by a flank collapse would hit the Moroccan and Spanish coasts in two to three hours.

The wave would then surge across the Atlantic to strike the Brazilian, US and Canadian coasts in nine hours.

This is the third volcanic eruption on La Palma Island, home to 85,000 people, in a century, although the last one dates back to 1971. 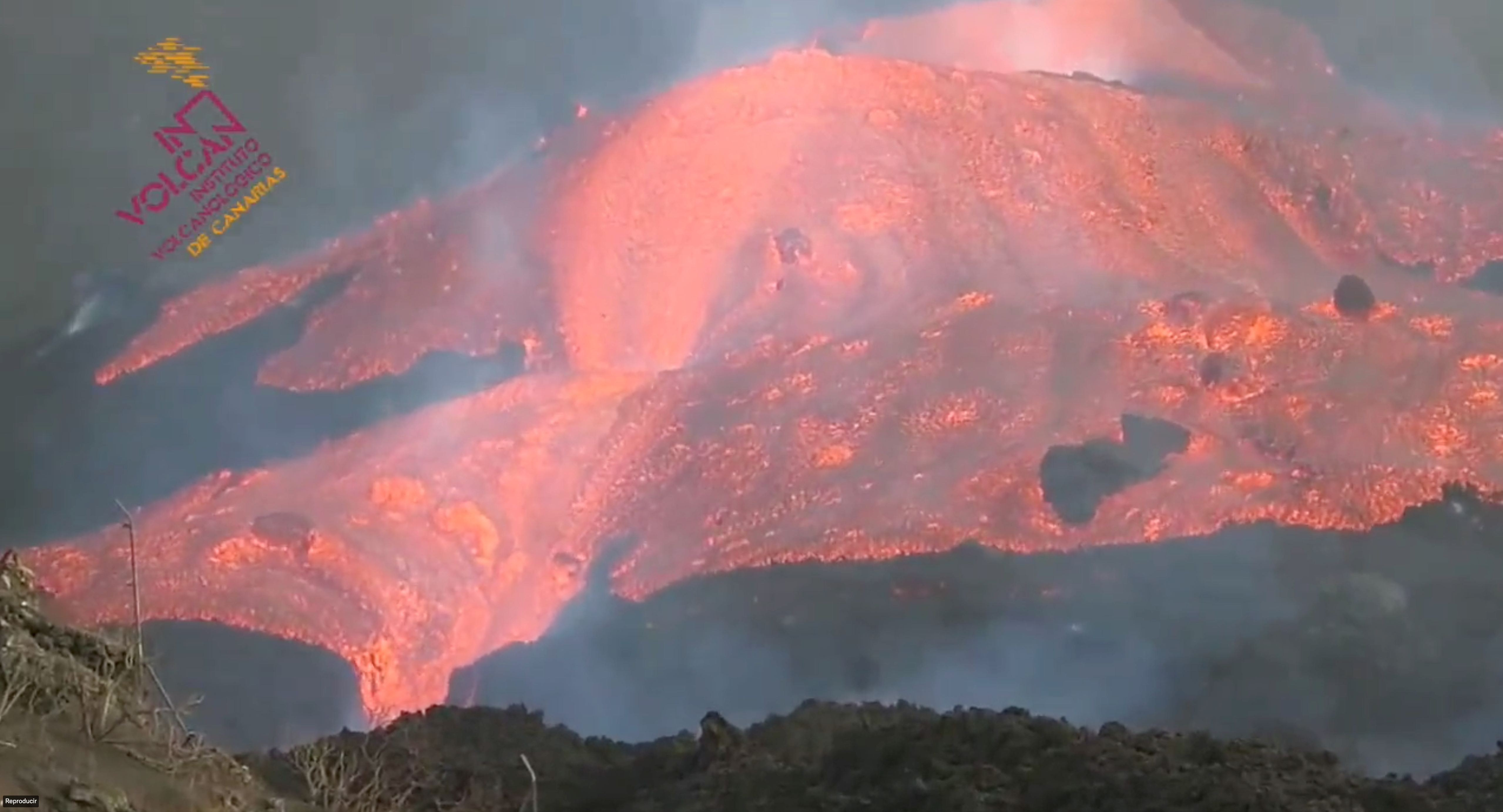 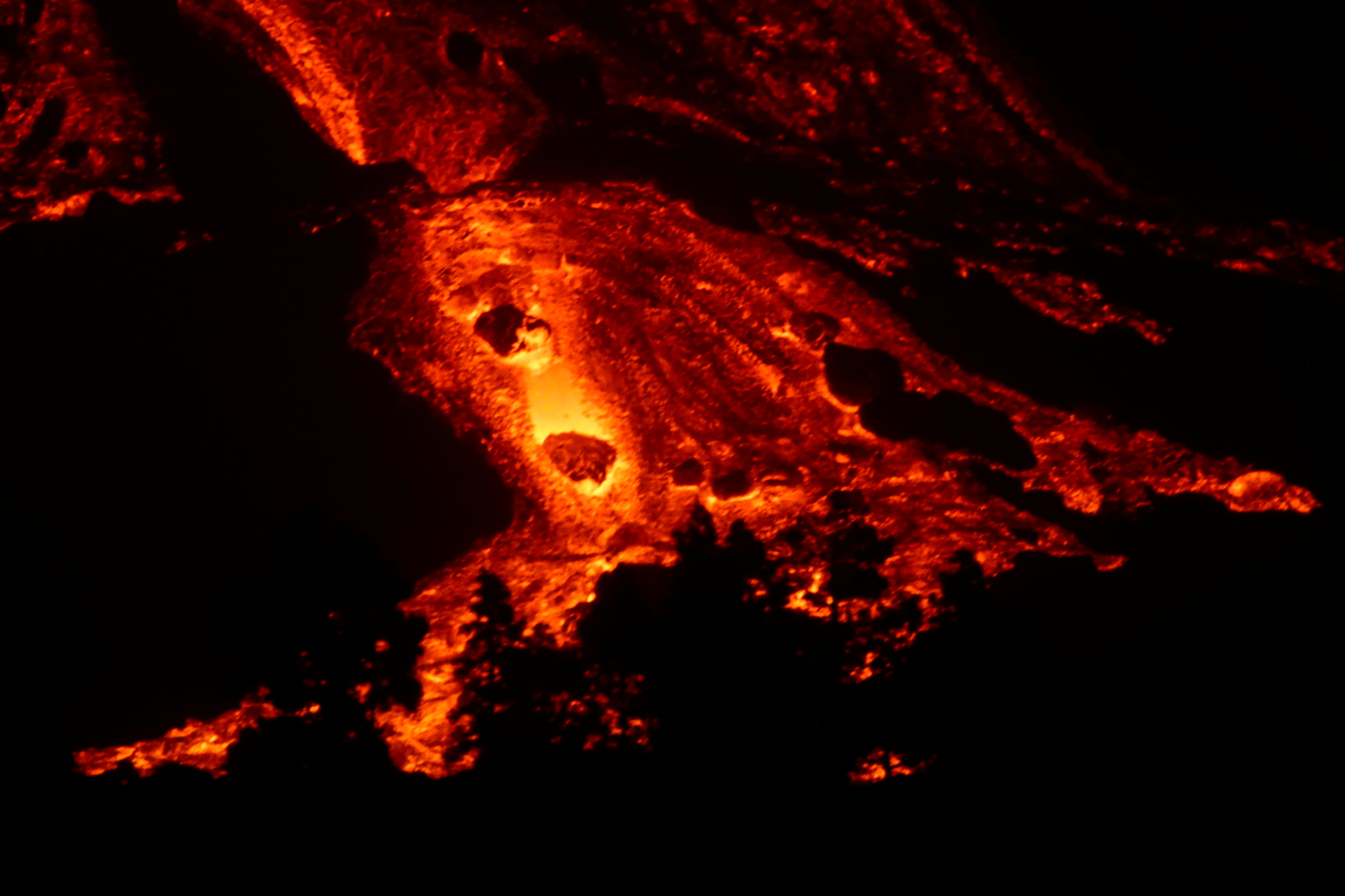