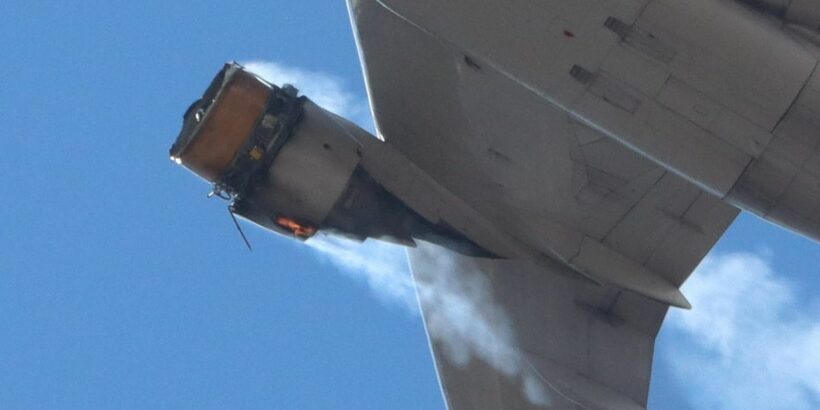 A terrifying video shows the moment a plane engine burst into flames and wreckage landed into the gardens of people's homes.

The packed United Airlines flight had to make a dramatic U-turn back to the airport after an engine explosion.

Videos and pictures showed plane debris falling down into homes on Saturday afternoon.

Flight UA 328 safely landed back to Denver International Airport in Colorado at 1:30pm after the scary encounter.

On board the plane were 231 passengers and 10 crew members, reports The Sun.

Locals took to social media to share footage of the terrifying scenes.

A statement from United Airlines read. "Flight 328 from Denver to Honolulu experienced an engine failure shortly after departure, returned safely to Denver and was met by emergency crews as a precaution.

"There are no reported injuries onboard, and we will share more information as it becomes available."

After the engine caught fire, the flight looped back to its departure point in Denver.

A Twitter user wrote: "I saw an explosion on this low flying aircraft over @broomfield about 45 minutes ago.

"Debris fell from the plane and left a black cloud of smoke. The plane continued on."

Another user described seeing "raining metal" after hearing and seeing an explosion.

A video taken by a resident shows the plane flying in the sky leaving behind black smoke.

The person taking the video can be heard saying "something blew up, there's like a black cloud of smoke right there."

In a chilling picture a "giant metal engine piece" can be seen in a resident's garden.

The pilot can be heard in a mayday call from the plane, he said: "Need a turn immediately. May day, may day," reports The Sun.