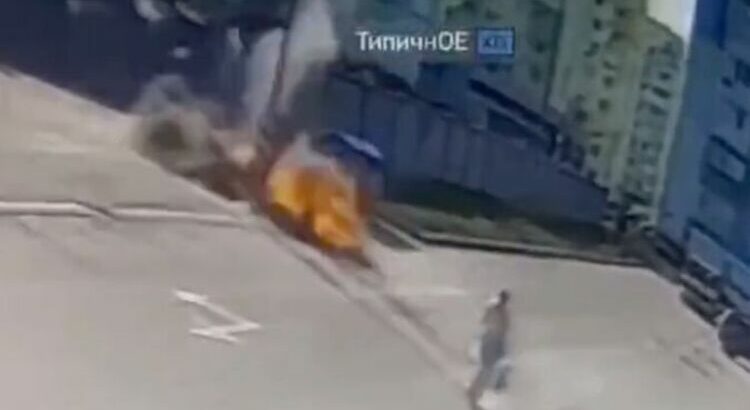 Russian forces stepped up their bombardment of Ukrainian cities on Monday, after somewhat of a recent lull in hostilities. Major cities such as Lviv, Kyiv and Kharkiv came under attack once again from Vladimir Putin’s army, as Moscow prepares for a new major offensive in Ukraine’s east. Kharkiv, in the country’s north, has endured heavy shelling since early on in the war and has sustained considerable damage to residential buildings, as well as seeing many of its citizens maimed and killed.

A new video doing the rounds on social media captures the moment a woman miraculously cheats death in Kharkiv, after a missile explodes near her.

The clip shows the woman walking towards a block of apartments in the middle of a deserted road.

She appears to have been shopping, as she is carrying two plastic bags.

Towards her on her left, two other people are making their way along the pavement.

The two passersby start to run for shelter, as they realise that a missile is incoming.

However, the woman seems to not appreciate the danger she is in, as she serenely continues on her way.

The missile then strikes, landing within a metre or two of her and creating a fireball. Debris from the explosion flies in all directions.

The startled Ukrainian falls to the ground, where she remains for a moment or two to compose herself, before getting up and heading inside.

The video was posted to Twitter by Olena Halushka, a board member of the Anti-Corruption Action Centre.

“This is how the life of Ukrainians looks under Russian bombs and rockets.

“For how long will it continue?”

Seven were killed in Lviv, in Ukraine’s west, after it was hit by multiple missiles.

The Ukrainian military said it believed Moscow was now launching its much anticipated attack to try and seize more territories in the east of the country.

It is believed that Putin is trying to take all of the Donetsk and Luhansk regions in this next phase of the war.

Ukraine has some of its most experienced and best trained military units defending the east.

He added: “They began their attempt to start the active phase.”

Mr Danilov noted Russian troops had captured the town of Kreminna, about 50km (31 miles) northeast of Kramatorsk, but Ukrainian troops were “holding the line” in the other areas.

Earlier on Monday, Ukraine’s Armed Forces Command also said it was seeing signs that Russia was beginning its new offensive in eastern Ukraine.