Student, 20, tells of her terror after thieves follow her back to her flat then break in to steal her handbag, Michael Kors purse and laptop while she cooked dinner 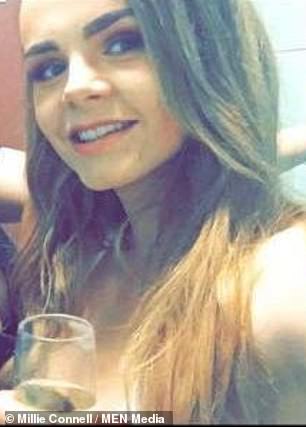 Hull University student Millie Connell, 20, believes she was followed back to her flat

A terrified university student believes she was followed back to her flat by thieves who then broke in and robbed her.

Millie Connell, a University of Hull student, returned home to her Newland Avenue flat on Monday evening after spending the night studying in the nearby Cottingham Road campus library.

After dropping her belongings in her bedroom, Millie, 20, went into her flat’s kitchen to cook but, just 30 minutes later, discovered her bedroom had been ransacked.

She believes thieves ‘followed her home’ and waited for her to leave her bedroom, before breaking in and stealing her handbag, purse, laptop and folders.

‘I decided to drive home from the library because of everything that is going on at the moment,’ she said.

‘I got the nearest parking spot possible to my flat and I quickly ran down the dark alleyway to get to the stairs leading up to the flat.

‘I’m always on guard when walking down the alley anyway, I really don’t like it because all sorts of people hang about down there, but this time I just kept my head down and got into the flat as soon as possible.

‘I went into my bedroom to drop my bags off, and went straight to the kitchen to start cooking dinner. About half an hour later my stuff was gone.’

It is believed the bag was taken sometime between 7.45pm and 8.15pm, with the debit card used several times by the thieves afterwards.

Millie said: ‘I can only think I’ve been followed. You can see my bedroom from the main road and it seems as though they have watched me turn the light off and decided it was the right time to run into my bedroom and grab my bag’

Mollie currently lives in a flat above a Newland Avenue restaurant with seven other housemates, four of whom were inside the flat when the bag was snatched.

The second-year politics student, who has been left so terrified she has returned to her Nottinghamshire home, says her housemates heard footsteps on the metal stairs leading up to the flat but thought it was Mollie making several trips to her car.

‘I can only think I’ve been followed’, she said. ‘You can see my bedroom from the main road and it seems as though they have watched me turn the light off and decided it was the right time to run into my bedroom and grab my bag.

‘I thought I was going mad at first because I couldn’t find my bag anywhere, so I rang my mum and dad who told me to check with my bank if any transactions had been made.

‘That’s when I found out it had been used three times in half an hour, and I just felt so scared I went straight home to Mansfield.

‘I don’t want to be in that room knowing someone has followed me.’

Millie is now hoping to retrieve some of the stolen items, and is hoping people who come across them can call the police.

Among the belongings taken by the thieves were a faux leather shoulder bag, a grey/nude Michael Kors purse containing her debit card and driving licence, a white Acer laptop, and personal diaries and folders.

A spokesperson for Humberside Police said: ‘We received a report of a sneak-in burglary at a flat on Newland Avenue in Hull that happened around 8pm on Monday 25 March.

‘A handbag containing a purse and cash along with a laptop was stolen while a woman was in the flat at the time.