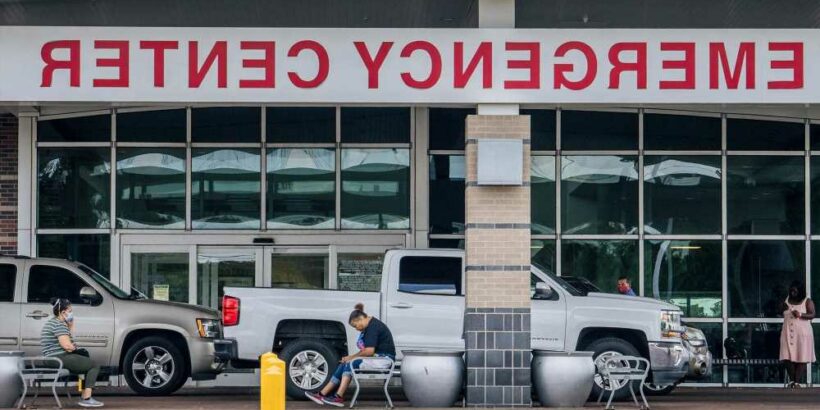 Say goodbye to Hollywood: The city actors are flocking to during the pandemic

A hospital system in Texas is gearing up with tents for a potential overflow of patients as the latest uptick in COVID-19 cases — driven by the highly contagious Delta variant — pushes its hospitals to capacity.

Harris Health System in Houston set up the tents at Lyndon B. Johnson Hospital, where 100 percent of its intensive care units are full with mostly COVID-19 patients, CNN reported.

“There is no pre-determined time for when they will begin to be used, but they want the tented environment to be ready to go in the event they are needed,” Harris Health spokesperson Bryan McLeod told the outlet.

The arrival of the tents came after the healthcare system’s two hospitals saw a sharp increase in new patients being admitted for the virus.

The Delta strain of the virus, which first emerged in India in December, now accounts for around 73 percent of new cases in the Lone Star State, according to Center for Disease Control and Prevention figures.

“What is intriguing about this surge is not so much the magnitude of the numbers, but the speed at which the numbers are going up,” President and CEO Esmaeil Porsa told CNN.

“It took us five weeks to get from one (patient) to 120. When I look at the last surge, it took us three months — the rapid rise in the amount of Covid patients is very concerning.”

Currently, there are about 122 patients being treated for the virus at its two hospitals, Porsa said.

The second, Ben Taub Hospital, is currently at 95 percent capacity in its intensive care unit, where 27 percent of patients have tested positive for the virus, CNN reported.

“The situation is bad and only getting worse. We are not heading towards a crisis, we are in the middle of a crisis,” Porsa said.

He directed health officials to use staffing agencies to find additional medical staff from beyond state borders.

Around 87.1 percent of all hospital beds in the state are currently in use — the highest level since the start of the pandemic, the Texas Tribune reported.

“Everybody who’s unvaccinated needs to get a vaccine,” Dr. David Callender, president and CEO of Memorial Hermann Health System, told the newspaper.

“That’s what will keep us out of those terrible situations where people need care in a hospital and they can’t get it.”