Tham Luang: Late on Wednesday evening, as the sun set on the Khun Nam Nang Non Forest Park, one of northern Thailand’s most revered monks arrived at the Tham Luang cave complex.

Kruba Boonchum, 53, was mobbed as he arrived to pray with the families of the 12 Thai soccer players and their coach for a safe rescue. 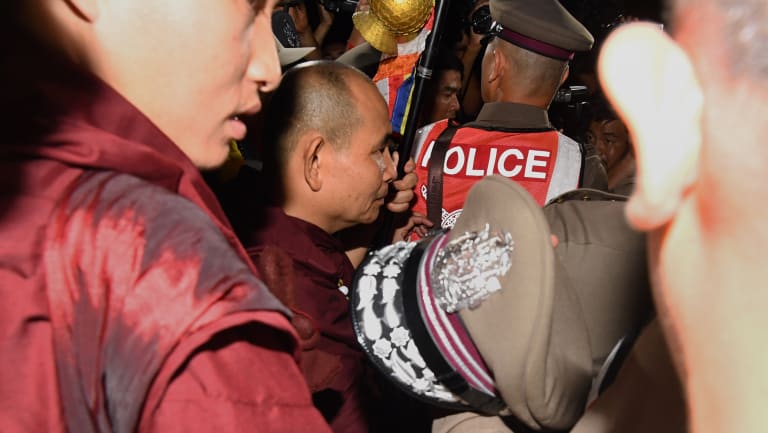 Kruba Boonchum, second from left, moments after returning from Tham Luang cave where he prayed with the trapped boys’ families.

As officials rushed back and forth, carrying golden Buddhas, a media crushed quickly developed and Thai TV carried the moment live.

But Boonchum said not a word. Instead, after handing out some thumbnail-sized Buddhas, he turned and walked towards the entrance of the cave, families by his side.

And while the arrival of a monk to pray for the safe return of the Buddhist kids trapped deep inside the cave may seem routine, Kruba Boonchum’s connection to this particular cave is the stuff of legend. 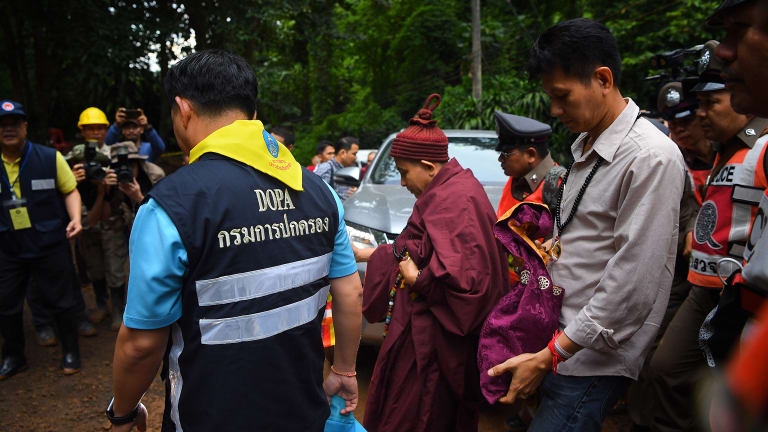 Kruba Boonchum, centre, is believed to be a reincarnation of the boy who loved the princess.

The story of the Princess of Sip Song Panna matters a great deal to locals.

Indeed, the cave is known to locals as the Tham Luang Nang Non – the great cave of the sleeping lady – and viewed from the main road that leads into the national park, the Khun Nam Nang Norn mountain does vaguely resemble a person laying down.

That sleeping lady is the princess, locals say.

Local woman Khankaew, who was working on one of the free food stalls keeping soldiers and rescue workers fed on Thursday morning, told Fairfax Media that “everyone” knew the story of the princess and the cave.

“The princess was very beautiful and she fell in love with a local  stable hand and became pregnant,” she said. 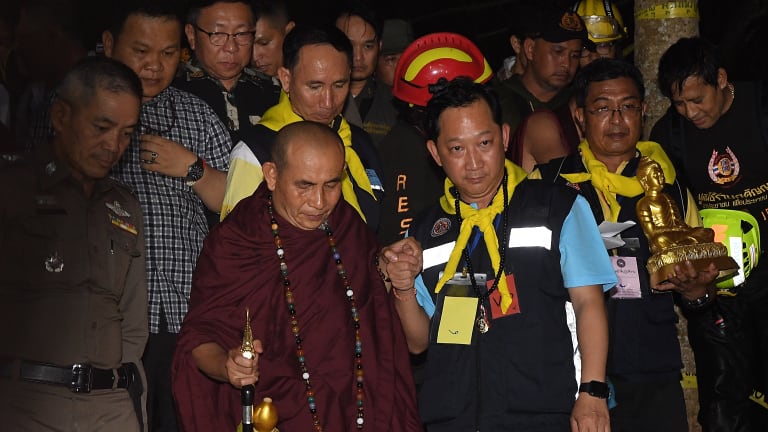 Kruba Boonchum prayed with the families to the Princess spirit.

That angered the princess’ father, Khankaew said, and although the pair tried to flee, the father had the boy killed by his soldiers.

Devastated, the princess stabbed herself in the heart with her hair pin.

Over time, a mountain formed where the princess died and legend now has it that the water that flows through the cave is the dead princess’s blood.

So what does this have to do with Kruba Boonchum?

Quite a bit, actually.

Some believe he is the current reincarnation of the princess’ dead stable boy lover, the father of her unborn child.

So when Boonchum walked into that cave mouth to pray to the spirit of the dead princess, it was personal. 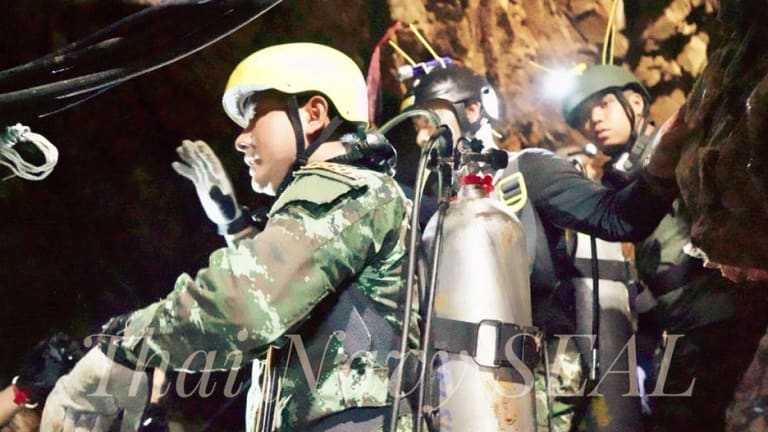 Thai Navy SEALs work to drain water out of the cave as fast as possible. on Wednesday.

In the eyes of some locals, he was praying to the woman he once loved to release the young soccer team and their coach.

Khankaew said the visit of the monk was very important to locals as it gave people hope, “he is a great Monk in this area. He was praying for those kids and if he comes and prays, it will help”.

Pubess, working at the next stall at the base camp of the caves, said the visit of the monk was “very important, it helps people to believe and have heart, it makes people feel more happy”.

He grins when asked if he believes in the legend of the princess. “Half-half”, he says.

But both of them look to the heavens – not to the gods – when asked when the boys and their coach might be freed.

“I think they will rush it because rain is coming soon,” Pubess said. Khankaew nodded her agreement.

In truth, though, no one, perhaps not even the princess of Sip Song Panna, knows for sure.