Voices of the divers can be heard on footage as they talk to the terrified boys after their torches revealed them cowering in a darkened chamber – telling them "many people are coming, it's OK". 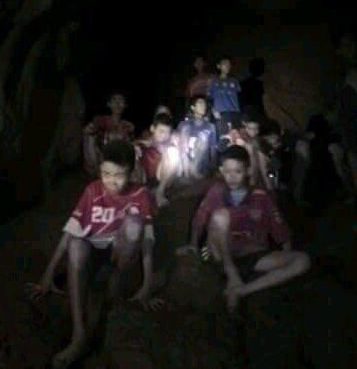 The team from the UK had been supporting Thai navy seal divers and rescue workers in a desperate search for the lads as water levels rose in the underground caverns.

They had been trapped down there by flooding after entering the Tham Luang Nang Non cave on June 23.

On the extraordinary helmet-cam footage one rescuer can be heard saying to the group: "There's only two of us, you have to dive."

But he then allays concerns by reassuring them: "We're coming, it's OK. Many people are coming, we are the first. Many are coming." 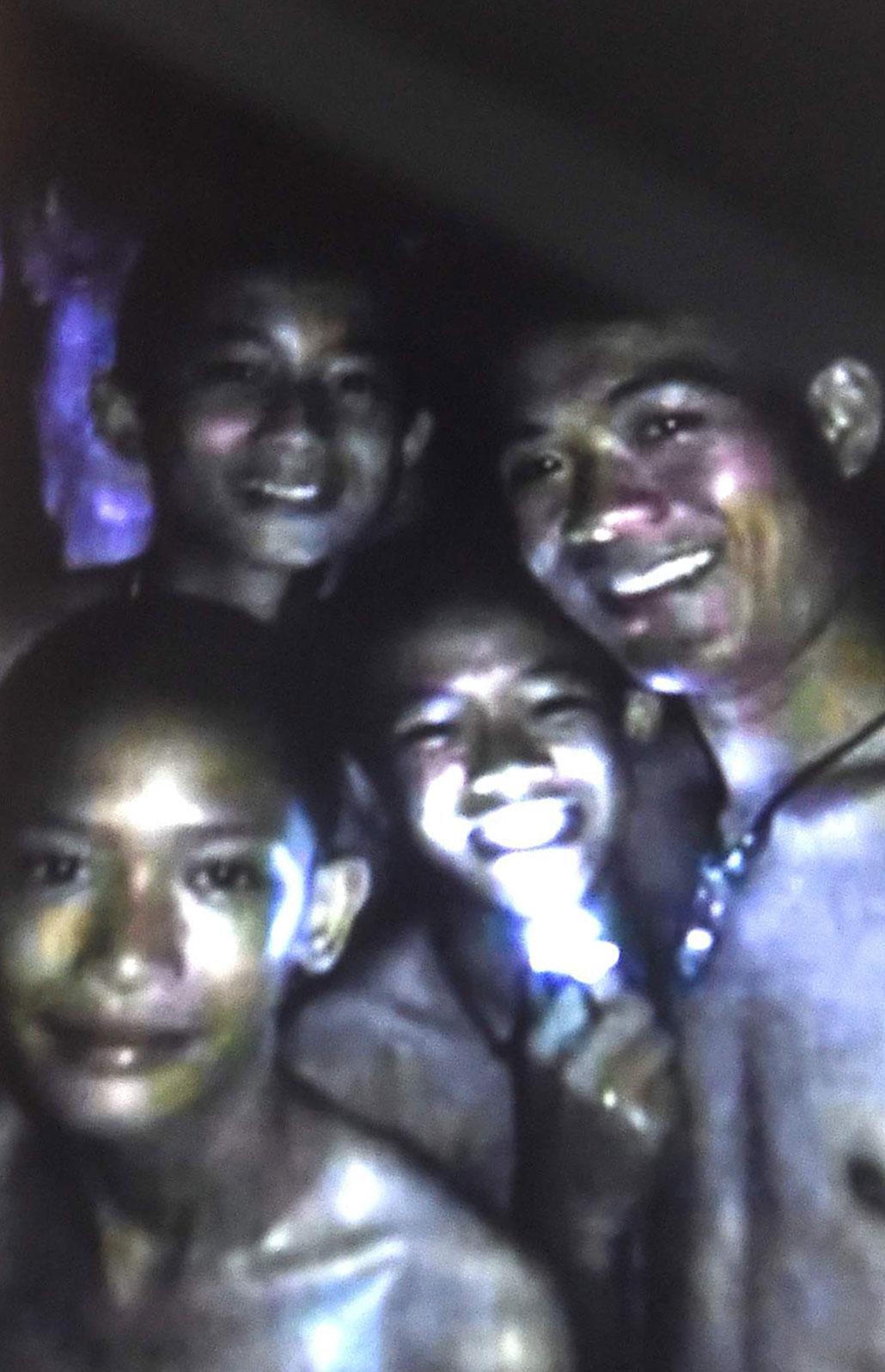 As reported, they flew out along with Robert Harper, who also took part, and are from Derbyshire Cave Rescue.

They are global experts in exploring underground systems.

When asked by one of the bewildered boys about where they came from, one of them replied: "England, the UK." 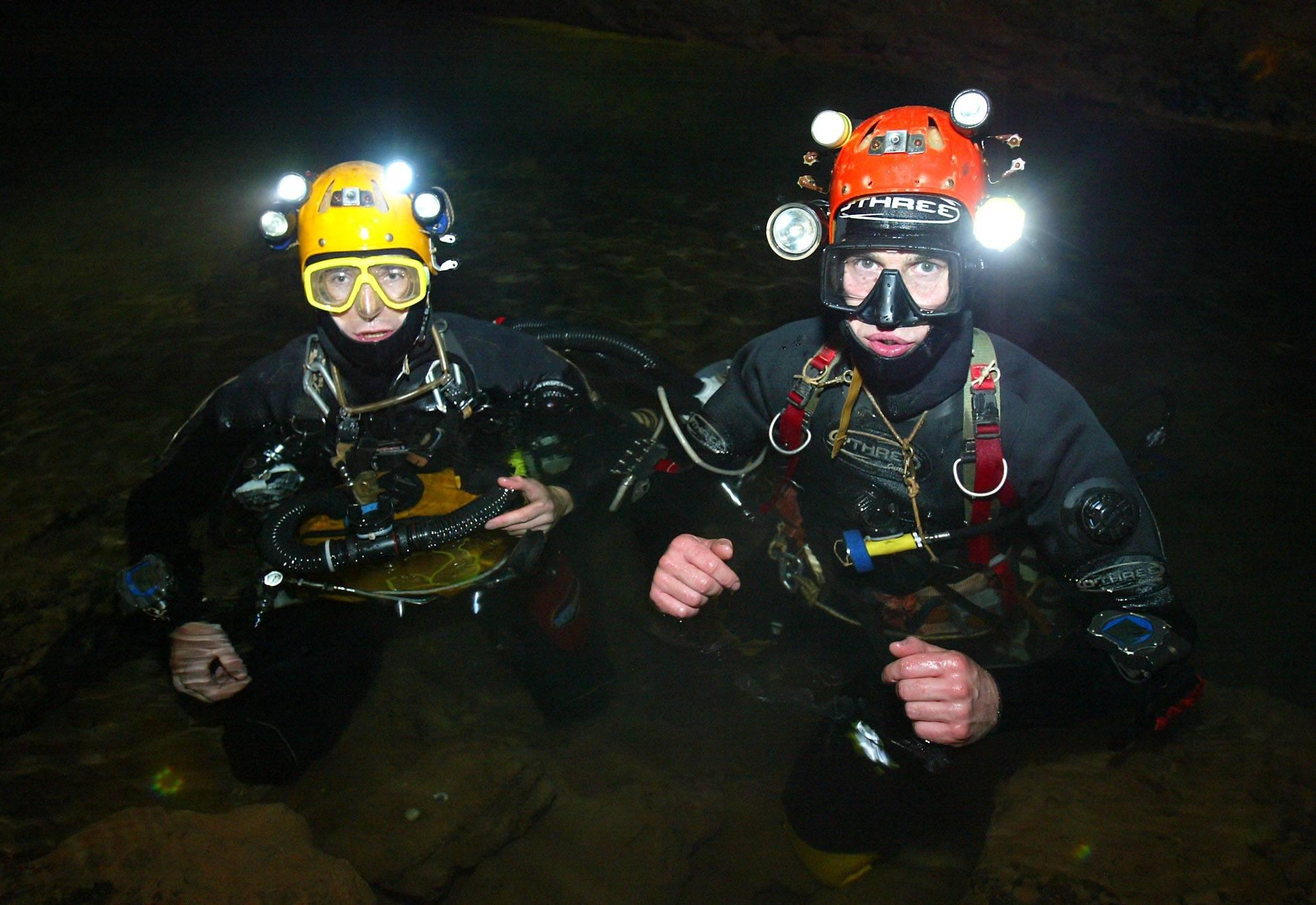 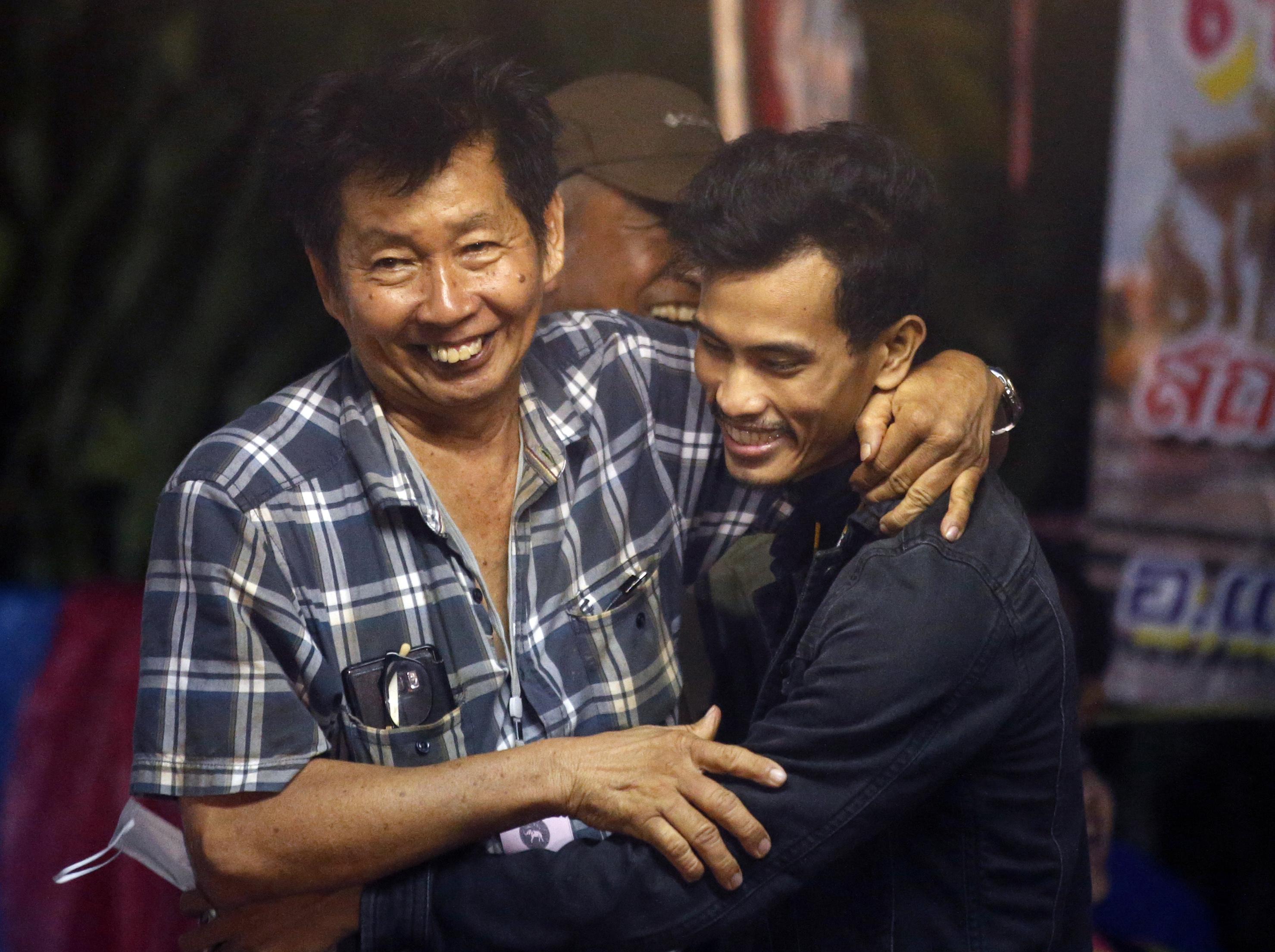 But while parents jumped for joy, the region's governor, Narongsak Osottanakorn, cautioned the stricken kids were not out of peril yet.

He said: "We found them safe. But the operation isn't over."

The problem the rescuers face is how to extract the group safely as water continues to rise.

Over the past week heavy rain has sent torrents of floodwater into the cave network – the country's fourth longest.

Divers are now concentrating on securing a rope line and placing oxygen tanks along the narrow passageway that they think will lead them to the boys, aged 11 to 16, and their 25-year-old coach. 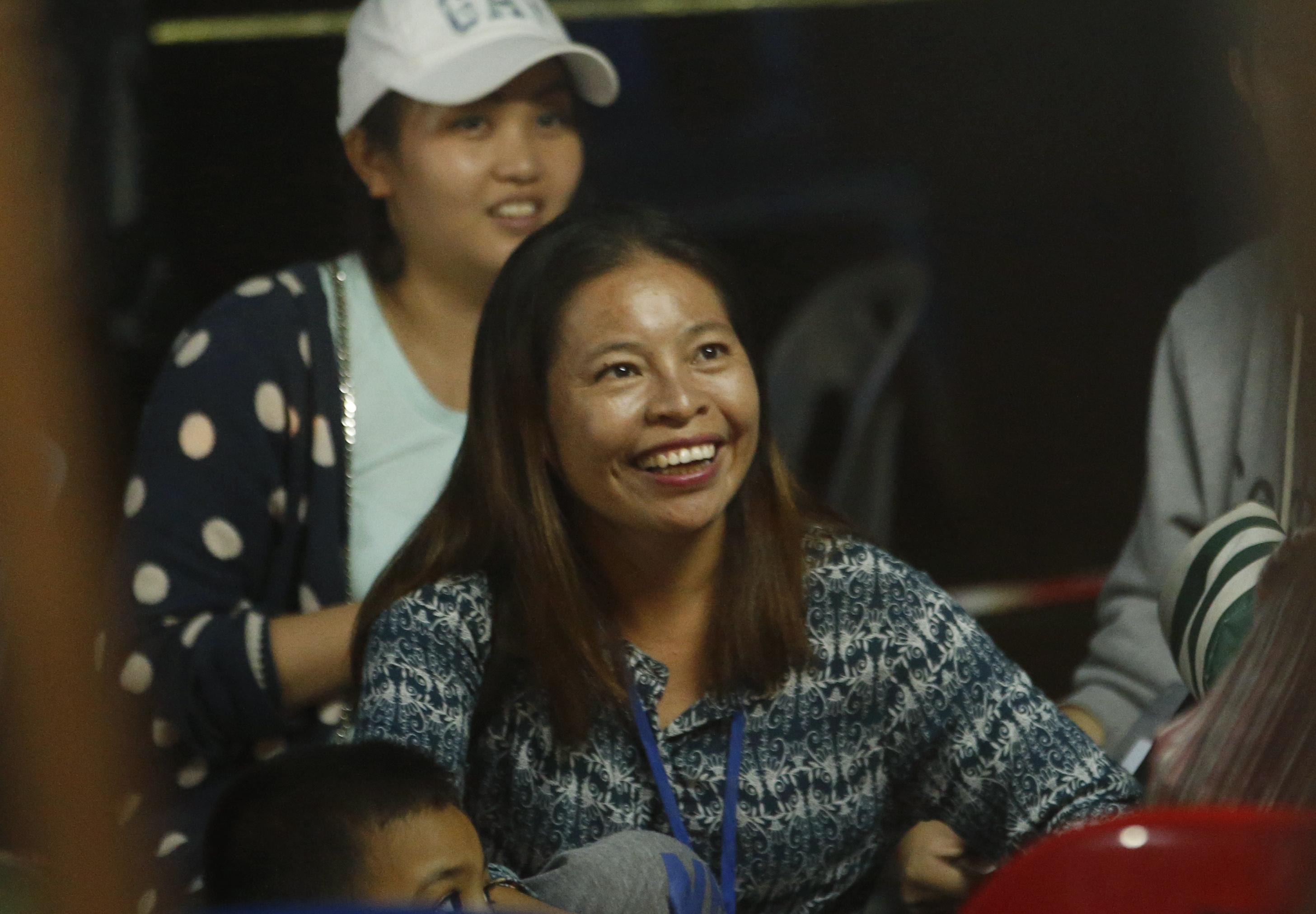 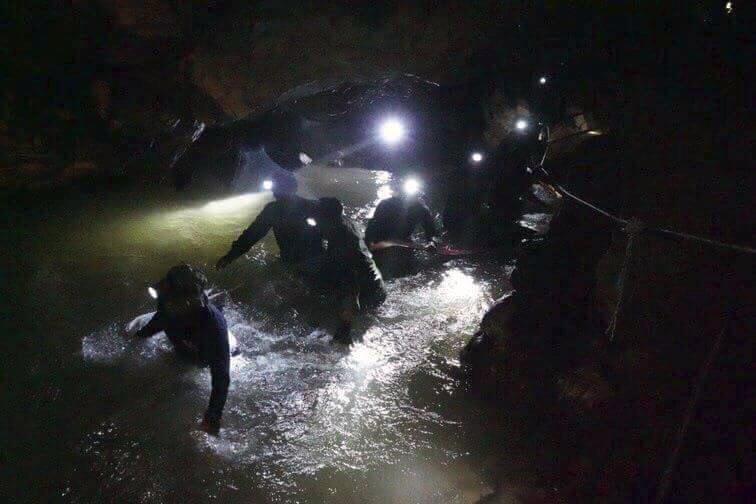 It remains unclear whether any of the group are injured or in need of medical attention.

Doctors and paramedics have been sent inside the cave where the boys had been enjoying a trip.

But it would take them about four hours to assess the group's health and crucially how fit they are before coming up with a strategy to fish them out.

Rescuers had discussed waiting until water levels subsided to get them out – but they don't know how long this would be and time is of the essence.

Other options included teaching the group to use diving gear to navigate the flooded cave. 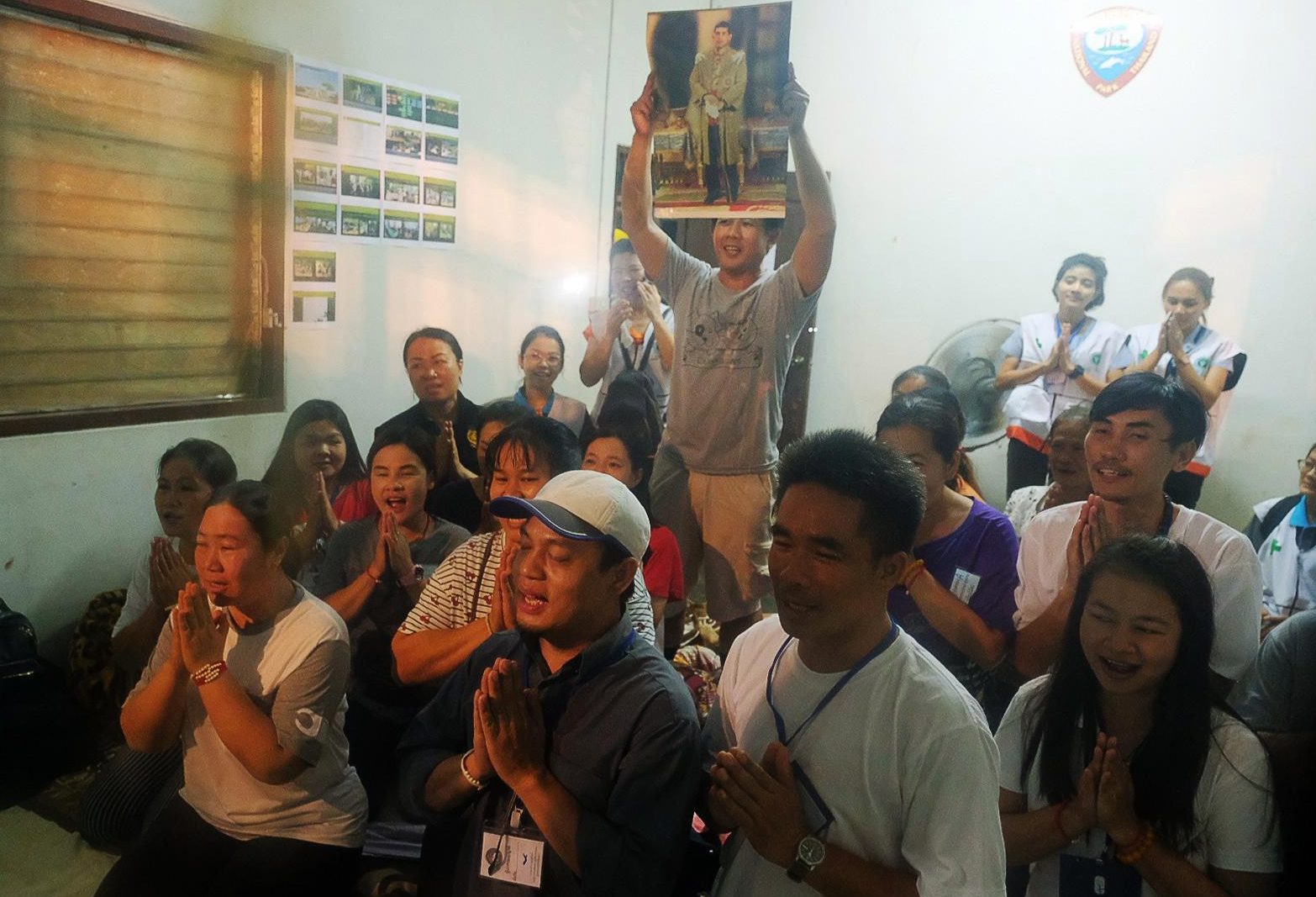 Prime Minister Prayuth Chan-ocha thanked the international experts and rescuers who helped locate the missing for their “tremendous efforts”.

A statement from his office read: "The Royal Thai Government and the Thai people are grateful for this support and co-operation, and we all wish the team a safe and speedy recovery." 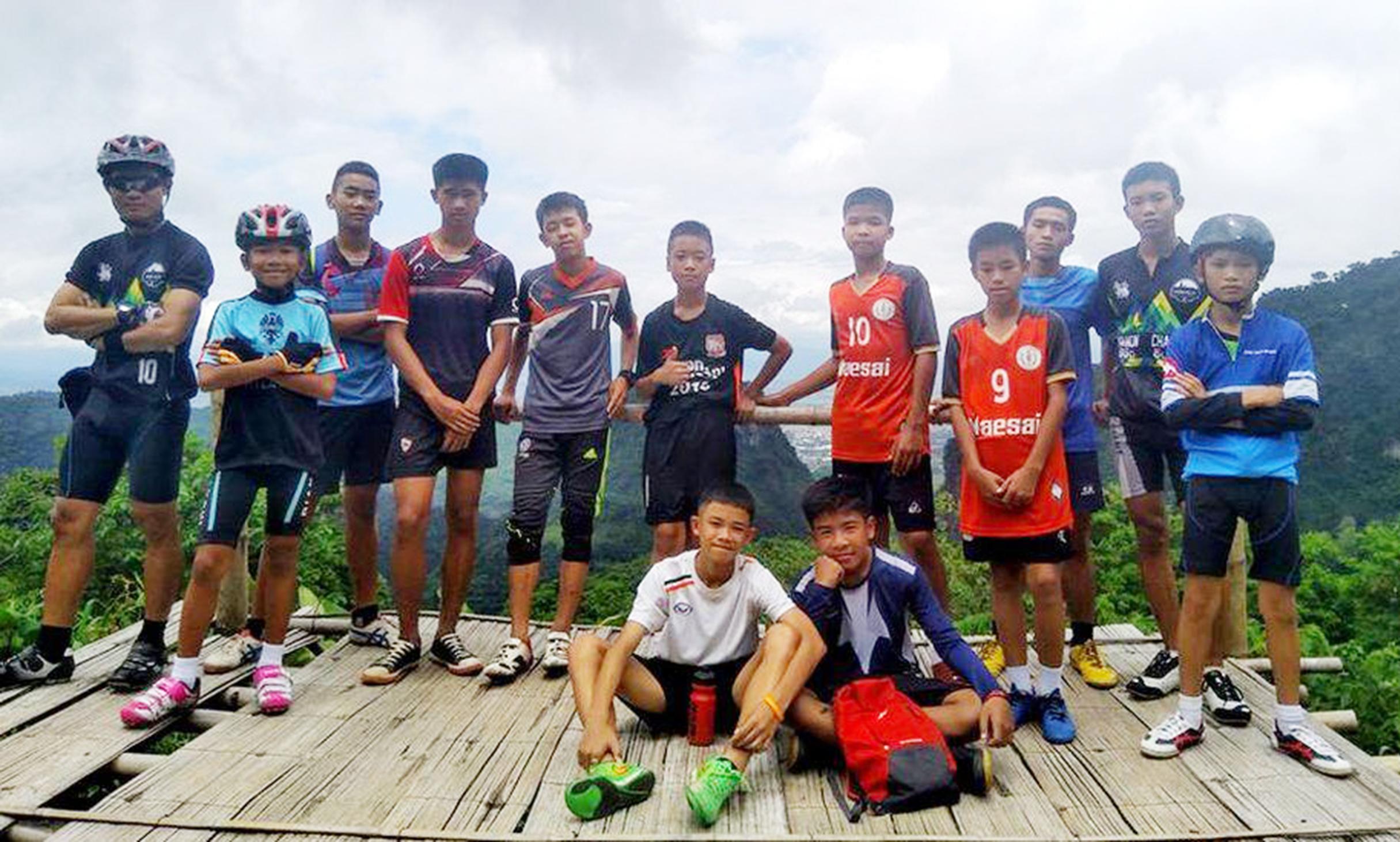 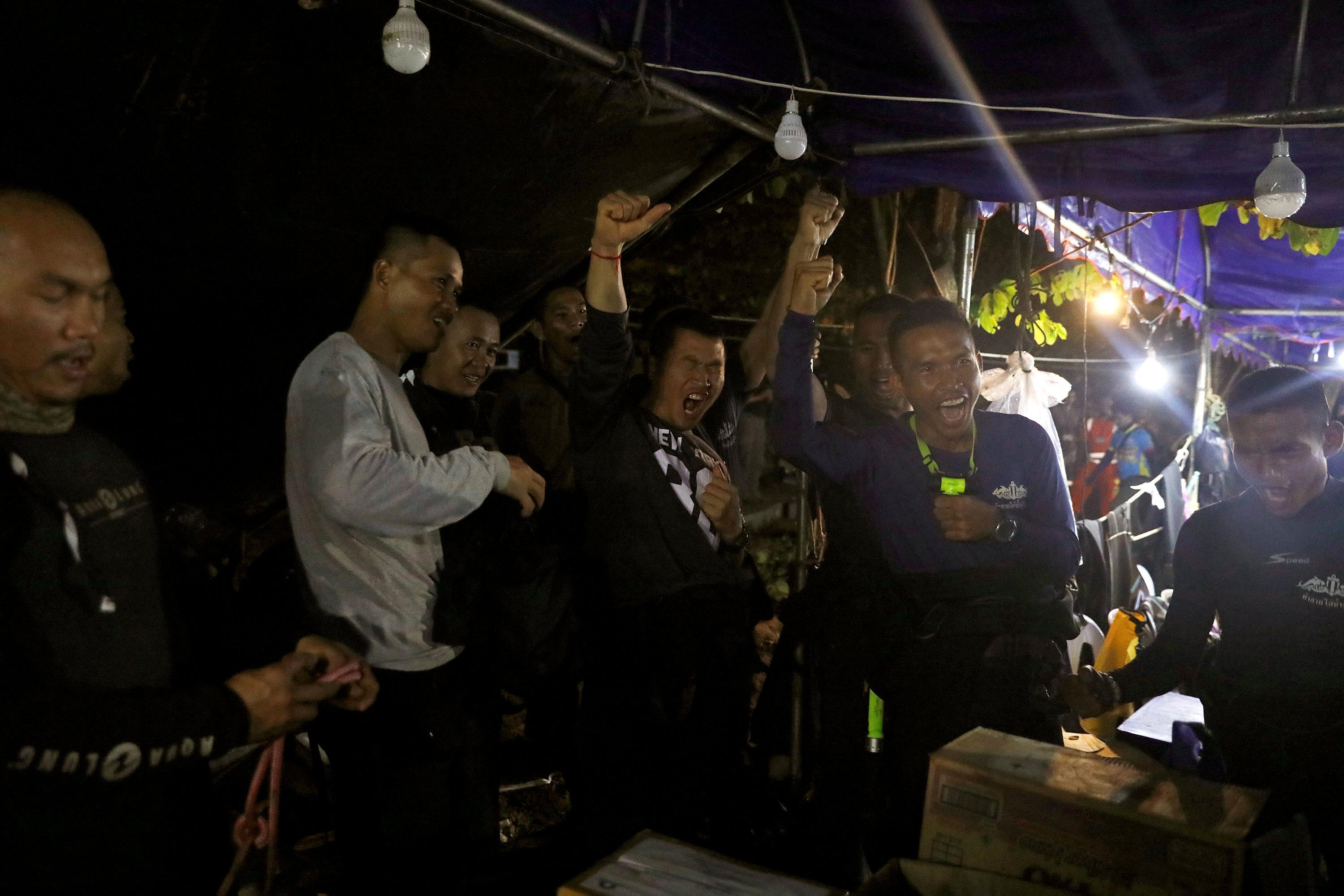 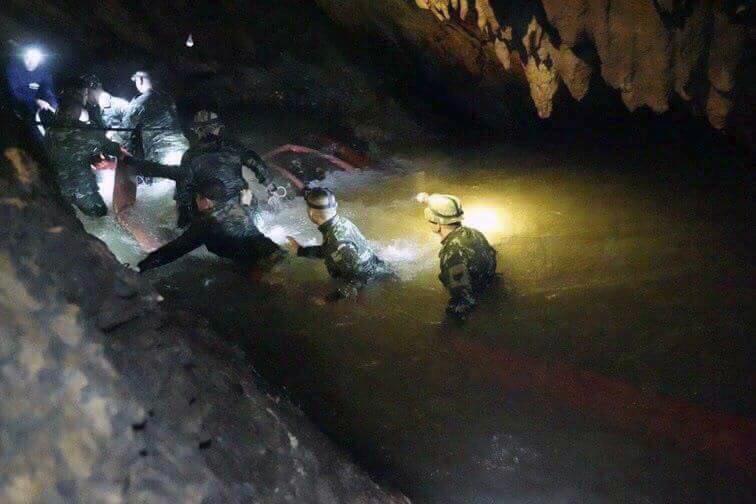 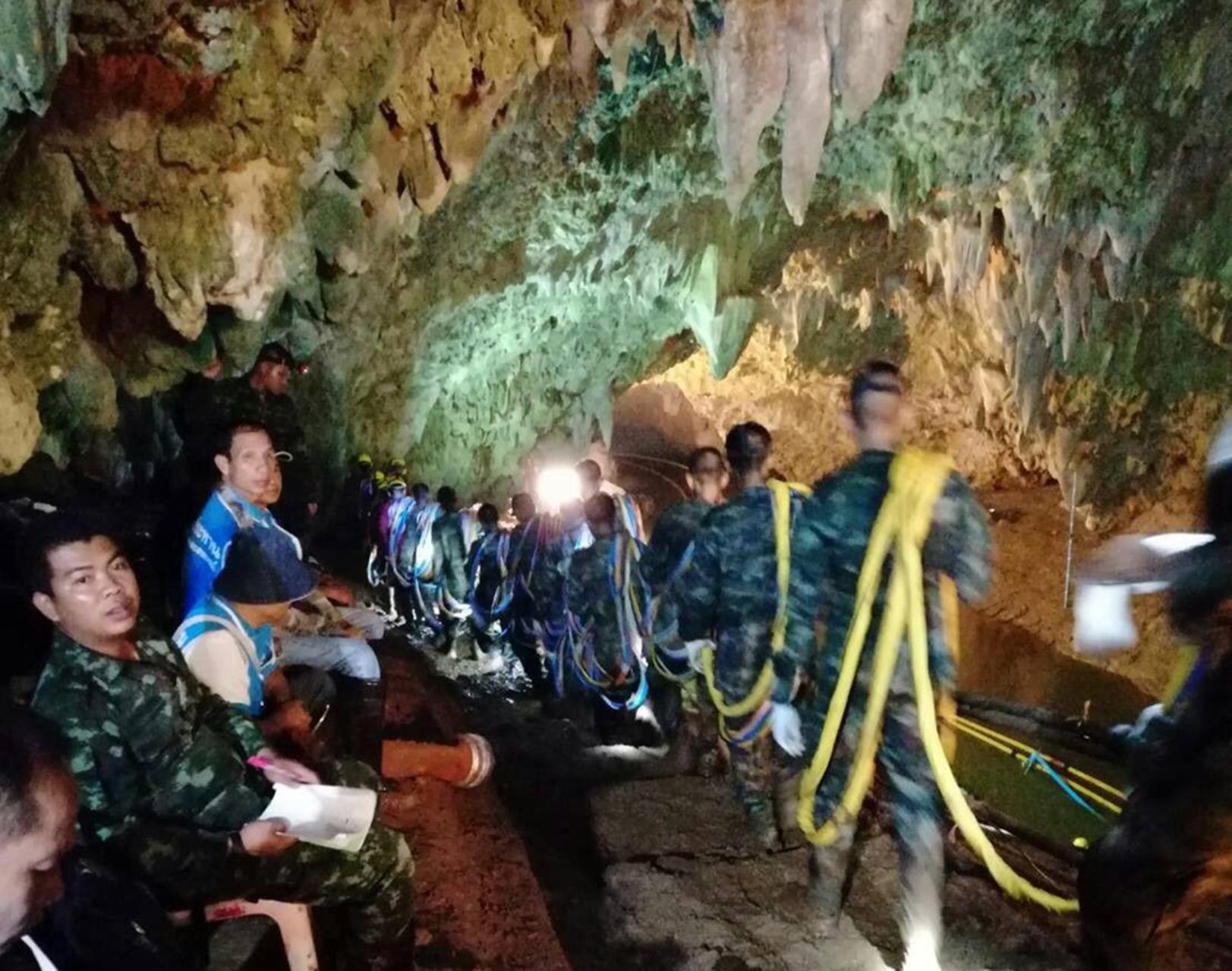 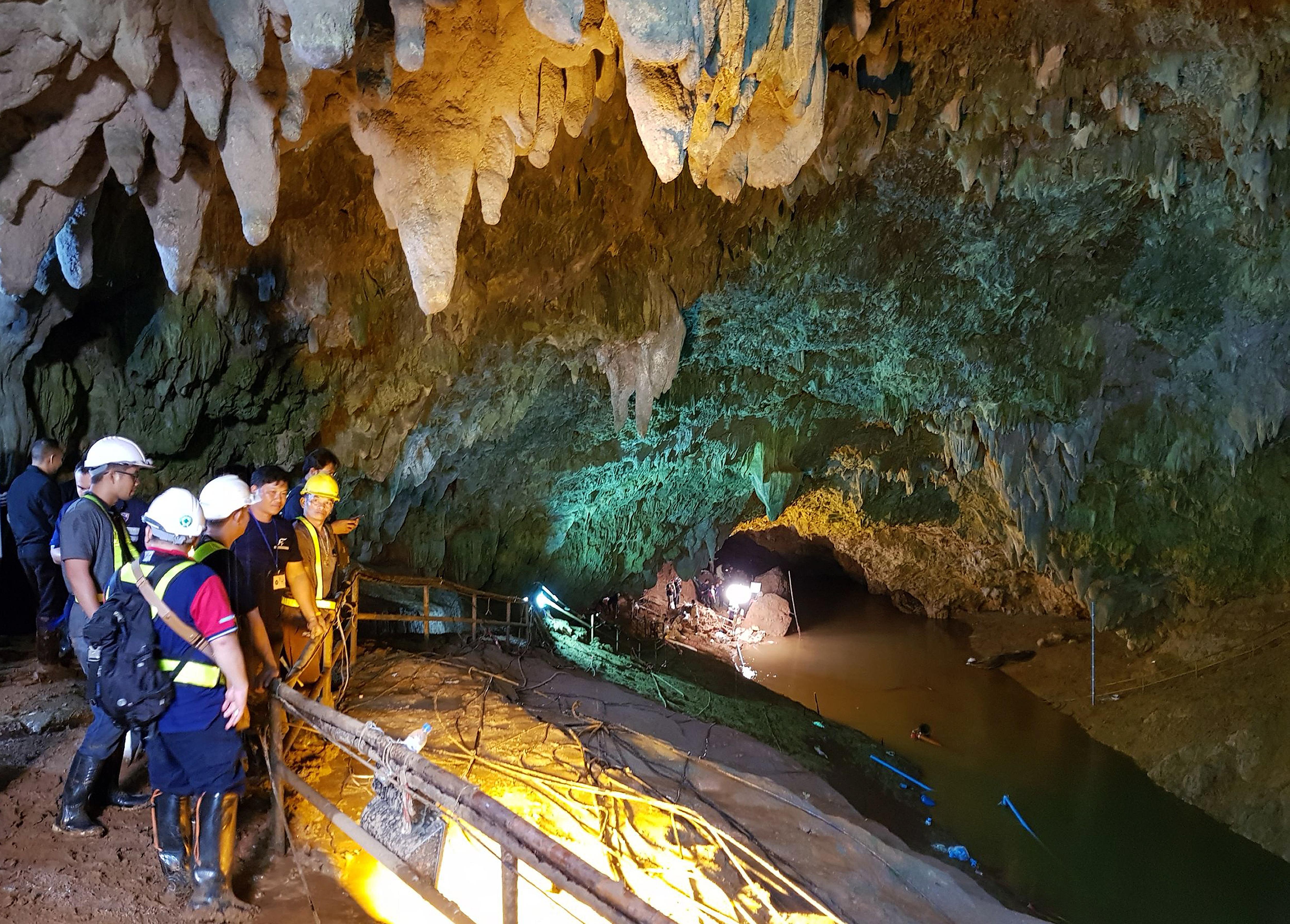 A leading American cave rescue expert says many challenges are ahead for rescue divers.

Anmar Mirza, the US National Cave Rescue Commission coordinator, says the primary decision is now one of whether to try to evacuate them or to supply them in place.

Mr Mirza said "Supplying them on site may face challenges depending on how difficult the dives are. "Trying to take non-divers through a cave is one of the most dangerous situations possible, even if the dives are relatively easy."

He added that "if the dives are difficult then supply will be difficult, but the risk of trying to dive them out is also exponentially greater". 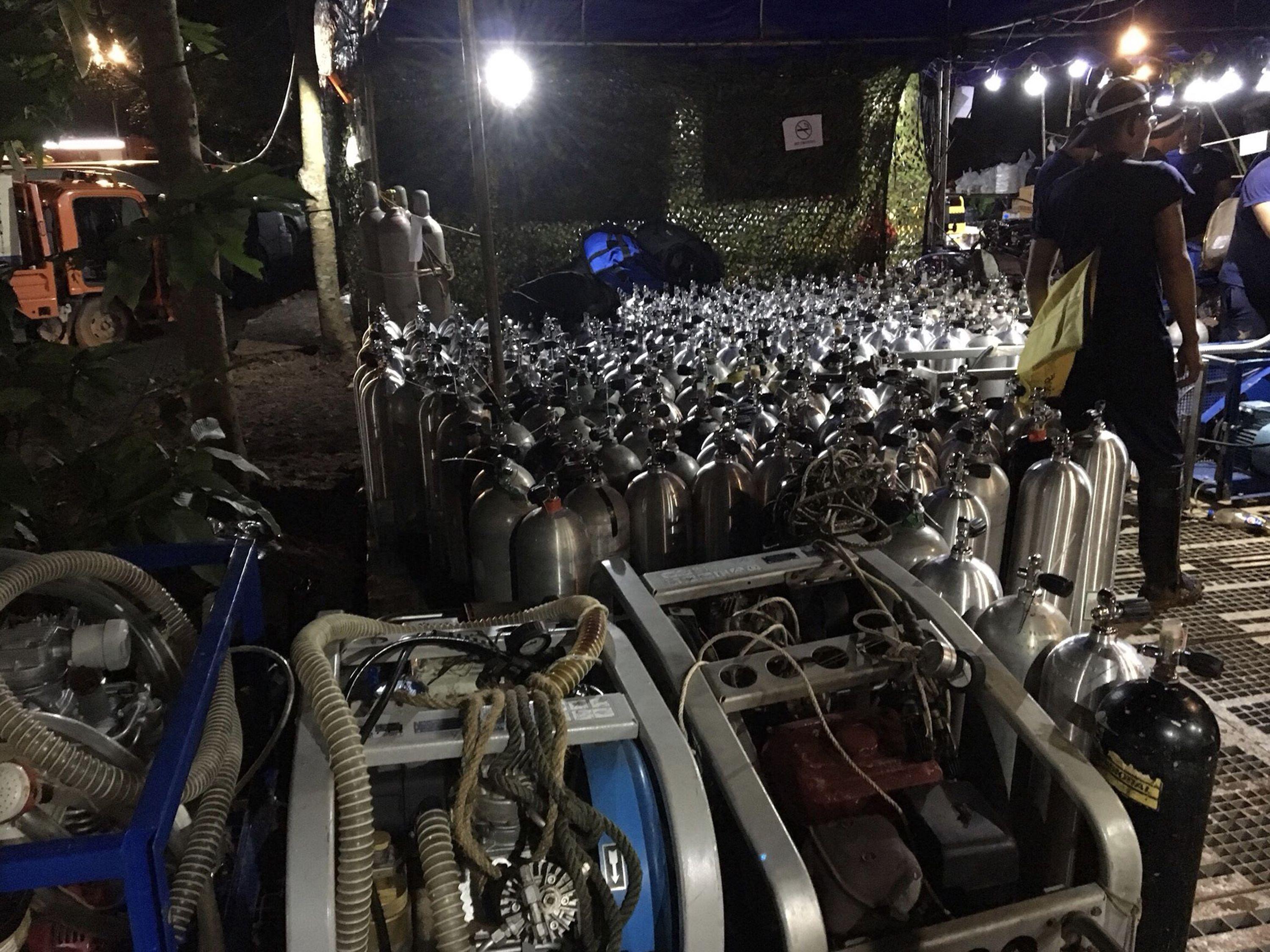 Initial progress had been made through the narrow passageway early today after rescuers passed through a key chamber which yesterday had been blocked by high, murky waters.

Experts in cave rescues from around the world, including Australian and the United Kingdom have been involved in the desperate search.

Divers have been stymied repeatedly by rising water that forced them to withdraw for safety reasons.

When water levels fell Sunday, the divers went forward with a more methodical approach, deploying a rope line and extra oxygen supplies along the way.

The SEALs' Facebook page said that since last night, the divers had reached a bend where the half-mile-long passage splits in two directions.