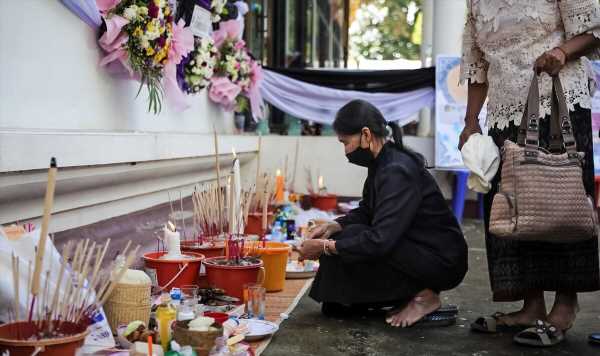 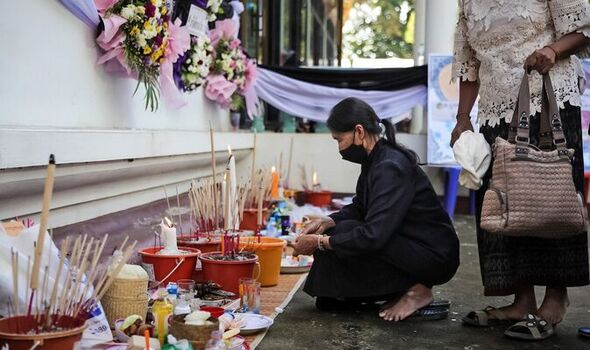 Families wept as they clutched their young ones’ toys, following the slaughter of 24 children and 13 adults by a drug-addled ex-policeman. Armed with a knife, semiautomatic pistol and a shotgun, Panya Khamrap launched his bloody rampage in the northern town of Uthai Sawan on Thursday.

Most of the children, aged about two to four, were stabbed to death as they took a nap at the preschool centre. The adults were shot.

Khamrap, 34, a former police sergeant sacked earlier this year for drug abuse, drove home and killed his wife and child, before turning a gun on himself.

Yesterday, Seksan Sriraj, 28, whose eight-months-pregnant wife was one of the first to die, said: “I cried until I had no more tears coming out of my eyes. They are running through my heart.” Holding a stuffed dog and a toy tractor, Suwimon Sudfanpitak, 40, whose nephew Techin, three, was murdered, said: “I saw two bodies in front of the school.

“I immediately knew that the kid was already dead.” Kritsana Sola, two, who loved dinosaurs and football, had been showing off his new haircut just before he died.

Khamrap went to the nursery after a court hearing and became agitated when his child was not there.

He returned with the weapons, shooting and kicking his way through the nursery’s locked glass front door.

After the massacre, Khamrap calmly strolled to his white pick-up truck and drove off, shooting at passers-by.

Nong Am, three, who was sleeping under a blanket, survived as Khamrap killed her classmates.

Her uncle, Wutthichai Baothong, said: “It is a miracle from God that saved her.”