A popular tourist hot-spot made famous by The Beach movie has made an ‘unimaginable’ recovery after being closed just six months ago.

Thailand’s picturesque Maya Bay was shut to visitors because crowds of beach-goers were destroying its coral ecosystem.

But just six months later conservationists have hailed the ‘beyond imagination’ recovery the delicate beach has made.

Thai conservationists have welcomed new video footage of reef sharks gliding through the azure waters of Maya Bay as a ‘positive sign’ of recovery.

The bay, circled by dramatic limestone cliffs on Ko Phi Phi Ley island in the Andaman Sea, was made famous by the Danny Boyle film starring Leonardo DiCaprio. 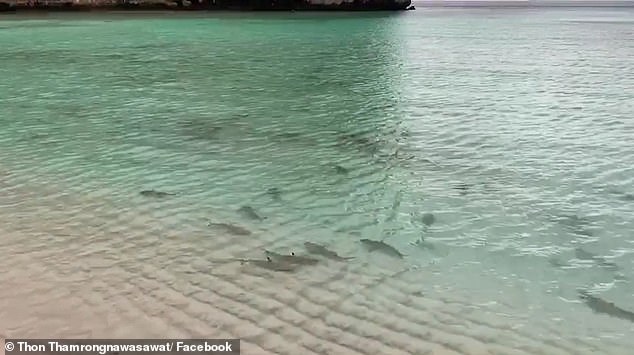 National Park, Wildlife and Plant Conservation Department officials shared a video of dozens of blacktip reef sharks swimming close to the beach six months after it was closed to the public 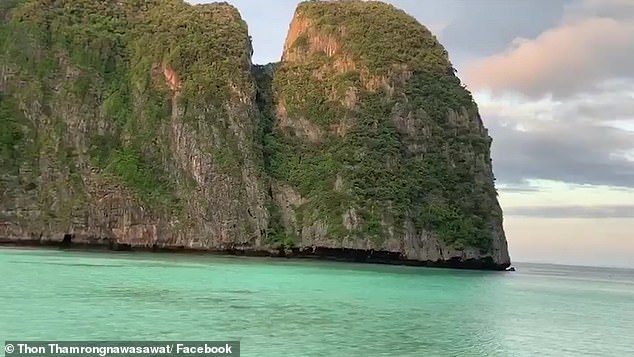 But the movie, which was released in 2000, prompted hordes of tourists to sweep in on a daily of flotilla of motor boats, damaging the coral ecosystem and eroding the once pristine white sand beach.

Authorities shut the park temporarily to the public in June but later extended the closure indefinitely to let the bay recover.

On Friday park officials shared video of dozens of blacktip reef sharks serenely swimming close to the beach – images unimaginable just weeks ago as tourists jostled for selfies on the white sand.

The National Park, Wildlife and Plant Conservation Department, said in a Facebook post: ‘Come and count sharks! It’s a good sign that Maya Bay has changed and that change is positive.’

A Thai marine biologist prominent in the campaign to close Maya Bay hailed the shark video as ‘beyond imagination, unbelievable’. 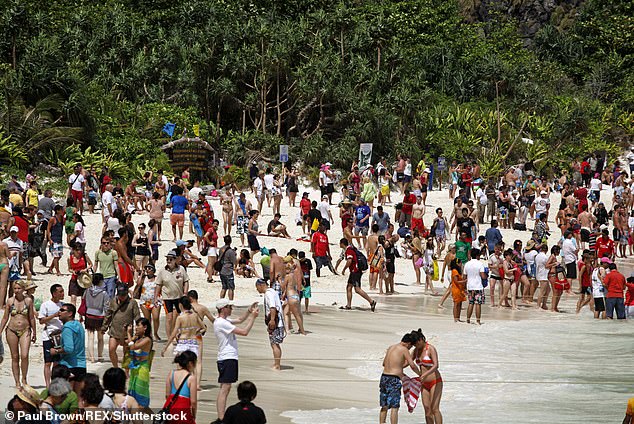 Crowds of tourists flocked to Maya Bay where The Beach was filmed, damaging the delicate ecosystem and eroding the shoreline 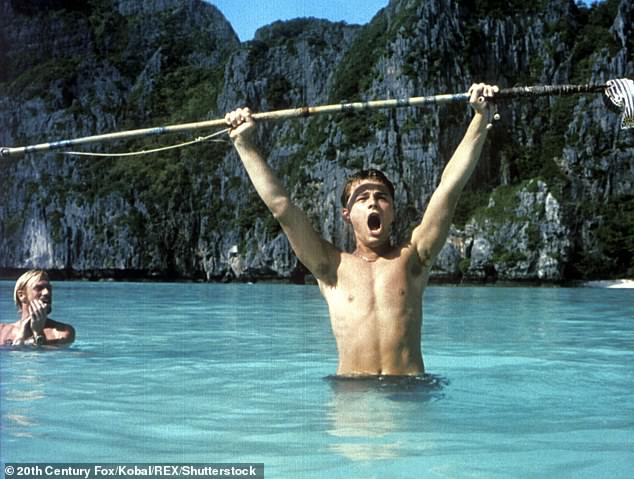 After Leonardo Dicaprio starred in the The Beach in 2000, tourists flooded the picturesque bay looking for their own adventure

Thon Thamrongnawasawat said on Faceboook: ‘How do I feel? Tearful. At the beginning I never thought (the rehabilitation) would be as good as this in only six months.’

Despite the remarkable recovery Thai authorities have not said if, or when, the bay will open.

A National Park, Wildlife and Plant Conservation Department official said: ‘The reef will take a longer time to recover.’

Many Thai marine national parks were closed from mid-May to mid-October, but because of tourist demand Maya Bay stayed open all year round.

Thailand’s idyllic beaches are under increasing strain from huge numbers of tourists and accompanying development in remote and fragile ecosystems.

Many flock to the town of Krabi where boat trips carried visitors to nearby islands replete with opportunities for snorkelling and selfies – among them Maya Bay.

Koh Yoong, part of the Phi Phi island chain, and Koh Tachai, in the Similan Islands national park, have been off limits to tourists permanently since mid-2016.