San Francisco: On a recent afternoon, thousands of noncombatants watched from the sidelines as their general ordered his troops across the battlefield and became locked in a fierce duel with the enemy.

At one point, he berated himself for a tactical misstep that could have cost his side the high-stakes conflict. Then he smiled and began outmanoeuvering his foe.

"I can't lose," Hikaru Nakamura, 32, said to the exultant onlookers. Victory seemed close as members of the opposing army were vanquished one by one. "I win again — there you go, guys. Wow." 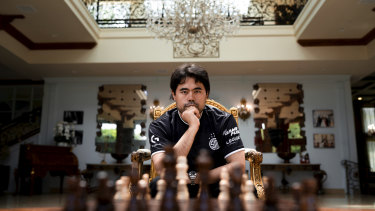 Nearly all of Chess grandmaster Hikaru Nakamura’s 528,000 followers on Twitch have come aboard since the pandemic began. Credit:New York Times

Nakamura gave himself just a moment's respite, then plunged into another fray. Pawns, knights, bishops and even kings fell before him as the chess grandmaster demolished a slate of online challengers, all while narrating the tide of the battle to tens of thousands of fans watching him stream live on Twitch, the Amazon-owned site where people usually broadcast themselves playing video games like Fortnite and Call of Duty.

The coronavirus pandemic and stay-at-home orders have crowned a host of unlikely winners catering to bored audiences. But watching livestreams of chess games? Could one of the world's oldest and most cerebral games really rebrand itself as a lively enough pastime to capture the interest of the masses on Twitch?

Turns out, it already has. 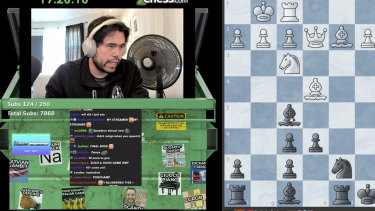 Since the pandemic began, viewership of live chess games has soared. From March through August, people watched 41.2 million hours of chess on Twitch, four times as many hours as in the previous six months, according to analytics website SullyGnome.

In June, an amateur chess tournament called PogChamps was briefly the top-viewed stream on Twitch, with 63,000 people watching at once, SullyGnome said. And popular Twitch gamers like Félix Lengyel (better known to his 3.3 million followers as "xQcOW") have also recently started streaming chess.

That collision of the chess audience and the general gamer audience has created a "giant chess bonfire," said Marcus Graham, Twitch's head of creator development.

The popularity of online chess has partly been fuelled by Nakamura. Last month, one of the world's top professional video game teams, Team SoloMid, beat several esports rivals to sign him to a six-figure contract so it could pair him with advertisers and merchandise.

Nakamura was one of the first chess players to join an esports team, just a week after a different group signed a Canadian player, Qiyu Zhou.

Though Nakamura began streaming chess consistently on his Twitch channel, GMHikaru, in 2018, nearly all of his 528,000 followers have come aboard since the pandemic began. And as his popularity has skyrocketed, media attention has increased — including a cameo as himself on the television drama Billions in May.

"It's just amazing to see the level of support and the love that I've seen from the Twitch community," Nakamura said. He added that the most appealing part of playing and streaming chess was simply "the fact that I'm so good at it." 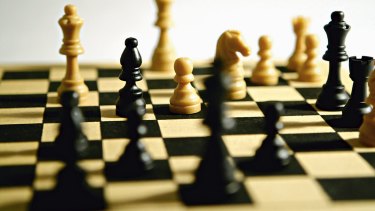 The ancient game of chess is getting a second look by many people in a time of lockdown.Credit:Anthony Johnson

It helps that he has an unimpeachable chess pedigree. In 1998, at age 10, he became the youngest player in the United States to be named a master, a title earned through strong performances.

Five years later, he became the youngest US player to graduate to grandmaster, the highest title. He has since won five national championships.

On his Twitch channel, Nakamura, who lives in Los Angeles, rarely stops talking. His stream of commentary and chatter, even as he directs his pieces with the precision of an orchestra conductor, is one of the main reasons fans have flocked to him.

"He draws people because he's so good, but also, there are other top players on Twitch that are not as engaging as he is, not as funny, not as in tune with the sort of Twitch culture," said Brandon Benton, 34, a postdoctoral physics researcher at Cornell University who watches Nakamura stream. He's a "down-to-earth memer and jokester."

If you're picturing a chess match as a drawn-out slog — well, you're not wrong. A classical game without time limits can last five hours. But many online battles, including nearly all the games that Nakamura streams, are blitz chess.

Each player has just a few minutes to complete all of his or her moves, leading to an aggressive, risky style of play that fans say is exhilarating to watch.

A player's timer stops only when it is the other person's turn to move a piece, so planning ahead and making quick calls is vital to managing the clock. The climax often comes when mere seconds remain and the combatants exchange a rapid flurry of moves.

In a recent stream, Nakamura had fewer pieces left than his opponent and just 20 seconds remaining. But 41 moves later, he was grinning after pulling off an improbable checkmate that involved charging a pawn across the board and hatching it into a queen. It had taken him just 16 seconds.

"More than anything, it's the ability to play extremely high-level chess and win while I seemingly am not focused on the game and talking to my chat," Nakamura said of his ability to draw a large audience, which he usually retains as he plays 20 or more games in one sitting. "At least at blitz chess, I'm probably the best or second-best player ever, in the entire history, at least online."

If Nakamura is as good as he says — and he is, judging from his numerous titles, various international awards and 288 victories in 302 streamed matches — then it makes sense that chess fans are tuning in. If Serena Williams and Usain Bolt showed off their unique abilities every day on a livestream, wouldn't you watch?

Still, chess, to put it kindly, is not quite as visually stimulating as a tennis match or a 100-meter dash. So what else is part of the secret?

Many devotees at "Naka's PogUniversity"— the name of Nakamura's community on Discord, a voice and text chat application — said they had been sucked in after rediscovering chess in the past few months while stuck inside. Many had dabbled in the game as children.

"When I was growing up, high-level chess was secreted behind closed doors, played by the privileged, moneyed people in society," said Clayton Chan, 43, from Tustin, California.

"Realising that I could see chess being played at the highest levels and seeing the players on Twitch communicate their thoughts with the community really resonated with me."

Noah Olsen, 24, who lives in Washington, DC, said he enjoyed how interactive Nakamura was with his fans. The grandmaster sometimes invites his subscribers to play against him on the stream, and he will start with fewer pieces as a handicap or play blindfolded.

"It's definitely a lot of fun to know you're going up against a chess mind the calibre of Hikaru," Olsen said. "But the 10,000 people watching while he dismantles you is a little nerve-racking."

In Murcia, Spain, Anthony Nicolaou, 16, recently discovered Nakamura's channel. That inspired him to rededicate himself to a longtime goal: to beat his father at chess.

"The most important thing I learned from him is that it's OK to be bad," he said of watching Nakamura. "I realised you can still learn and improve without feeling like an idiot."

Nakamura has become a coach for streamers, too. He ranges from supportive to exasperated with the shortcomings of his protégés. Fans love when he loses his mind at a poorly thought-out move.

"He makes all sorts of faces," Benton of Cornell said.