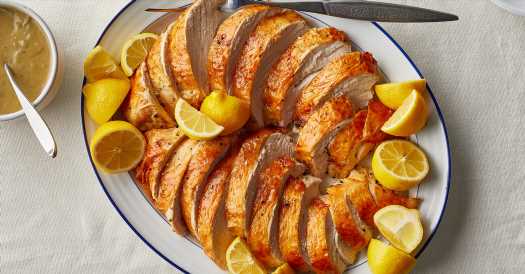 Need a little assistance? Eric Kim has seven recipes and an invaluable guide to get you through the meal. 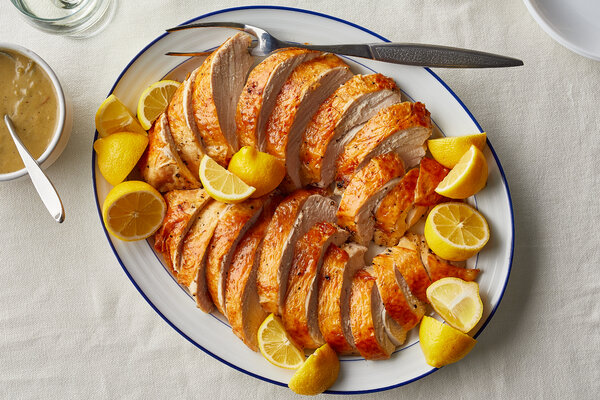 Good morning. The Thanksgiving sharpies may be breathing easy — their plans for next week locked down and ingredients secured, pies and stock in the freezer, wines lined up on the windowsill — but I’m thinking today about those unused to cooking the feast.

It’s intimidating, after all, to cook Thanksgiving, and especially to do so for the first time, for the second time, for a new family, under different circumstances. It’s all new: this bird the size of a toddler, the multiple side dishes, the need for dessert. What comes first and what comes second? How do you manage to make all that food and serve it so that at least some of it’s hot at the same time? Yikes!

Eric Kim comes to the rescue in The Times this week with his smart look at a beginner’s Thanksgiving, along with seven recipes that will ensure success: a salt-and-pepper roast turkey breast (above) with make-ahead umami gravy and lemony cranberry relish, alongside cheesy pizza stuffing; mashed sweet potatoes with roasted garlic; a green bean, artichoke and radicchio salad; and a caramel apple pudding for dessert. For first-time Thanksgiving cooks, or really anyone looking to simplify their time in the kitchen this year, it’s an invaluable guide.

Many people, of course, don’t fall into either camp. They’re neither Thanksgiving newbies nor seasoned professionals. They’re simply trying to make the holiday meal the best that it can be. If that’s you or someone you’d like to be, here’s Genevieve Ko’s examination of a better way to make mashed potatoes, with a recipe to match.

There’s much to be thankful for in Reem Kassis’s look into the joys of the Arab American Thanksgiving table and, in particular, at hashweh, a rice-based stuffing fragrant with cinnamon, nutmeg and allspice that is often the centerpiece of celebratory meals. (While you’re browsing for rice dishes, take a look at this fine vegetable biryani that is sometimes part of Desi Thanksgiving tables as well.)

Maybe you’ll thrill to Yewande Komolafe’s new recipe for sweet potato biscuits, or to Samantha Seneviratne’s cranberry crumb muffins, which like so many of our Thanksgiving breads you could absolutely make ahead and freeze.

And, for inspiration regardless of your level of skill in the kitchen, here’s Melissa Clark’s instructions for a one-pan, one-pot Thanksgiving dinner, which you can watch her make on our YouTube channel.

There are thousands and thousands more recipes for Thanksgiving and for cooking right now waiting for you on New York Times Cooking. (I’d like this roasted fish with ginger, scallions and soy for dinner tonight.) Not to put too fine a point on it, but you do need a subscription to access them. Subscriptions support our work. I hope, if you haven’t already, that you will subscribe today. Thank you!

We’ll be standing by to render assistance, should anything go sideways while you’re cooking or using our technology. Just drop us a line: [email protected] Someone will get back to you. And I’m at [email protected] if you’d like to vent or say something nice. I read every letter sent.

Now, it’s nothing to do with sage leaves or summer sausage, but I’ve been driving around listening to the audiobook version of “The Eighth Sister,” by Robert Dugoni, narrated by Edoardo Ballerini. And if I can’t quite rave the novel, I’ll say this about Ballerini: I’d listen to that guy read minutes from a meeting of the town council. He’s aces high.

Here’s Michael Schulman’s interview with Lin-Manuel Miranda, in The New Yorker, a must read for theater nerds.

Please take a look at the best illustrated children’s books of 2021, a list The Times has selected each year since 1952 and, since 2017, with the assistance of the New York Public Library.

Finally, new old music to play us off: Taylor Swift with Phoebe Bridgers, “Nothing New (Taylor’s Version.)” Enjoy that, and I’ll be back on Friday.