Moscow: Russian state television hailed it as "one of the most advanced robots," showing a tall, white android dancing clumsily to a catchy tune. It seemed so human. 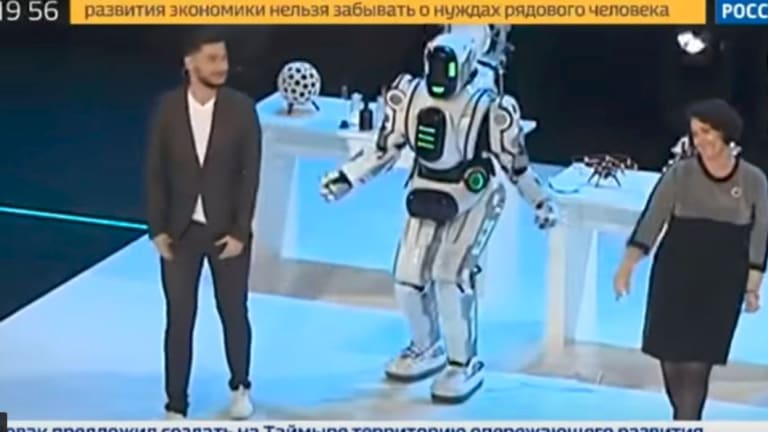 The dancing robot on Russian television.

There was a good reason: It was just a man in a robot costume.

In the television report, the robot, called Boris, spoke slowly with a very synthetic voice.

"I know mathematics well, but I also want to know how to draw and write music!" Boris said in a report broadcast Tuesday by state-owned Rossiya-24 news channel. His eyes flashed mysteriously.

Boris danced in front of a crowd of children, who had gathered at a youth forum designed to help them choose their future professions.

"It is quite possible one of them could dedicate their lives to robotics," journalist Arseny Kondratiev said in his report. "At the forum, they had the opportunity to see one of the most advanced robots."

Some inquisitive Russian bloggers were not convinced, though, wondering how the country's scientists could produce such an impressive android without showing any earlier results.

"Why doesn't he have a single sensor?" one asked. "Why is there nothing about robot Boris online?"

He added: "Why does it look like as though he was made to fit a human being inside?"

Pictures from the forum later revealed that Boris also had what looked like a human neckline between his head and his body.

Finally, a representative of a costume company recognised its "Alyosha the Robot" product in Boris.

"The design and technical equipment of the costume create a near-total illusion that a real robot is standing in front of you," according to a description of the costume on the company's website. "That's why everybody wants to take a selfie with him."

The plastic costume, equipped with voice converter, is available for purchase for 250,000 rubles, or about $5200.

A raft of articles in Russian and international media mocked the Rossiya-24 report as another instance of fake news. The channel attempted to push back, claiming that the original report did not imply that Boris was actually a robot.

"This was just not the best choice of words," said Yevgeny Nipod, a Rossiya-24 journalist.

Nipod's report featured several children, who said they realised from the beginning that the robot was actually a human.

"This was not a robot, and we realised well that this was a game," Irina Potekhina, the Russian education minister, said in the report. "This was a little spectacle."