As a nine-year-old schoolgirl, she laid flowers on the grave of a British soldier she had never met.

Willemien Rieken was paying tribute to Trooper William Edmond for making the ultimate sacrifice during the fight for freedom from Nazi oppression.

And in a poignant act of remembrance undimmed by the passage of time, Mrs Rieken, now 84, still makes an annual visit to tend the final resting place of Trooper Edmond in her Dutch village.

This year will mark the 75th anniversary since he was shot through the back by a German sniper on the first day of Operation Market Garden after landing by glider behind enemy lines in German-occupied Holland. 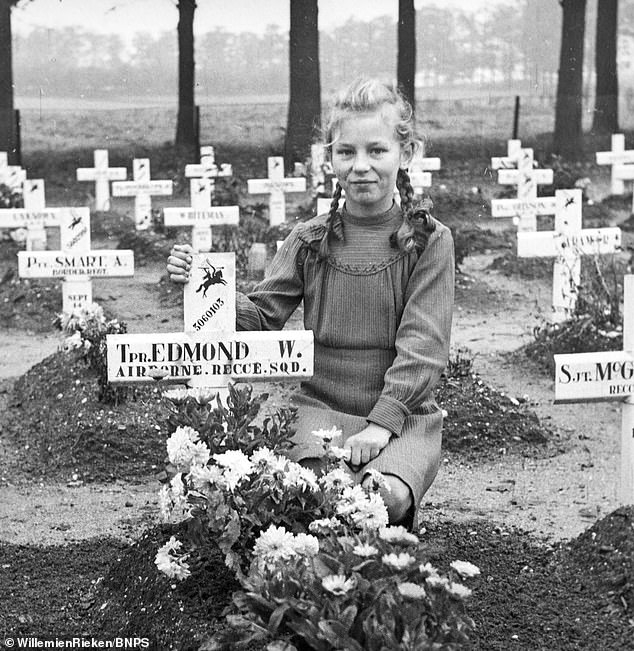 When he died aged 27, his last reported words to two comrades who came to his aid were: ‘Tell my wife I love her and go and see her.’

He was buried in the war cemetery in the Dutch village of Oosterbeek, three miles west of Arnhem, where Mrs Rieken lived with her parents and sister.

Operation Market Garden saw more than 35,000 British, Polish and American parachute and glider troops dropped into the Netherlands in order to secure key bridges across the River Rhine in a daring, but ultimately doomed, bid to win the Second World War by Christmas 1944. 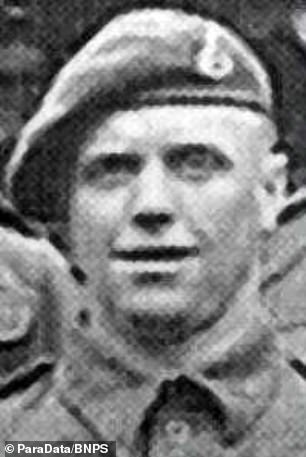 Mrs Rieken has never forgotten how she was forced to hide in a small cellar underneath her father’s confectionery shop for five days while fierce fighting took place around their house and garden.

Eventually, a German soldier ripped open the cellar door, ordered them out and interrogated them at gunpoint because he suspected they may have been concealing Allied soldiers.

They were set free, but the experience left a lasting impression on Mrs Rieken – as did the later grim discovery by her family of four British bodies in their garden.

After the war, locals arranged a ceremony where schoolchildren laid flowers at the graves of British soldiers killed in the battle. The young Willemien was among them and, in our black and white photograph from the time, can be seen kneeling by Trooper Edmond’s grave with her hair in pigtails.

Now she is a grey-haired grandmother, but she still visits his grave once a year in early September in the lead up to the anniversary of the Battle of Arnhem.

It is in Oosterbeek War Cemetery, where a total of 1,684 Commonwealth servicemen from the Second World War are buried or commemorated.

Divorcee Mrs Rieken, a retired secretary, said: ‘I remember seeing the paratroopers coming down when I was playing with the other children.

‘Then they went past on the main road in Jeeps towards the bridge in Arnhem. But, a few hours later, my parents told my sister and I to go inside. We could hear all the fighting in the garden – there was shooting and bombs going off. I remember clutching my father’s hand very tight.

‘These men made such a big sacrifice for us to help us get our freedom. That is why I lay flowers every year at the grave of William Edmond. I will never forget what they did for us.’ 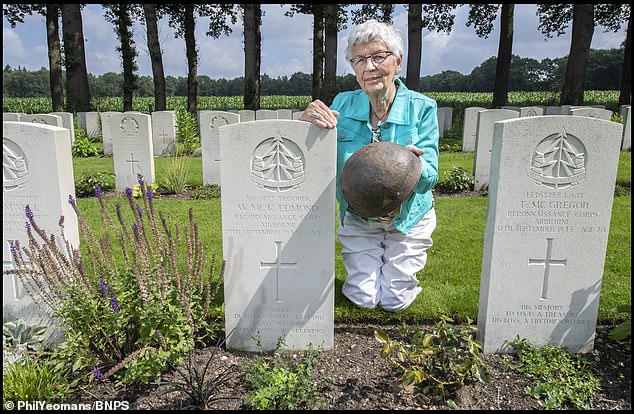 75 years on, Willemien still makes the pilgrimage to Edmund’s grave to give thanks for his brave efforts in liberating her village from Nazi oppression

The aim of Operation Market Garden was to thrust north from Eindhoven to Arnhem and on into Germany. Although British paratroopers reached the bridge at Arnhem and seized one end of it, they were heavily outnumbered by the enemy, in particular an SS Panzer Tank Division they did not expect to be there. What ensued was a remarkable, costly rearguard action immortalised in the 1977 film A Bridge Too Far, starring Dirk Bogarde and Michael Caine.

Since Mrs Rieken’s touching tradition of visiting the cemetery every year began, the original crosses marking the graves have been replaced with headstones. A rusty helmet bearing Trooper Edmond’s name has also recently been unearthed by local historians and is now held at a museum in Arnhem.

Trooper Edmond, from Musselburgh, near Edinburgh, served in the 1st Airborne Reconnaissance Squadron. He died on September 17, 1944. His wife was called Janet and his parents William and Joanna.

Since Mrs Rieken’s attempts to trace Trooper Edmond’s descendants have been unsuccessful, she believes it is unlikely any of his relatives are aware of her visits to his final resting place.