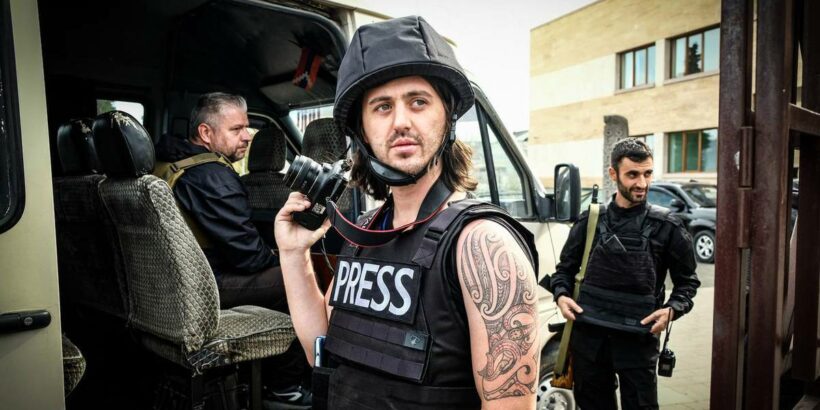 Welcome to our new daily podcast, The Front Page, where senior journalist Damien Venuto goes behind the headlines to grill newsmakers and journalists on the big stories of the day. The Front Page will be released at 5am every weekday morning – offering you insights and context on the major issues and topics of interest. You can listen to The Front Page above, and find it on iHeartRadio, or wherever you get your podcasts.

Tom Mutch has stopped paying attention to the sirens that go off almost every hour in Kharkiv.

On today’s episode of the Front Page podcast, the Ukraine-based war journalist tells the Herald that basing your movements on the sirens would make it impossible to just go about a normal day.

“No one really pays attention to the sirens,” he says.

“I mean, you know, if you hear artillery hit next to you, then yes, people start to take cover. But look, the sirens go about every hour or so. And if you went underground every time sirens went off, you wouldn’t have any kind of a normal life. To be honest, people are just trying their best to live a normal life.”

Mutch recently made the journey from the port city of Odesa to Kharkiv, and what he saw upon his arrival has left an indelible mark.

“The city has been absolutely wasted,” he says.

“There are just destroyed buildings after destroyed buildings. And these are not military compounds. These are schools, hospitals, universities, the council building, just everything. It just goes on and on. It’s just endless rubble.”

What he has witnessed stands in contrast to the Russian narrative, being broadcast through propaganda channels, presenting the invasion as a special military operation to aid the Ukrainian people.

Mutch says the Ukrainians are well aware of what the Russians have been saying and are furious at what they’ve been hearing.

“They hate the Russian narrative, they absolutely despise it,” the journalist says.

“I’ll give you one example. I was outside an apartment block that had just been hit by a missile yesterday. I was talking to a couple in their fifties, who were literally digging their belongings out of the rubble where their apartment had been.

Central to Putin’s recent messaging has been the idea that Ukraine has a Nazi problem, but Mutch says that this is nothing more than propaganda.

“When the far-right parties in Ukraine ran in the last election, they got less than 2 per cent of the vote,” says Mutch.

“The Ukrainian President is also Jewish. So the idea that Ukraine is somehow Nazified is a joke. It’s complete Russian propaganda. And Russia just wants to say that as an excuse to be able to invade Ukraine.”

The reality of the situation on the ground in Ukraine has led many in New Zealand to call on the Government to do more to help.

Yesterday, Prime Minister Ardern announced that the Government would give $5 million of funding and surplus stock of used helmets and body armour after a request of assistance from Ukraine Prime Minister Denys Shmyhal in a phone call with him on the weekend.

The funding would be used for fuel, military rations, communications and military first aid kits.

Asked whether he thought New Zealand could do more to help the military efforts, Mutch said it was difficult to see what more Ardern’s Government could do.

“I have to be honest,” Mutch said, “New Zealand is in the South Pacific, a million miles away from this conflict.

“I think that New Zealand has given moral leadership and has done what it can, but I honestly don’t see how New Zealand can really influence a conflict that is thousands of miles away.”

Despite the reluctance from the West to get involved in the conflict, Mutch says that the Ukrainian spirit has not been broken by the Russian onslaught.

“When I was there in the first couple of days in Kyiv, people were saying, we expect the city could fall within 72 hours.

“It’s now been more than three weeks and they still haven’t taken the outskirt towns.

“I remember talking to people in the first days of the war and they said: ‘We hope we will win, we will do our best to fight.’

“Now, three weeks in, after the Ukrainians have won a lot of military victories, people are looking me in the eye and they’re saying strongly: ‘We will win this war.’

“I’ve never seen a nation so united about a particular cause as I have in Ukraine.

“Even in Eastern Ukraine, which has a lot of cultural and familial ties to Russia, everyone hates Russia – even more than Ukrainian-speaking western Ukraine.

“They feel this is their brothers and their cousins attacking them, destroying them and planting bombs on them.

“They will never forgive this.”

The Front Page is a new daily news podcast from the New Zealand Herald, that will be available to listen to every weekday from 5am.

You can follow the podcast at nzherald.co.nz, iHeartRadio, Apple Podcasts, Spotify, or wherever you get your podcasts.