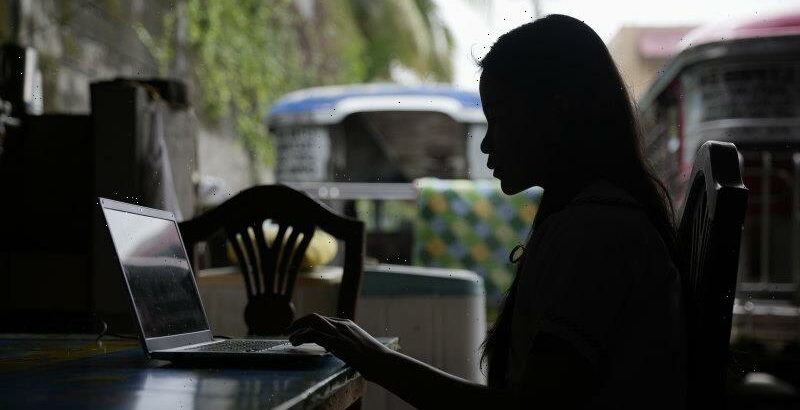 Singapore: When her vocational high school in Indonesia shut down last year, Dini was determined to continue her studies.

The 17-year-old had previously left school because she didn’t have a motorcycle or the 20,000 rupiah ($1.93) she needed each need to make the journey to and from her home in Brebes, a district of Central Java province. 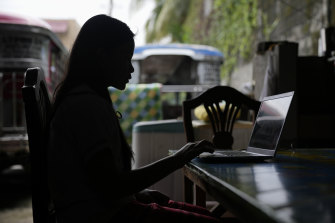 A grade school student uses her laptop at her home in Quezon City in the Philippines as she attends the first day of the new school year last month remotely.Credit:AP

She’d managed to find a way to resume school in the year before the pandemic. When Indonesia resorted to remote learning as the first COVID-19 wave hit, the multimedia major didn’t want another hurdle – her lack of internet access – to bring her down.

Initially, she used her friends’ mobile phones for the online lessons.

After many months, however, it became all too difficult and she quit to help her mother at home, too embarrassed to tell her teachers why she couldn’t go on.

In Indonesia, where most children have been unable to attend face-to-face classes for more than a year, it’s a familiar tale.

Yanto, a 14-year-old in South Sulawesi’s Bone regency, has also dropped out.

A grade-five student with autism, he already faced challenges making the hour-long trip from his village to his special school when his fisherman father was out at sea and unable to ride him there on his motorbike.

His family doesn’t own a smart phone and didn’t know how to help him study at home.

Instead, he has been working as a labourer drying fish and, pleased to have the extra money while his school wasn’t open, his parents have no plans for him to go back.

While nearly half a million schools across Indonesia have finally been permitted to reopen in a modified form in the past month as infection numbers have eased, there are many children like Dini and Yanto who haven’t returned. 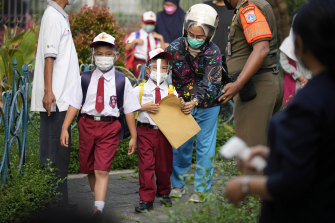 It is an alarming trend reflected across the archipelago and around south-east Asia, where schools have been closed for as long as 18 months.

A study of 112,000 poor families by the United Nations children’s agency (UNICEF) in Indonesia reveals 12,000 of their children had left school even before the global health crisis and three out of four who remained studying had at least one risk factor for dropping out.

They include having to work, which 53 per cent of the children now had to do as parents lost jobs during the pandemic, as well as caring for siblings, having a disability and child marriage.

The virus is still a real threat in Indonesia, with less than 20 per cent of its 270 million people fully vaccinated, but Indonesian Education Minister Nadien Makarim is more concerned about “the permanent impact of distance learning” than children catching COVID-19 at school.

“Research from various institutions shows how scary learning loss is,” he said.

Children’s advocates also highlight the drawbacks of home learning on the nutrition of children, particularly those from disadvantaged areas, and of the consequences of missing the socialisation of school.

“If the educators cannot translate the direct experiences into virtual learning, it is deeply felt. In the early days of the pandemic, during the transition [to online learning] we saw that the children of these groups of ages struggled the most. How do you expect a three-year old kid to learn from Zoom?”

In the Philippines, where face-to-face tuition has been on hold since schools closed their doors in March 2020, UNICEF education specialist Tess Felipe warns the “mental and psycho-social effect is going to be tremendous”.

President Rodrigo Duterte has been urged to green light a pilot program to shift the country’s 26.3 million school students back into classrooms.

Syaiful, 12, who can’t freely move his lower body or right hand, studies at home with his mother Nurhidayah in Banyumas, Central Java.Credit:UNICEF

But as the Philippines grapples with a new COVID case spike, another school year began remotely on September 13, with enrolment numbers down 2 per cent on pre-pandemic figures.

A further surge of secondary school drop-outs is expected this school year, particularly in Muslim-majority Bangsamoro on Mindanao, the poorest region of the country, according to a recent report on the effect of COVID-19 on child poverty in the Philippines.

“There [have been] drop-outs and many were related to the difficulties of the lessons … the children gave up because they don’t want to have difficulties and parents have challenges on helping,” Felipe said.

“And for some of the older kids in senior high school, aged maybe 17 or 18, they have to help earning money so that the family can survive.” 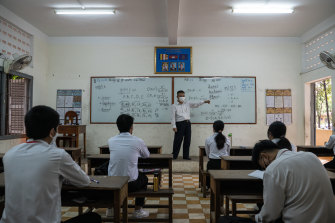 With south-east Asia’s largest nations facing monumental tasks to vaccinate their populations, UNICEF is trying to raise funds for jabs with its “Give the World a Shot” campaign.

But even in countries where vaccine access has been easier to come by, there are problems.
Quality of education shapes as another debilitating factor in Cambodia because of a decision by the Hun Sen government not to recruit new teachers in the next year and instead direct resources towards fighting the virus.

Cambodia has not been crushed as badly as Indonesia and the Philippines by COVID-19 but a seven-month freeze in physical schooling will have long-lasting ramifications, according to ChildFund country director Prashant Verma.

Schools began re-opening in Phnom Penh and beyond in September but Prashant fears 10 to 12 per cent of children won’t go back because only half of all students had access to online lessons.

“There was such great momentum created in the past four or five years with education reform in Cambodia,” he said.

“But this whole seven-month gap has literally shut down everything.

“It will take some time to re-energise and re-organise the whole process of helping teachers, parents and young children to come back to school.

“And if a second or third wave [of the virus] comes, God knows what’s going to happen. It will put us in very bad shape.“

* Children’s names have been changed