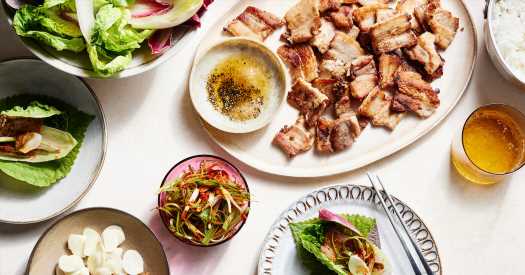 Eric wrote, “If I could have only 10 Korean dishes for the rest of my life, these would be it.” 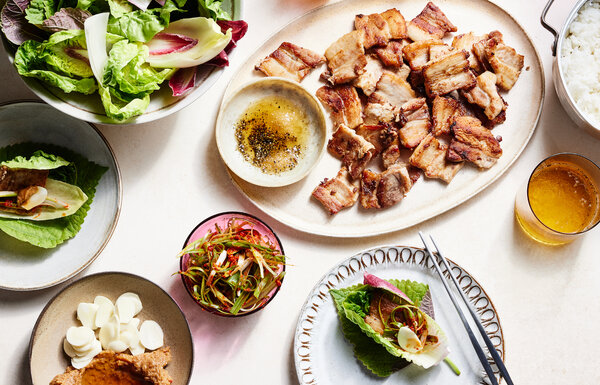 Good morning. “If I could have only 10 Korean dishes for the rest of my life, these would be it.” Eric Kim wrote this week in the Food section of The Times.

Eric’s a writer for the Food desk, an Eat columnist for The New York Times Magazine and a son of South Korean immigrants who has been attending his mother’s master class in Korean cooking since he was old enough to walk, “a little shadow following her around our suburban Atlanta kitchen, tasting her kimchi for sugar and salt; helping her pick and wash perilla leaves from the garden for a family dinner of ssam; or, later in life, sitting at the kitchen island watching her crush gim, that glorious roasted seaweed, over a homecoming plate of kimchi fried rice.”

What follows are Eric’s essential Korean recipes, dishes elemental to him and to his experience as a person of South Korean descent.

First up, doenjang jjigae, an umami-rich stew packed with doenjang, the fermented soybean paste, and sweet with onion, zucchini and radish. (Make it vegan by skipping the anchovies and using tofu in place of the rib-eye steak.)

Samgyeopsal (above) is “three-layer meat,” referring to how pork belly has a fat cap and two leaner layers of meat below it, one light and one dark. It’s an easy way to experience Korean barbecue at home.

Budae jjigae, or army base stew, is a carry-over from the end of the Korean War, when resourceful home cooks used leftover rations from the United States Army to build a satisfying stew: hot dogs and Spam burbling along in a broth of kimchi and gochujang, with noodles drifted with American cheese.

Miyeok guk is a seaweed soup known to many as birthday soup. Eric’s version omits the common beef broth in favor of one made with mussels, onions, garlic and anchovies.

Fried rice usually calls for chilled leftover rice, since using freshly steamed grains leads too often to clumpiness. But Eric’s sheet-pan kimchi fried rice can be made with fresh rice, since the heat of the oven draws out the moisture to deliver crisp-chewy results.

Seolleongtang is a dead-simple, comforting soup made from beef bones and scallions, cooked over multiple hours to provide what Eric calls “a fatty redolence.” It’s finished with a kind of gremolata of scallions, garlic and salt.

Fish jorim is a staple of Korean home cooking, made best with whatever fatty fish you have, in a broth of soy sauce, garlic and ginger.

Before there was Korean fried chicken, there was tongdak gui, a kind of rotisserie chicken brined in a soy-sauce mixture enlivened by ground white pepper.

And of course Eric delivers a recipe for tongbaechu kimchi to round everything out, quartered napa cabbage salted and sauced, then put up in the refrigerator to ferment for as long as you can manage before eating it.

There are thousands and thousands more of our recipes waiting for you on New York Times Cooking. You do need a subscription to access them, yes. Subscriptions support our work. If you haven’t already, would you please subscribe today? Thanks! (Write [email protected] if you need help with that.)

Now, it’s nothing to do with arepas or colcannon, but I ripped through Adam White’s tense debut novel, “The Midcoast,” about family, crime and small-town Maine.

In the Smithsonian Magazine, April White has a fascinating excerpt from her new book, “The Divorce Colony: How Women Revolutionized Marriage and Found Freedom on the American Frontier.”

The Danish political thriller “Borgen,” on Netflix, was a highlight of my early pandemic binge-watching. My colleague Tina Jordan reminded me there’s now a fourth season. I’m sipping through it, to make it last.

Finally, here are the Jayhawks, “Blue.” Play that — play the whole album — this week while you’re cooking. And I’ll be back on Friday.