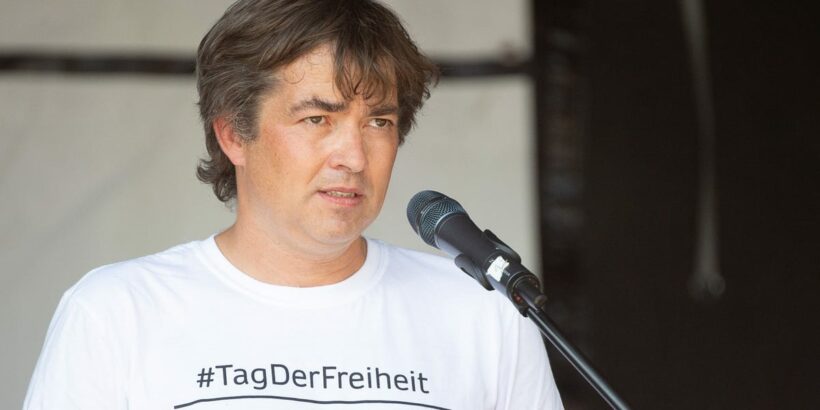 The leader of Germany's anti-lockdown movement has called on supporters to pause its protests until the spring. The decision coincides with press reports that question the group's finances.

Michael Ballweg, the founder of the so-called Querdenken-711 or "later-thinking" group, said in a Telegram video message over the Christmas period that he will be "indefinitely stopping large-scale Querdenken protests," adding that he recommends the group's branches do the same, according to Der Spiegel.

The Stuttgart-based software entrepreneur, aged 46, did not give a precise reason for why the group was taking a break.

The announcement came several days after German media separately reported that Ballweg was making a profit from Querdenken merchandise, charging people for appearances with him, and asking supporters to donate to what was said was the movement's bank account even though it was his own.

In the last few months, Querdenken-711 has been behind a series of large-scale demonstrations against COVID-19 restrictions in Germany. At one point, protesters attempted to storm the Reichstag — the country's parliament in Berlin.

The group was put on the watchlist of domestic intelligence agencies earlier this month after experts feared it was becoming infiltrated by extremists and far-right radicals, including Neo-Nazis.

One of Ballweg's slogan for the group is: "Where we go one, we go all," a phrase lifted directly from the QAnon conspiracy theory.

In interviews, Ballweg has refused to condemn racism and fascism, instead describing Querdenken as a "democratic movement" with no leadership that is "open to anybody," according to German broadcaster RBB.

'The money goes to Stuttgart'

Despite his previous comments, a recent investigation by Netzpolitik and ZDF Magazin Royale found that Ballweg has very much been at the center of the movement.

According to the report, Ballweg receives 6-12% from each sale of merchandise on the movement's official website. The most expensive item on the website is a "Querdenken" jacket selling for €69,90 (around $80).

When a local offshoot of the movement was asked whether they receive any share of the proceeds from the website, one woman said: "We don't get anything from it. The money goes to Stuttgart. We're supposed to do it that way," according to Netzpolitik and ZDF. Other local groups have reported similar things.

Ballweg has also asked for supporters to donate to the movement, but the bank account attached to the website is personal.

According to German tax laws, people can accept private financial gifts that don't exceed €19,999 ($24,448) over 10 years. Ballweg never registered the group as an association, company, or foundation, and therefore was exempt from issuing invoices.

Ballweg also has charged people to appear with him on stage. This was the case with German television producer Thomas Hornauer, who allegedly paid the Querdenken founder up to €20,000 ($24,449) to make several appearances with him at rallies, the investigation found.

"In Germany, you have to spend a lot of money to get thousands of people together," Hornauer told Netzpolitik and ZDF.

The two men have also signed a contract that gives Hornauer the rights to use images and sound recordings by Ballweg and "Querdenken-711."

Insider has reached out to Ballweg for comment but has not heard back in time for publication.

Ballweg founded the group "Querdenken 711" in mid-2020 as a response to Germany's first lockdown amid the coronavirus pandemic.

Its name loosely translates to "thinking outside the box," while the number 711 represents Stuttgart's telephone area code, the city Ballweg is from.

The movement was even given American backing, after Robert F. Kennedy Jr., a prominent anti-vaxxer and the nephew of former president John F. Kennedy, spoke alongside Ballweg at one of their largest rallies in Berlin in August.

Earlier this week, German Chancellor Angela Merkel announced the country would extend its national lockdown that has been in place since early December for another month.

Like other European countries, Germany has seen a spike in coronavirus cases and deaths over the ongoing winter period.

According to a tracker by Johns Hopkins University, the country has reported more than 1.9 million COVID-19 cases since the start of the pandemic and just over 40,000 deaths.