Allowing households to open their doors to one or two close friends and family in a “germ bubble” is being considered as a possible route out of stage four lockdown and the loneliness that goes with it.

Under previous more moderate restrictions, Victorians were allowed to host as many as five and then 20 people inside their homes but epidemiologists say a new bubble system would be far more conservative perhaps allowing just one dedicated outsider to visit a home. 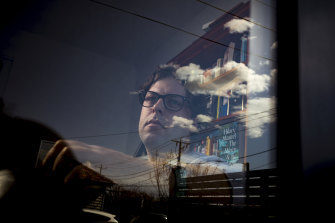 A bubble model is already in force in New Zealand, where people are advised to stay within their household under level four restrictions, and expand their bubble to close family, caregivers or to isolated people under level three.

During England's lockdown, single people living alone or sole parents were allowed to visit another household.

Leading epidemiologists say that some type of bubble model could be introduced in Victoria in the coming weeks, though it could be complicated to develop, and risk hurting people’s feelings if their wish to see someone was not reciprocated.

“Anything you think up, there will always be downside,” said Professor Mary-Louise McLaws, an epidemiologist and advisor to the World Health Organisation.

In the bubble model she is advocating, a handful of people that are already intimately associated with a household would be able to visit, such as close friends who live alone or people’s elderly parents.

Professor Catherine Bennett, Deakin University’s chair of epidemiology, said a "social bubble" model in Melbourne could initially see households limited to seeing five people, or allowed to connect with another two or three households, for example.

"Keep it tight," she said. "So if the virus gets into your bubble, it is not then going to spread out to 100 people and your grandparents."

Professor Bennett believes creating social bubbles could help businesses reopen by reducing the risk that people will bring coronavirus to work, through cutting down community transmission.

As for formalising the arrangement, Professor McLaws said people might register those in their bubble on an app and if any changes were made there would have to be a two-week gap between one set of people leaving and another group joining, to reduce the risk of the virus moving between them.

She stressed the model wasn't about allowing people to socialise in person again, or hold dinner parties with friends, but easing the mental health toll on people who have been isolated.

“This compassionate bubble wouldn't be able to be changed dramatically or every day or every week, so that that you could socialise with anyone who you wanted to,” she said.

“What you are just doing is adding one or two people.”

Keep it tight. So if the virus gets into your bubble, it is not then going to spread out to 100 people and your grandparents.

Will Mr Beitzel would love to be in a germ bubble. All he wants is to be allowed to spend some time, face to face, with a friend.

Mr Beitzel, 29, lost his partner to cancer in June. Lockdown has forced him to mourn her alone.

"It's really tough. During a grieving process, you want as many people around you as possible," he said. "The lockdown has forced me to face every day by myself."

He has already chosen his bubble person – a lifelong friend who also lives by himself. "It would just make such a difference to have one person I could physically talk to, someone I know and trust," Mr Beitzel said.

Responding last week to a question on Twitter from someone who said they had “no human contact” for four weeks, Chief Health Officer Brett Sutton said household bubbles were “under active consideration”.

Burnet Institute epidemiologist Professor Mike Toole said it made sense from a medical point of view to allow households to add another person to their bubble, as he did not think it would significantly increase the risk of coronavirus spread, "particularly if we wait another week and a half".

But he said there were many variations to the bubble model and it would require significant planning and foresight, while it was likely to pose challenges for police attempting to enforce it.

"Would it have to be within five kilometres? I think that would make sense and make it easier for the police."

Asked if it could mean that people would be left without someone to visit them, as their preferred person had nominated someone else, Professor Toole said the government could avoid that scenario by allowing every household to have one visitor.

“They may avoid calling it a bubble,” he added.

Professor Toole said a big mistake was made when visitor restrictions were too quickly expanded to five people and then 20 following the first wave of the virus in Victoria.

“We can’t do that again,” he said. "I think it would have to go from zero [visitors] to one first.”