Philadelphia: For America's overwrought nervous system, the 2020 presidential campaign felt like a punitive marathon. And now the finish line has been moved back.

In most presidential elections, the results become clear within hours of the polls closing, the losers graciously concede, the winners thank everyone and then celebrate, and the public accepts the results long before the Electoral College formalises them in December.

That obviously hasn't been the case in 2020.

But no matter what happens, this election is unlikely to approach a record for the longest wait between an Election Day and a final determination of the outcome.

Here are three cases from the Electoral Hall of Fame. 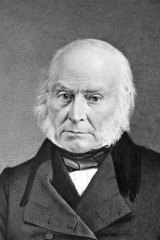 John Quincy Adams became the first son of a President to also get the top job. Credit:Matthew Brady

Balloting ended on December 1 without a winner. The top vote-getters were war hero Andrew Jackson, John Quincy Adams, son of the second president, William H. Crawford and Henry Clay, who years later would utter the famous phrase "I'd rather be right than president" in defending his pro-abolitionist views.

No candidate obtained an electoral majority, so the election went to the House of Representatives, which had to choose among the top three. That eliminated Clay and Crawford had suffered a stroke.

That left Jackson and Adams, and even though Jackson had won a plurality in the election, on February 9, 1825, the House made the Adams family the nation's first father-son presidential team.

This centennial year election would be the reigning wait-time champion.

Democrat Samuel J. Tilden defeated Republican nominee Rutherford B. Hayes by more than 250,000 votes, or by three percentage points, a clear majority in the popular vote. But Tilden came up one vote short of then electoral majority, with 184 out of the 369 total. Hayes received 165 electoral votes, but the remaining 20, among three Southern states, remained in dispute.

It was not a civil dispute. Republicans accused Democrats of using force and intimidation to keep Black people from voting. Democrats alleged that Republicans dumped ballot boxes into bodies of water and smeared ink on ballots to make them illegible.

After the Civil War, profound divisions persisted between the North and South. Southerners wanted an end to Reconstruction and the presence of federal troops, and this ended up being Hayes' serpentine path to the presidency.

To resolve the election impasse, Congress created a commission in January 1877 that included House members, senators, and Supreme Court justices.

But as so often happens in politics, the real action was in the back room. In the end Republicans agreed to remove the federal troops from the South, in effect ending reconstruction, and Democrats promised to respect the rights of black Americans – a promise they immediately broke, rolling out the "Jim Crow" laws that would enforce segregation for 90 years. In return, Hayes would become president.

The deal, which became known as the Compromise of 1877, was sealed on March 2, and Hayes was very quietly inaugurated on Saturday night, March 5.

The election came down to Florida and the networks projected that George W. Bush was going to win the state narrowly and the presidency. So Democrat challenger Al Gore called his rival to say he would concede.

But then updated vote counts tightened the margin and Gore called Bush back to say never mind. Bush, who had prepared his victory speech, was nonplussed. 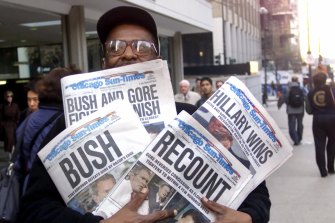 Bush: "Let me make sure I understand. You're calling me back to retract your concession?"

Gore: "You don't have to get snippy about this."

Bush was declared the winner by 537 votes in Florida, where his brother Jeb was governor. Gore demanded a recount and litigation followed, and the nation was introduced to the concept of the "hanging chad".

Some Florida counties used ballots with perforated squares next to candidates' names that voters were to puncture. A machine then would read the holes.

The problem: Some chads were left hanging, and the issue of counting a ballot with hanging chads was central to litigation that dragged on for weeks. At one point, former Pennsylvania governor Ed Rendell, then head of the Democratic National Committee, took some heat from party leaders for telling Gore to drop it and move on.

After the Supreme Court ruled against a recount, Gore conceded on December 13.