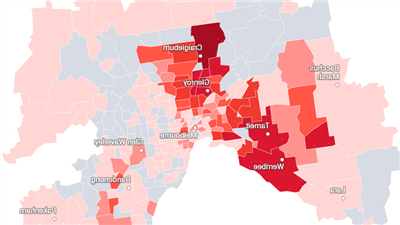 Active COVID-19 case numbers have surged in Melbourne’s north and west over the past week, but are on their way down in Shepparton, Health Department data shows.

I have added an extra colour to the map since the last time it appeared on The Age’s website, for postcodes where there are currently more than 200 active cases.

There is currently one postcode with more than 200 active cases: 3064 (that takes in Craigieburn, Donnybrook, Kalkallo, Mickleham and Roxburgh Park), in Melbourne’s north. In this area there are 263 active cases, compared with 48 a week ago.

The Craigieburn area (postcode 3064) has had the most active cases of any Victorian postcode since the start of this week, while postcode 3046 (the Glenroy area) had the second-highest with 150.

The graph below shows the postcodes in Melbourne’s north that have recorded the biggest increase in active cases over the past week:

This time last week, two postcodes in Melbourne’s west – 3025 (the Altona area) and 3029 (Hoppers Crossing, Tarneit and Truganina) – had the most active cases. And while they have been overtaken, their active case numbers have continued to grow.

On the flipside, the Shepparton area has recorded the biggest drop in active cases over the past week.

Here are some maps showing the first and second dose rates for each local government area in Victoria: