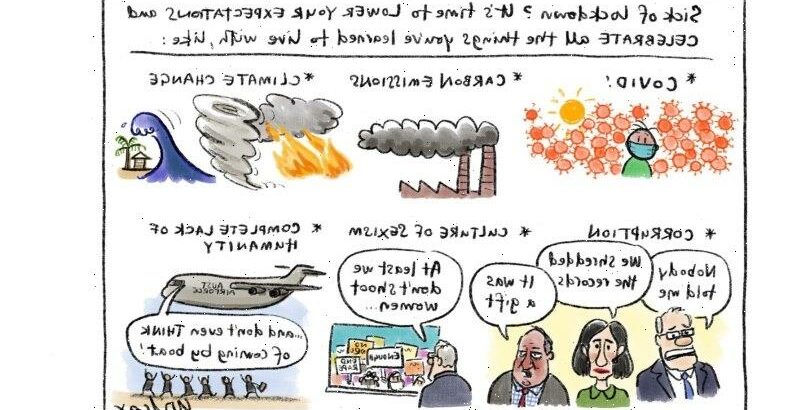 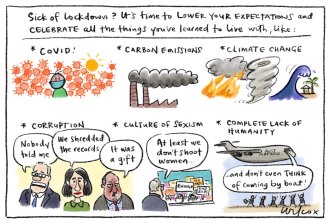 The research we need

Thank you, Jenna Price, for enlightening us about Stuart Robert’s disgraceful action – ’Under cover of Christmas, [Acting] Education Minister Stuart Robert overruled the experts” (The Age, 29/12).
Governments camouflage bad news, but to deliver it late on Christmas Eve is beyond sneaky. It is cowardly. The six approved research projects which Robert rejected include two on climate and two on China. His behaviour tells us that the government is, shamefully, not interested in furthering its awareness of either, yet both areas will be vitally important in the coming year.
Elaine O’Shannessy, Buxton

The federal government should have used its purchasing power to buy rapid antigen tests in bulk, on-selling to the states and the private sector. This could have been done right up to the point of full-cost recovery if the government’s ideological inclinations were so constraining that it could not grasp the public health benefits of providing subsidised or free tests. Its stance on this issue is a scandalous as it is predictable.
Tim Thornton, Northcote

Of course the government is refusing to buy home testing kits for general use in spite of the medical advice. They cost money and the more money it spends there, the less it will have for pork barrelling, which seems to be the only place it is willing to “hold a hose”. Shame on it.
Vivien Wertkin, St Kilda

Why is the federal government prepared to pay private pathology companies $85 for a COVID-19 PCR test but not $10 to $15 for rapid antigen tests?
Gretel Lamont, Aireys Inlet

It is entirely understandable that case numbers of COVID-19 are soaring in Victoria as we abandon preventive measures and consequentially track the pattern set in New South Wales.

However what is inexplicable is why the number of deaths in Victoria are consistently higher than NSW when that state has much higher numbers of cases. Are Victorians more susceptible or is it a difference in the way deaths are classified?
Daniel Cole, Essendon

In support of our state

Given the number of COVID-19 cases in NSW, I invite Josh Frydenberg to return to Sydney, dine at an outside café without a mask and gloat to Victorians that the sun is shining in that city.
Rob Walton, Sandringham

With all the conversations and soul searching we should be having around climate change, refugee policy and Indigenous health, it is disheartening to see political airspace taken up with discussions around religious discrimination and registering to vote in Australia. If ever there were two issues that are solutions desperately seeking non-existent problems, it is these.
Cheryl Day, Beaumaris

A matter of respect

To clarify, with certain exceptions, exclusion based on the grounds of gender, race, sexuality, age and other human conditions is discrimination, not a legitimate value: the only “value” it upholds is discrimination itself, generally based on notions of moral, social, physical and intellectual superiority. This goes to the root of the matter and should not be glorified or reinforced as a value. It is respect that is of value, and respect is a two-way street.
Emma Borghesi, Rye

It is rather tortuous of Ross Gittins – “This isn’t America, so please stop acting like a Yank”(Business, 27/12) – to include wanting “to require people to show ID before they can vote” in his list of issues which prove that some on the “Right” are aping the United States. Almost all European nations, including Ireland and France, require ID from voters. As does India, Mexico, and Brazil. In fact, Australia copies (or to use Ross’ words) apes only New Zealand and Britain in not requiring voter ID.
Michael Doyle, Ashburton

I could not disagree more that “the winner in 2021 was the MCG crowd” (Letters, 29/12). I was there to watch what turned out to be a captivating second day of play. I would have presumed that would have been the aim of all present.

Therefore, to see heads turned at the slightest distraction, seemingly minutes at a time, or those present easily cajoled into taking part in the totally nonsensical Mexican wave, was not a credit to the crowd.

Instead it was a crowd disturbingly disrespectful of the game of cricket. Indeed, in so doing it showed a total ignorance of the skills of the many world class cricketers taking part, particularly during the first two sessions when it appeared that England, through some terrific fast bowling, might be in the contest. The crowd was not a winner, it was a disappointment.
Peter Schumacher, Shepparton

As much as the Aussies dominated the Test, how did Nathan Lyon (8) get a higher rating than Jimmy Anderson (7.5) in your Australia and England report cards (Sport, 29/12)’? Very much a home-town newspaper decision.
Peter Venn, East Bentleigh

Eating our meals in peace

I find it unpleasant the way waiting staff nowadays whisk away the plates of those diners at a table who have finished a course, leaving the slower eaters conscious of “lagging behind”. Would it be a problem to actually leave the clearing away until the last diner has finished? So much more respectful, I feel.
Virginia Reddaway, Hawthorn

Voting for our future

Josh Frydenberg topped the Resolve Political Monitor Poll with a net likeability rating of 3per cent (The Age, 28/12). This is an indictment of the esteem in which our leaders are held by Australians. Bob Hawke and Barack Obama’s charisma was important in delivering office but they also offered hope, policy and excitement. We need a government that does not force voters into believing impoverishment awaits around the corner if they vote for an unbranded person.

Voters need to envision “what the future might hold”, with and without change, for our planet, the integrity of our leaders, our freedom of expression and practice, use of our taxes and how we interact beyond our borders.

Independents will not form government, but they present points of view which question, moderate and fashion legislation to effect meaningful change on issues considered by many to be more important than unfettered economic development.
Jennifer Quigley, Balwyn

In her hilarious article, Julie Szego (Opinion, 29/12) wishes that the new year will bring an outbreak of common sense. There is little chance of that because our population seems to have reached herd immunity.
Ralph Böhmer, St Kilda West

We have got used to much reduced editions of The Age being published over Christmas (still at the same price though), but this year’s Boxing Day edition really took the cake. Out of a total of 60 pages, 23 were full-page advertisements (19 of which were for Harvey Norman) with another three half-page ads. Plus a 24-page advertising insert for My Chemist. Contempt for their subscribers, really.
David Parker, Geelong West

Back in the old days…

I wonder if one day teenagers, like Hector in the cartoon Zits (29/12), will not know what a newspaper is.
Susan Munday, Bentleigh East

Vaccination wasn’t a race (until it was). Now we have a RAT race.
Wendy Knight, Little River

So instead of queueing for COVID tests, people will rush out and queue for RAT kits.
Marie Nash, Balwyn

Maybe we should start planning for the next variant now, instead of playing catch-up later.
James Moseley, Frankston

Hopefully, ScoBo will be picked for the PM’s XI.
Graham Cadd, Dromana

What goes around comes around – eventually. Remember Frank Tyson’s 6/16 in the morning session of the last day, 67 years ago.
Campbell Paine, Toorak

Thanks to Wilcox for a year of insightful cartoon brilliance.
Diane and Ian Maddison

In Australia we have bushfires. Leave wild fires (Letters, 30/12) to the other side of the Pacific.
Margaret Callinan, Hawthorn