Restaurant owners looking forward to a buzzing post-COVID summer have been rattled by plans by the City of Melbourne to force them to pay to keep the outdoor dining areas they set up during the pandemic.

Councillors will on Tuesday vote on a recommendation by City of Melbourne management to reintroduce fees from November for outdoor dining permits across the municipality except in Docklands. 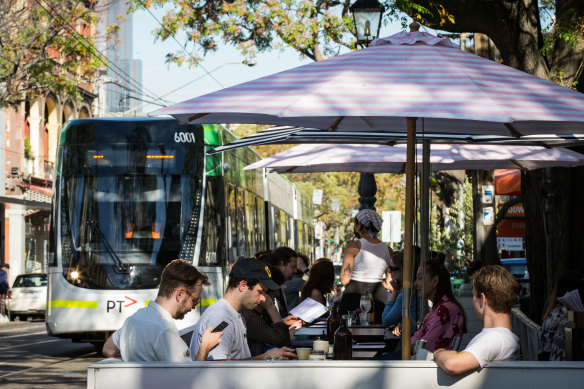 Melburnians have been using parking spaces for outdoor dining over the past two years.Credit:Darrian Traynor/Getty Images

Hundreds of businesses signed up for free permits to establish outdoor dining on footpaths, in laneways and on street-side car parks after the council began waiving fees in October 2020 as part of its plan to reinvigorate the city after the first COVID-19 lockdown.

According to the City of Melbourne, the number of outdoor dining permit holders doubled to 1300 and more than $2.3 million worth of fees were waived.

Reintroducing the payments in November would create about $716,000 in revenue this financial year and allow the council to take back some of the 167 parking bays currently converted to outdoor dining space.

Dining permit fees for parking spaces (also called parklets), which cost about $8000 each in the CBD, would be gradually reintroduced with a 50 per cent discount until July 2023.

Restaurateur Jessi Singh said while he understood the City of Melbourne had to start charging eventually, it was “the worst time” to face a fee of about $12,000 to keep the three parklets he uses outside his CBD restaurant Daughter In Law. The fee will double to more than $24,000 next financial year.

“The timing is so bad. They could have at least let the summer go by,” Singh said. “This is putting another cost on struggling businesses when the city hasn’t even recovered yet.”

He said outdoor dining had helped create buzz on Melbourne’s streets but he was now considering shutting down the colourful space he spent about $30,000 fitting out.

“If you have a guarantee of nice weather in summer you’d keep it but because it is so unsure, half the time people don’t want to use it,” he said.

Kim Berkers, general manager of the Scott Pickett Group, said the fees to keep outdoor dining at Longrain’s three parklets could be “detrimental” given they were so weather dependent.

“I would be inclined to think we wouldn’t go ahead with it,” Berkers said. “When you’re relying on the weather to be good, it’s all a bit dodgy.”

Berkers said she hoped the council would delay the reintroduction of the fees as she felt they would be “counterproductive” to the city’s revival.

But restaurateur Chris Lucas, who uses a parklet outside Chin Chin, said he supported the return of fees because he hoped it would encourage business owners to take care of their spaces or clear out.

“I see a lot of parklets around that are not being maintained and [are] a bit of an eyesore,” Lucas said. “Coming into summer, I think the timing is right and the fees are quite modest even for a small operation.”

City of Melbourne data shows foot traffic has steadily increased since June 2021 and the night-time spending in July was 28 per cent higher than in June 2019.

“The data tells us that now is the right time to return to our regular outdoor dining permitting processes,” acting Lord Mayor Nicholas Reece said.

City of Melbourne’s proposal would involve waiving outdoor dining fees for the 107 permit holders in Docklands for another eight months – resulting in a loss of $34,000 in council revenue – because the economic recovery has been slower.

Outdoor dining fees were extended until October 31 by the council in March this year. The initiative has been funded by the $200 million Melbourne City Revitalisation Fund, delivered by the local and state government.

The city’s proposal also includes a recommendation to continue freezing permit and application fees for buskers until the end of the financial year, resulting in $22,000 of lost revenue.

If the proposal is endorsed, the council would remove infrastructure at no cost to restaurants that opt to hand back their parklet dining spaces.

Businesses experiencing hardship that want to retain outdoor dining would be able to apply for a flexible payment plan to pay in instalments.