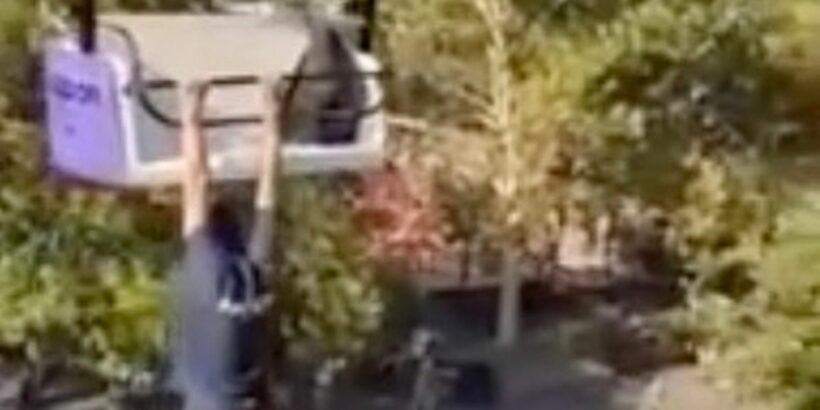 A woman who witnessed a man take a fatal 50-foot plunge from a fairground ride said she thought it was an elaborate stunt.

She believed the man was 'a gymnast practicing for American Ninja Warrior,' but to her horror, he fell to his death.

The scene unfolded Saturday on the Sky Ride at the Lagoon Amusement Park in Farmington, Utah. The Sky Ride is a ski-lift typed amusement that carries park-goers around the site.

Onlookers said that the man 'looked calm' and didn’t appear to be making any effort to get back into the gondola, as he hung from the safety bars.

The unnamed 32-year-old man fell about 50 feet and was rushed to hospital in a critical condition, where he later died from his injuries.

Lucy Grace Astilla recorded the tragic incident while riding with her husband, the Gephardt Daily of Utah reported.

“I thought it was a stunt, or he is a gymnast practicing for ‘American Ninja Warrior,’ rehearsing, but then I noticed he didn’t have any equipment that would save him from a fall,” Astilla told the paper.

American Ninja Warrior is an NBC show where some of the most elite athletes in the US compete on the world's most difficult obstacle courses.

She said she shouted out to the ride operator: "'Hello, can you, can you please stop the ride? Someone is hanging down.’ And that’s the time we heard screaming from other people, but we were by the roller coaster, so I think maybe it was for that, but it wasn’t.

"The screaming was because the man fell.”

Mrs Astilla said that she shared the video with news outlets after she saw false reports that the ride had malfunctioned.

She added: "From that time, I have had no good sleep. I’m still having a traumatic experience, but I think I can manage."

The ride has a safety bar that prevents passengers from getting out of the chair while it’s in motion.

"That’s part of what we checked, and it was functioning as it should," said Farmington Police Chief Wayne Hansen.

"It would appear he did something to get around that."

He added the man was alone on the ride but that family members had accompanied him to the park.

Hansen said park management has been cooperating with the police investigation and said he was sure they would also do their own "own independent look into things".

He went on: "It’s really a matter of what he was doing and why, and some of it we may never know."

Adam Leishman, a spokesman for the park, said that the rides are inspected before the start of every working day and that safety information was "either printed or said verbally," for visitors before they boarded.

"Our hearts go out to that man's family and friends, and our guests and our employees that witnessed the incident," he added.