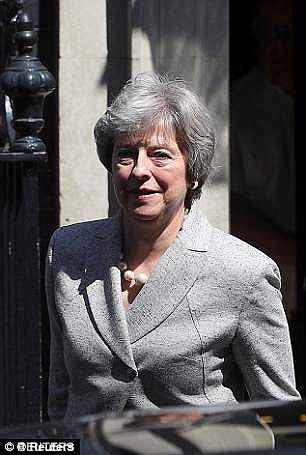 Theresa May has today told Donald Trump his steel tariffs are ‘unjustified and deeply disappointing’ in a phone call.

The Prime Minister’s official spokesman said the 30-minute call was ‘constructive’ and said they agreed to discuss the issue further at the G7 summit in Canada later this week.

It was the first time the two leaders have spoken since  the US President imposed his the 25 per cent levies.

The PM’s official spokesman said: ‘The Prime Minister raised the US decision to apply tariffs to EU steel and aluminium imports which she said was unjustified and deeply disappointing.

‘She said the US and UK and EU are close national security allies and we recognise the importance of the values of open and fair trade across the world. The prime minister also underlined the need to safeguard jobs.’

The US President has imposed the hefty tariffs in an attempt to curb China’s aggressive steel dumping.

Beijing has dumped a glut of steel on the global market in a move which has forced down prices and been blamed for the loss of jobs in the so-called rust belt of America.

Mr Trump’s ran on an ‘America First’ manifesto which pledged to impose big tariffs to hit back at China.

But some of America’s closest allies – including Britain and the EU – have been caught in the trade war.

Brussels has threatened to hit back by imposing a wave of tariffs on US goods including motorbikes, jeans and orange juice within weeks.

This has fuelled fears the world is set to lurch into a trade war which will push up prices.

International Trade Secretary Liam Fox warned MPs in the Commons today that the tit for tat protectionism could ‘ramp up into a global trading disaster’.

Could trade war with the US damage the UK’s car industry?

There are fears that an escalation in the trade spat with the US over steel and aluminium tariffs could cause serious damage to other parts of the UK economy.

The EU has threatened to target goods such as bourbon, blue jeans and Harley Davidson motorbikes if Donald Trump does not back down.

But in March, the US president said Brussels increasing its ‘already massive’ duties would trigger another round of tit for tat.

He said he would ‘apply a tax to their cars which freely pour into the US’.

‘They make it impossible for our cars (and more) to sell there. Big trade imbalance!’ Mr Trump tweeted.

The US is the largest export market for EU cars – making up a quarter of the total value of around £170billion a year.

Germany is responsible for just over half of the bloc’s car exports.

But nearly 15 per cent of the 90,000 cars exported from the UK each year go to US markets.

Hundreds of thousands of jobs in Britain rely on the car industry, with companies such as Nissan and Honda operating major plants.

Dr Fox said: ‘It is right to seek to defend our domestic industries from both the direct and indirect impacts of these US tariffs.

‘The response must be measured and proportionate and important that the UK and EU work within the boundaries of the rules based international system.’

He said Britain has repeatedly warned America about the risks of imposing tariffs.

The minister welcomed the EU’s decision to take the matter to the World Trade Organisation, but warned that it could be difficult for the WTO to act.

He said: ‘The problem with using national security, as has been done in this case, is twofold.

‘Were the United States to be successful it sets a precedent for others do the same and to use national security as pretext for protectionism.

‘And secondly, it leads the WTO into the realms of having to determine what is and what is not acceptable as a definition for national security, something the WTO has always shied away from.’

Dr Fox also refused to say whether the UK would back tit for tat tariffs from the EU.

He said: ‘We still want to see what the measures themselves are, specifically we have been talking to the Irish government about the issue of bourbon being on the list because of the potential implications for the Scotch whisky industry and the Irish whiskey industry.’

The US president’s duties on imports came into force late last week despite a wave of protests.

The European Commission plans to target US products such as Jack Daniel’s whiskey, Levi’s jeans and Harley-Davidson motorbikes.

The US shrugged off the implications for its economy, despite Mexico promising similar measures.

The decision to hit the EU, Canada and Mexico with tariffs caused tremors across financial markets and led to warnings from the steel industry. 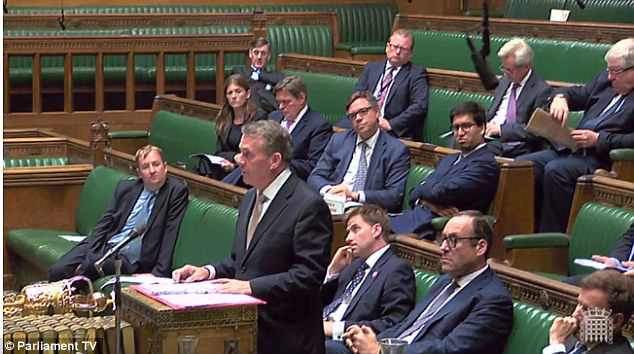 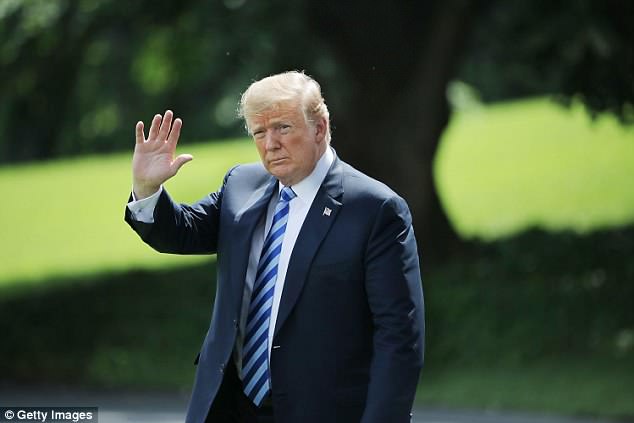 Ministers are scrambling to find ways to protect the UK steel industry – which employs more than 30,000 people.

And there are also fears that the dispute could spread to hit car exports and derail hopes of a post-Brexit deal with the US.

In March Mr Trump warned the EU against hitting back by increasing its ‘already massive’ tariffs, saying he would ‘apply a tax to their cars which freely pour into the US’.

The President’s decision to press ahead with his ‘America First’ programme has fuelled fears about deteriorating transatlantic relations.

Under the measures, Chinese, British and EU companies will be levied with duties of 25 per cent on steel imports to the US from today, as well as 10 per cent on aluminium.

The White House has insisted the measures are justified on national security grounds to protect America’s domestic steel industry.

The US concerns are directed at China, which has been accused of dumping cheap and low-quality steel on international markets. 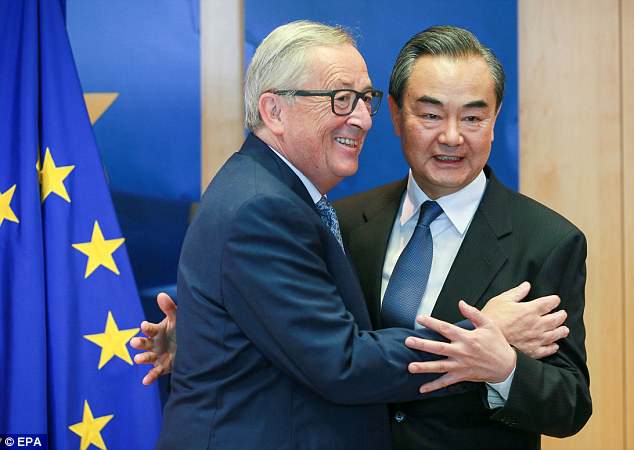 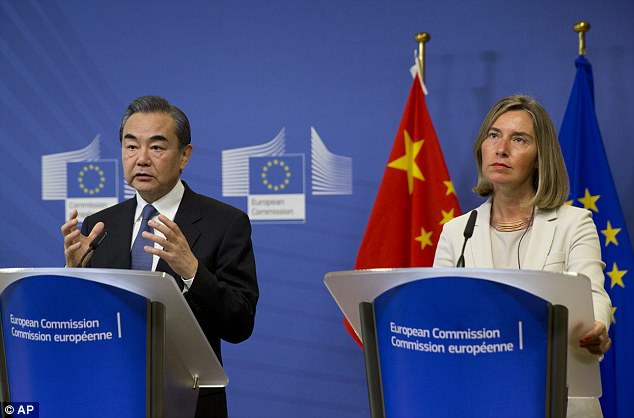 Trump’s tariffs explained: What are they, how has the world reacted and what are the implications for Britain and global trade?

Donald Trump’s administration imposed new trade tariffs on steel and aluminium imports into the US on the EU, Canada and Mexico.

Here we explain all the key issues and the implications at stake. 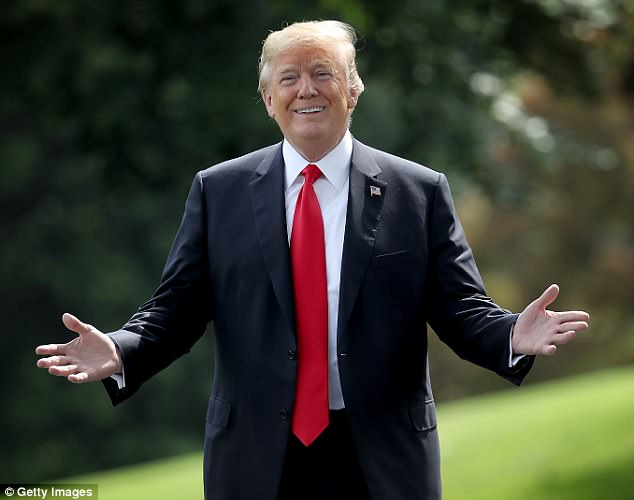 New tariffs: Donald Trump’s government has imposed new trade tariffs on steel and aluminium imports into the US from the EU, Canada and Mexico

What has Donald Trump’s government done?

The US government has announced it will begin imposing steel and aluminium tariffs on US allies Canada, Mexico and the European Union.

What does ‘imposing a trade tariff’ really mean?

That any steel and aluminium imports from the EU, Canada and Mexico to the US will be slapped with a 25 per cent and 10 per cent tax respectively.

The tariffs will hit a wide range of products, including plated steel, slabs, coil and rolls of aluminium, all of which are used extensively within the US manufacturing, oil and construction sectors. 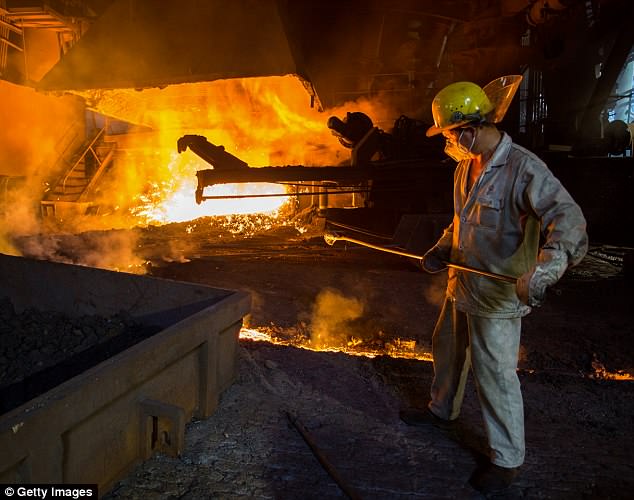 Big business: Canada, Mexico and the EU together exported around £17billion worth of steel and aluminium to the US in 2017

When do the new tariffs take effect?

The new tariffs imposed on Canada, Mexico and the EU took effect at midnight on Thursday 31 May.

Why has Trump done this?

Trade played a major role in Trump’s presidential campaign back in 2016. During that campaign, he blamed unfair global trade deals on job losses within the US.

Speaking at a metals recycling facility in Monessen, Pennsylvania, in June 2016, Trump said: ‘We tax and regulate and restrict our companies to death and then we allow foreign countries that cheat to export their goods to us tax-free. How stupid is this? How could it happen? How stupid is this?’.

He added: ‘We are going to put American steel and aluminium back into the backbone of our country.’

During the speech, Trump warned he would impose taxes and tariffs on foreign countries importing their products into the US.

Before this week, what tariffs had Trump already introduced?

Trump was primarily taking aim at China, which had been dubbed by the president as the ‘bad guy’ of global trade. The tariffs were supposed to come into force the following week.

After a backlash, Trump then initially suspended the tariffs for Argentina, Australia, Brazil, South Korea, Canada, Mexico and the EU from the tariffs, pending further negotiations.

If those negotiations did not make sufficient progress in Trump’s eyes, then the tariffs would be imposed at a later date. This is what has ended up happening.

US Commerce Secretary Wilbur Ross has said talks with the EU, Canada and Mexico had not made enough progress to warrant a further reprieve, meaning the geographical reach of the tariffs has been extended.

Also in March, Trump scheduled $50bn worth of tariffs on hundreds of Chinese industrial goods to come into force in June – but talks are ongoing in Beijing to avert a possible trade war (see below). 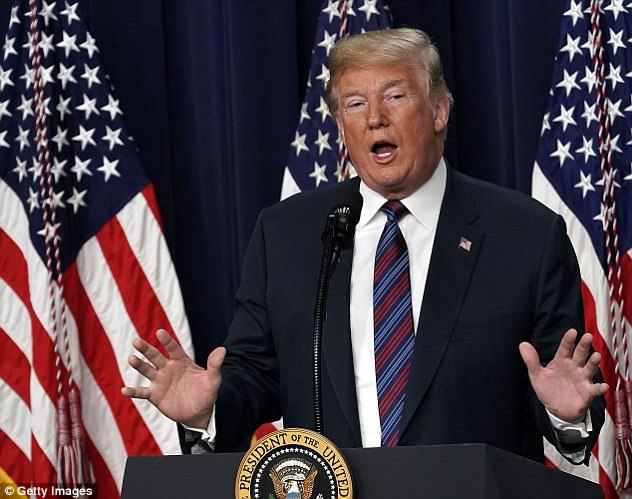 Airing his views: Trade played a major role in Trump’s presidential campaign back in 2016

What are the implications for Britain?

Around 7 per cent of the UK’s steel output, 350,000 tonnes, was exported to the US last year. For this reason, the industry fears the tariffs could cause serious damage.

The UK’s steel sector remains a major employer, despite having shrunk significantly in recent decades.

The director of trade body UK Steel, Gareth Stace, said he was ‘very, very worried’ about the potential impact of a ‘double whammy’ on British producers from the Trump administration’s decision.

UK steel producers could be shut out of an American market where they sold around £350million of exports last year, while also facing increased competition from a ‘tsunami’ of cheap steel diverted away from the US, he said.

Mr Stace told BBC Radio 4’s World at One it was too early to speculate on the likely impact on jobs, but said: ‘At worst, we could fall straight back into the crisis we suffered in 2015/16, which was the worst steel crisis in a generation.

‘We are heading for a trade war, which is going to be all losers – there will be no winners. The US economy will suffer as much as any other economy.’

Mr Stace said the EU should activate ‘safeguard measures’ to prevent European markets being disrupted by a surge of as much as 25million tonnes of steel diverted from the US. 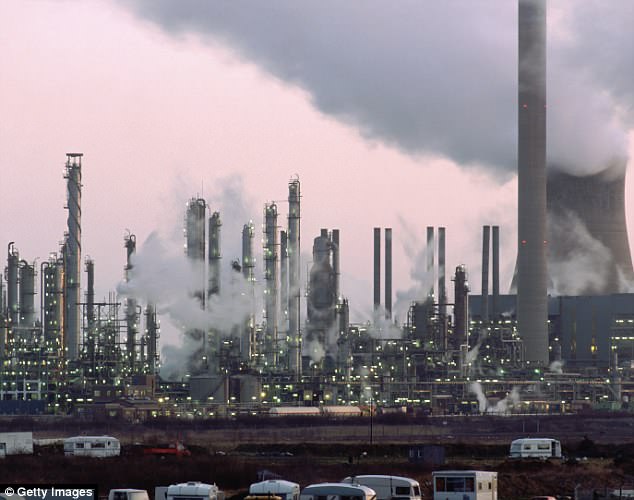 Industry: Around 7 per cent of the UK’s steel output, 350,000 tonnes, was exported to the US last year