The rescue of a soccer team from a cave in Thailand in 2018 captivated the world. Now it’s the subject of a Ron Howard film Thirteen Lives.

The plight of the “Wild Boars” commanded international attention soon after they were found by two British divers nine days after they vanished in the Tham Luang cave. 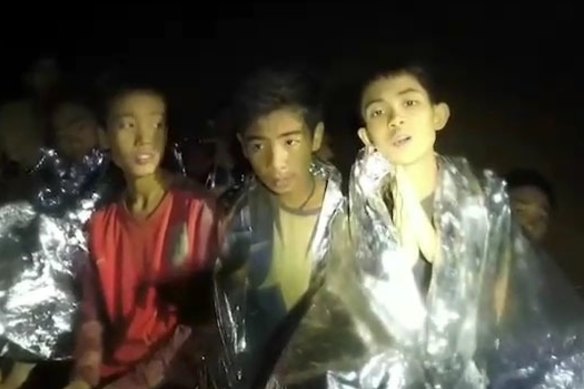 The team’s coach taught the boys in the cave how to meditate so they could conserve energy. This image is taken from a Thai Navy SEAL video.

The Sydney Morning Herald’s and The Age’s then-South-East Asia correspondent James Massola, who later wrote a book about the rescue, was on the scene with photographer Kate Geraghty.

Readers can compare for themselves how the details were reported at the time with their depiction in the film.

Contributions by the team made up of Thai Navy SEALs and British and Australians divers added to the international flavour of the rescue. Among the Australians, Richard Harris, an anaesthetist from Adelaide, played a key role in the delicate operation. (A graphic shows the length and depth of the cave complex.) 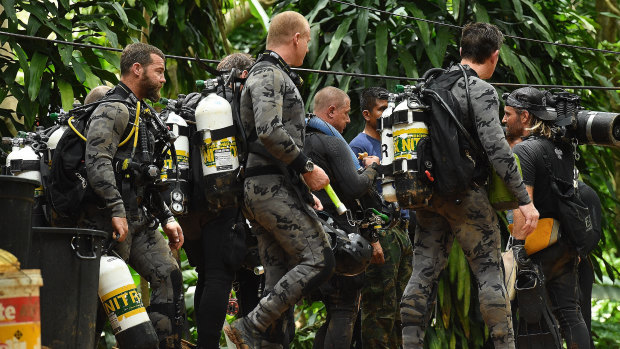 Members of the Australian dive team walk down the track that leads to the cave entrance where the rescue operations are being planned for the 12 boys and their soccer coach who have been trapped inside Tham Luang cave.Credit:Kate Geraghty

Massola reported on the moment the pumps holding floodwaters from entering the cave failed, just hours after the last of the boys were freed, forcing more than 100 rescuers to flee the cave complex while they were celebrating.

The rescue effort took place in a region of northern Thailand, bordering on Myanmar and Laos, which has complex culture and beliefs.

One of northern Thailand’s most revered monks visited the cave complex while families waited for news. Known to locals as the Tham Luang Nang Non or the great cave of the sleeping lady, it features a shrine to the princess of Sipsongpanna at its entrance.

The Sydney Morning Herald and The Age were on hand for the dramatic conclusion to the herculean effort to save the boys and their coach.

As Massola wrote at the time: the miraculous story of the Tham Luang cave belongs to no one, and to all of us. And that, most likely, is why it stopped the world.