The discovery of the bodies was another reminder of the task facing Mexican President Andres Manuel Lopez Obrador, who took office in December vowing to reduce the gang-fueled violence that produced nearly 29,000 murders in the country last year – a record.

Gerardo Octavio Solis, attorney general of Jalisco, Guadalajara’s home state, said 27 bodies were found buried at a property in the Zapopan area of the city during investigations undertaken over the past week. Work was continuing, he added.

‘We’re digging more than three meters (10 ft) down,’ Solis told a news conference with state governor Enrique Alfaro and others. 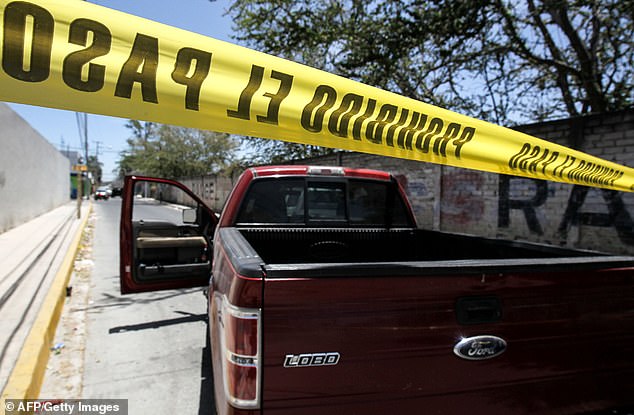 Mexican investigators have unearthed 35 bodies buried around the metropolitan area of Guadalajara, the country’s second-largest city. Officials  are seen near one clandestine grave site at a farm in Zapopan where 27 of the corpses were discovered over the past week

Another seven human skulls were found in a separate clandestine grave in the city, where investigations were also ongoing.

An additional body was recovered from the Tlajomulco municipality in the southwest of Guadalajara, Solis added.

Solis described the discovery of the graves as a blow to local organized crime, and said four suspects had been arrested.

It was unclear how long the bodies had been buried.

The state is home to one of Mexico’s most powerful drug gangs, the Jalisco New Generation Cartel, and has suffered from the turf wars that have convulsed much of the country. 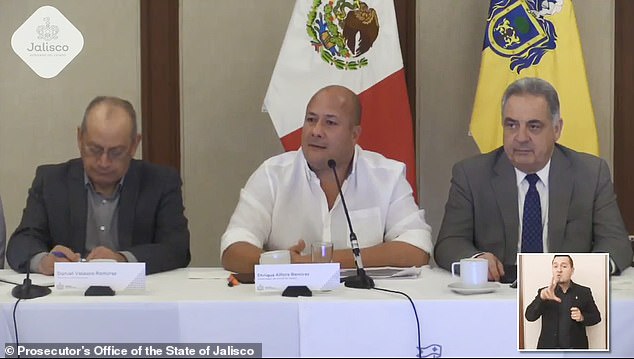 Enrique Alfaro, Governor of the State of Jalisco, is seen at a press conference on Saturday. The state in western Mexico has been plagued by drug violence over the past decade

Lopez Obrador says he is containing the problem, but homicides in the first four months of his government exceeded the levels registered a year earlier, official data showed.

Just last month, a suspect with ties to a criminal organization led Mexican authorities to another gang’s secret grave site where dozens of their victims were discovered.

The Jalisco New Generation Drug Cartel – Cártel de Jalisco Nueva Generación in Spanish – is considered to be the most powerful drug cartel in Mexico.

The criminal group has been active since 2009 and is based in the western state of Jalisco, also operating in the states of Nayarit, Colima and Guanajuato.

It is headed by Nemesio Oseguera Cervantes, aka ‘El Mencho, one of Mexico’s most-wanted drug lords.

The cartel member, who has not been identified, tipped off police to the desolate area in Veracruz – a Mexican state which has been ravaged by gang violence in recent years.

The site has at least 36 different ‘graves’ – each of which can contain multiple people.

None of the bodies have been identified yet. But there are over 40,180 missing persons reported in Mexico, according to a January report released by the National Commission for the Search of Missing Persons.

Another mass grave was discovered in the northwestern state of Sonora in April.

The volunteer group called ‘Guerreras Buscadoras (Warrior Searchers) came across 27 sets of body parts  with the assistance of forensics experts that canvassed the grounds of the Yaqui Valley, a rural city where two criminal gangs have been embroiled in an ongoing turf war.