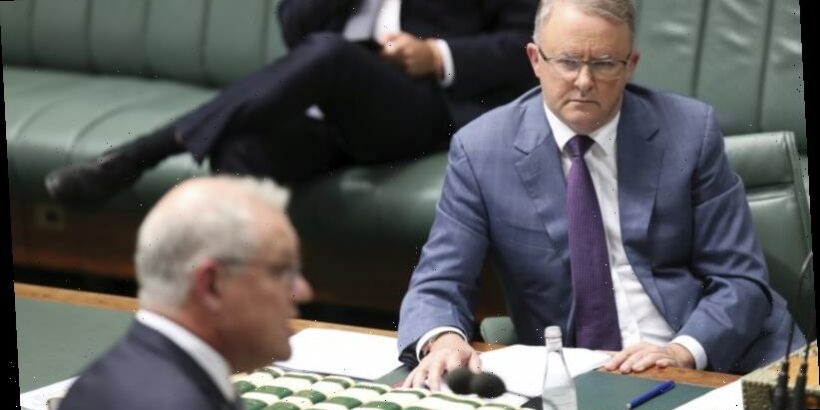 In the immortal scene from Crocodile Dundee, a New York mugger pulls out a switchblade and threatens Mick Dundee. His lady companion urges him to hand it over. Why, asks Dundee. Because, she points out, he’s got a knife. “That’s not a knife,” Dundee rejoins as he whips out a large, gleaming bowie knife. “THAT’s a knife”. The mugger runs off.

In the contemporary political analogy, Scott Morrison produced a small, inoffensive butter knife against Anthony Albanese and the union movement. Labor has now whipped out a whopping hunting knife in reply. 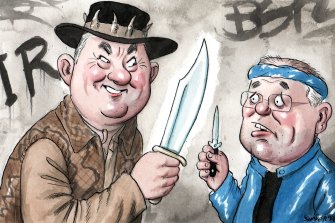 In the contemporary political analogy, Scott Morrison produced a small, inoffensive butter knife against Anthony Albanese and the union movement. Labor has now whipped out a whopping hunting knife in reply.Credit:Illustration: John Shakespeare

The Morrison government is proposing a series of minor changes to workplace laws. The most contentious is that a company hit hard by COVID-19 would be able to make changes that violate the better-off-overall test for its workers. The better-off-overall test, or BOOT, is the test that the Fair Work Commission applies to employer efforts to change their enterprise agreements. Will workers be better off overall as a result of any changes?

Under the government proposal, a company would have to convince the Fair Work Commission that the changes were necessary for it to stay afloat. And a critical point – any such changes would be limited to a maximum of two years’ duration. That’s the Morrison butterknife.

The Labor hunting knife in reply? A full-throated political and industrial campaign that will run all the way to election day, with Albanese denouncing the proposal – “this is what a pay cut looks like” – and ACTU secretary Sally McManus hyperventilating over a “dangerous and extreme” proposal. 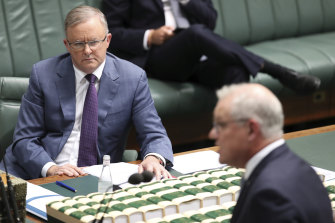 Albanese desperately needs a fight. After a year as a responsible and constructive Opposition Leader helping the Morrison government manage the pandemic, he was almost invisible.Credit:Alex Ellinghausen

Morrison’s Minister for Industrial Relations, Christian Porter, labels this as “a bit of an outrage industry”. He’s right. It’s otherwise known as politics. Much as the Coalition whips up its own outrage against Labor when it suits. You can make your own list, but one of the silliest was Morrison’s mock shock claim in the 2019 election campaign that Labor’s electric vehicle policy was going to “end the weekend”.

Porter’s effort at dismissing the Labor reaction is really just an admission of vulnerability. McManus has raised the spectre of Liberal routs past: “It’s the worst since WorkChoices,” she gloated, sending a shiver down the spine of every Liberal old enough to remember how Labor’s anti-WorkChoices campaign helped defeat their greatest living general, John Howard. McManus will be ramming home the point at every opportunity, starting on the ABC’s Insiders show on Sunday.

Porter’s “outrage machine” comment is the equivalent of the mugger’s panicked expletive as he runs off in fear of Dundee’s blade: “Shit.” This is a fight that Morrison cannot win. Recall that the voters’ perception of the Coalition is that it is untrustworthy on anything to do with workers’ rights.

Worse, the proposal as it stands won’t even get through the Parliament. It is destined to die in the Senate, where it’ll be voted down by Labor and the crossbench. Porter himself has conceded he’ll need to make changes to the so-called “omnibus” bill to have any hope of getting any of its measures into law.

The scare campaign has been taken up independently by two unions, the CFMMEU and ETU, with the sensitivity and good taste that we’ve come to expect from the CFMMEU. They’ve produced an ad with Scott Morrison as a bus driver. A group of apprehensive workers stand on the road in front of him. Morrison accelerates the bus, aiming directly at the group. Using COVID-19 as an excuse, intones the voiceover, Morrison’s “omnibus bill will hurt Australian workers”. The workers brace for impact. The screen goes black as tyres screech.

Porter described the “stop the bus” ad as “disgusting” and insensitive to anyone who’s ever lost loved ones in a road accident. It’s hard to disagree. The CFMMEU is no friend of Albanese; it didn’t consult the Labor leader about the ad. But it illustrates how fast and loose the campaign against the government can be expected to be played.

Worse yet for the government is that Albanese not only took the opportunity to denounce the Coalition but to introduce a contrast – by launching part one of Labor’s workplace policy this week. In a speech in Queensland, the Labor leader set out what he described as the first eight elements of Labor’s Secure Australian Jobs Plan.

They are, in his words: “Job security” explicitly inserted into the Fair Work Act; rights for gig economy workers through the Fair Work Commission; portable entitlements for workers in insecure industries; casual work properly defined in law; a crackdown on cowboy labour-hire firms to guarantee the same job, same pay; a cap on back-to-back short-term contracts for the same role; more secure public sector jobs by ending inappropriate temporary contracts; and government contracts to companies and organisations that offer secure work for their employees. All of which he wrapped up in Labor’s slogan for the forthcoming election: “Labor is on your side.” 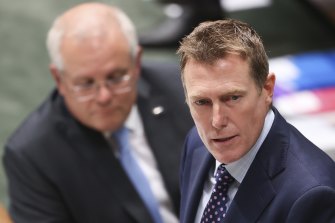 Porter leapt on one of these proposals as the basis for his own scare campaign. It was Labor’s proposal for workers in insecure jobs – that they should be able to take their entitlements such as accumulated sick leave or holiday leave from one job to the next. Porter claimed this would cost employers $20 billion a year.

This portability of entitlements already happens in the construction sector, where it’s funded by a levy on employers averaging 2.7 per cent. This demonstrates that, first, it can actually work, and second, it does actually come at a cost to employers. But Albanese had merely said Labor would consult with states, unions and employers on how and where such a scheme might be appropriate. He deliberately kept it so vague that it’s impossible to put a cost on it. So the $20 billion scare is just that.

Albanese needed a fight. Desperately. After a year as a responsible and constructive opposition leader helping the government manage the pandemic, he was almost invisible. His tremble-kneed troops were getting jittery. He needed to be able to fight the government, to differentiate himself politically, and to rally his side in a common cause. And for Labor and the unions, there is nothing as unifying as industrial relations.

Morrison started the fight; his omnibus bill will be in the Parliament in the next few weeks. Albanese intends to finish it. Even when the better-off-overall test proposal is defeated, Labor will continue to argue that the government showed its true intention towards workers – “they don’t want you to be better off”.

Labor will stitch this together with other government moves to create a narrative of a callous Prime Minister who wants to strip away benefits from the people who need it most. The Labor chant will run something like this: Morrison wants to give you cuts to JobSeeker, cuts to JobKeeper, cuts to wages (through the BOOT proposal), and cuts to super.

Note that the government’s current position is not to cut super but to proceed with the legislated increase in the super guarantee levy from the current 9.5 to 12 per cent. But a noisy campaign from the Liberal backbench to cancel the increase gives Labor enough to work with, claiming it shows the government’s true intent.

The government has missed a tremendous opportunity in all of this. Morrison’s management of the pandemic has been successful overall. It’s transformed his image and improved Australia’s standing in the world. The percentage of Australians who say they trust the federal government has doubled from 27 per cent to 54 per cent in the past 12 months, according to an ANU survey released this week. The government’s competence was a “massive shot in the arms for the government and the Prime Minister”, according to Nicholas Biddle, the ANU academic who commissioned the survey.

Morrison had an opportunity to extend this political transformation. He’s now seen as an effective crisis manager. He might have been able to enlarge his image as someone who actually cares about his fellow Australians, not just Coalition voters.

After all, it was the federal government that provided almost all the material support to get the country through the savage economic downturn. The Morrison government created JobKeeper, increased JobSeeker, made extra payments to pensioners, made childcare free during the worst months, and orchestrated the bank freeze on mortgage repayments for people in difficulty. With the right handling, this had potential for Morrison to capitalise as a father-of-the-nations figure.

Instead, he’s now being set up as a cruel bastard who just wants to attack workers and the vulnerable.

At Bob Hawke’s funeral in 2019, Kim Beazley quoted the former prime minister as saying: “The essence of power is the knowledge that what you do is going to have an effect – not just immediate, but perhaps lifelong on the happiness and wellbeing of millions of people, so I think the essence of power is to be conscious of what it can mean for others.” It was a great political strength, said Beazley, that “whether you agreed or not, your happiness was his motive. He could afford risk-taking in leadership.” Because he was so trusted.

Morrison has built trust in the crisis, and had the opportunity to enlarge and extend that trust. Instead he has given Labor a prime opportunity to undermine it, to convince voters that your happiness is not his motive. It means he will be less able to afford risk-taking in leadership, not more. He needlessly started a knife fight he cannot win. Albanese has made the first slash but, of course, Morrison’s not dead yet. He’ll try to move the fight to other ground, with other weapons.

After Mick Dundee wrestled a crocodile and sank his knife into its skull, his frightened lady friend asked if it was dead. Replied Dundee: “Well, if it isn’t, it’ll be a helluva job skinning the bastard.”

Our Morning Edition newsletter is a curated guide to the most important and interesting stories, analysis and insights. Sign up to The Sydney Morning Herald‘s newsletter here, The Age‘s here, Brisbane Times’ here, and WAtoday’s here.