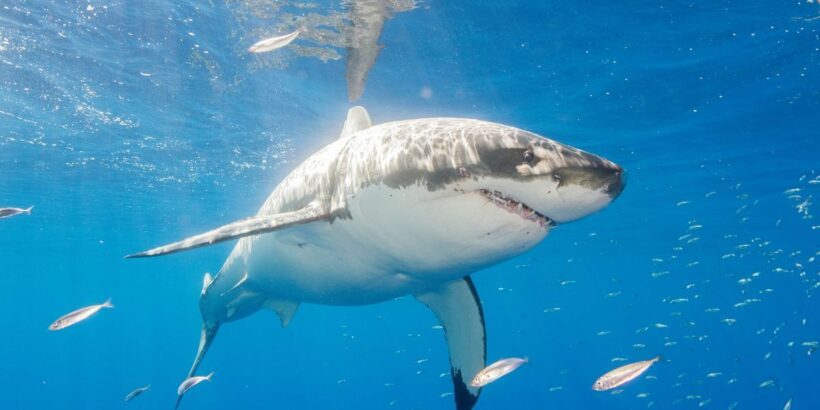 Former surfing champion and Stradbroke Island local Russell Specht recalled his nephew’s close miss with the beast. He has urged tourists of the Queensland, Australia, beach to be careful of the hidden dangers as thousands of whales migrate to the east coast.

He said his lifeguard nephew Logan had a “really close call” while surfing and posted an aerial photo of the shark.

In an Instagram post, Mr Specht wrote: “He had to put the board between him and a big white.

“He thought it was over.

“I had to post something as too many tourists just have no idea.”

The Queensland local also advised beachgoers where it is safer to enjoy days in the sun.

He continued: “There’s no netting on the island.

“We’ve got drum lines, I think.

“Cylinder Beach is probably the safest one to swim at.”

The annual whale migration began last weekend near the famed beach in Queensland.

Every year whales travel to warmer waters along the east coast of the nation between June and August to mate.

This brings large numbers of sharks to the area.

Mr Specht captured a sobering image of the ferocious shark and posted it on his instagram.

He wrote: “Hi just to let a few crew know these guys follow the whales. This was Saturday with about 30 crew in the water at Frenchman’s.”