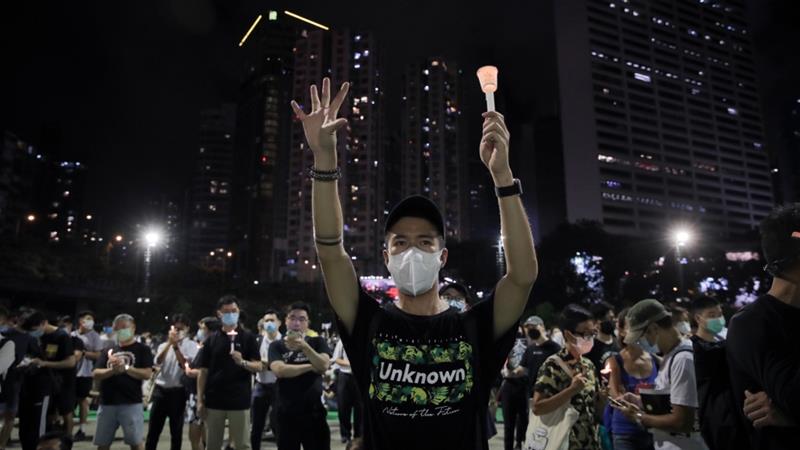 Flames from candles illuminated the streets and parks of Hong Kong as tens of thousands of people defied coronavirus restrictions on gatherings to commemorate China’s Tiananmen Square massacre.

The annual vigil carried a new weight on Thursday as participants not only commemorated the hundreds, by some accounts thousands, of members of a pro-democracy student movement massacred by Chinese forces in Beijing on June 4, 1989, but also looked ahead to a new national security law that critics say threatens the civil liberties of Hong Kong’s residents.

Despite coronavirus pandemic restrictions that prohibit gatherings of more than eight people, Hong Kong police did not move to suspend a main vigil in Victoria Park.

No clashes were reported there but police fired tear gas and made several arrests during scuffles that broke out in the working-class Mong Kok district, where demonstrators tried to set up roadblocks. Pockets of protesters also fanned out throughout several shopping districts.

Meanwhile, several thousand people, many clad in black, joined the rally in Victoria Park after breaking through barriers that sealed off the area. They held signs and chanted slogans like “liberate Hong Kong, revolution of our time” and “fight for freedom, stand with Hong Kong”.

Critics say the law would smother the civil liberties Hong Kong residents enjoy under the “one country, two systems” agreement put in place when the United Kingdom handed the territory back to China in 1997. The agreement is set to end in 2047. 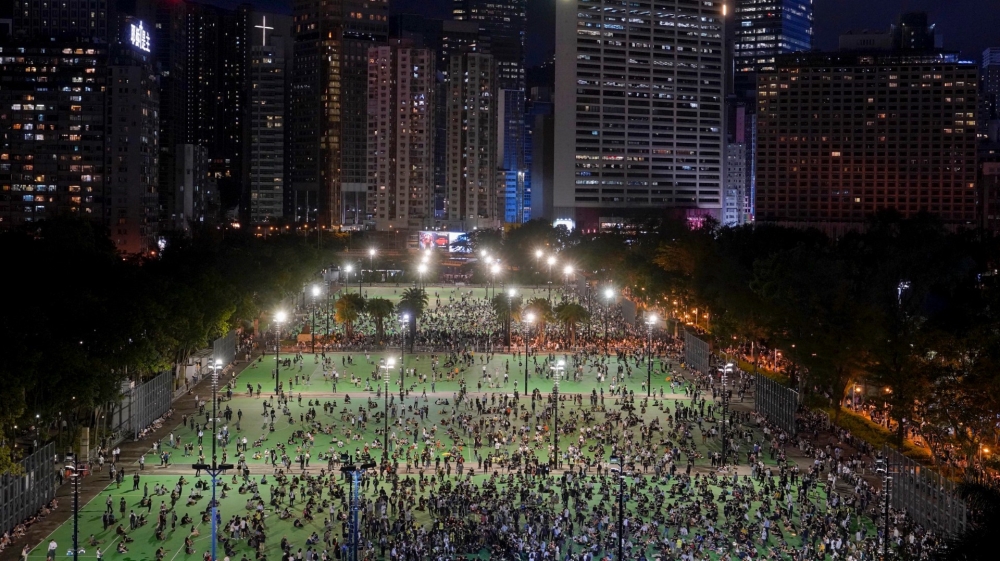 Reporting from Victoria Park on Thursday, Al Jazeera’s Sarah Clarke said there was a pervasive sense of worry from vigil organisers and pro-democracy attendees that the new legislation could spell the end for “gatherings like this”.

“China is going to introduce those laws, and potentially target political dissidents or those people who speak out against the mainland,” she said.

Despite what critics have described as threats to Hong Kong’s autonomy, the vigil on Thursday was “a very powerful symbol” that the spirit of the territory’s people remained intact, Anthony Dapiran, a lawyer and author, told Al Jazeera.

“Tonight has been a remarkable symbol that the Hong Kong people are still very passionate about democracy in their city, full of a fighting spirit, and I think we’re going to see them continue coming out to protest in support of their beliefs,” he said.

In Victoria Park, a 73-year-old man who only gave his surname, Yip, told AFP news agency: “I’ve come here for the vigil for 30 years in memory of the victims of the June 4 crackdown, but this year it is more significant to me.”

He added: “Because Hong Kong is experiencing the same kind of repression from the same regime, just like what happened in Beijing.”

Despite the coronavirus restrictions, 70-year-old housewife Kitty told Reuters News Agency she was not deterred.

“We are just remembering those who died on June 4, the students who were killed. What have we done wrong? For 30 years we have come here peacefully and reasonably, once it’s over it’s ‘sayonara’ (goodbye),” she said.

The United States and Taiwan have issued statements calling on China to atone for the deadly 1989 crackdown, for which China has never provided a full account.

China’s foreign ministry said the calls for an apology were “complete nonsense”.

“The great achievements since the founding of new China over the past 70 or so years fully demonstrates that the developmental path China has chosen is completely correct,” spokesman Zhao Lijian told reporters.

In mainland China, authorities do not allow any open discussion about the incident and censors scrub any mention of it off the internet.

In rare comments last year, China’s Defence Minister Wei Fenghe said the 1989 protests were “political turmoil that the central government needed to quell, which was the correct policy”.

“Due to this, China has enjoyed stability, and if you visit China you can understand that part of history,” he said.

Meanwhile, amid days of protests in the US over police violence against Black citizens, Secretary of State Mike Pompeo on Wednesday tweeted a photo of him meeting prominent Tiananmen survivors.

Taiwan’s President Tsai Ing-wen tweeted: “Around the world, there are 365 days in a year. Yet in China, one of those days is purposely forgotten each year.”

Around the world, there are 365 days in a year. Yet in China, one of those days is purposely forgotten each year. In Taiwan, there were once days missing from our calendar, but we’ve worked to bring them to light. I hope one day China can say the same.