Denver: A largely unchecked Colorado wildfire nearly doubled in size overnight, prompting a fresh round of evacuations, with the blaze expected to grow in size as it is fueled by bone-dry conditions and pushed by gusting winds, officials said. 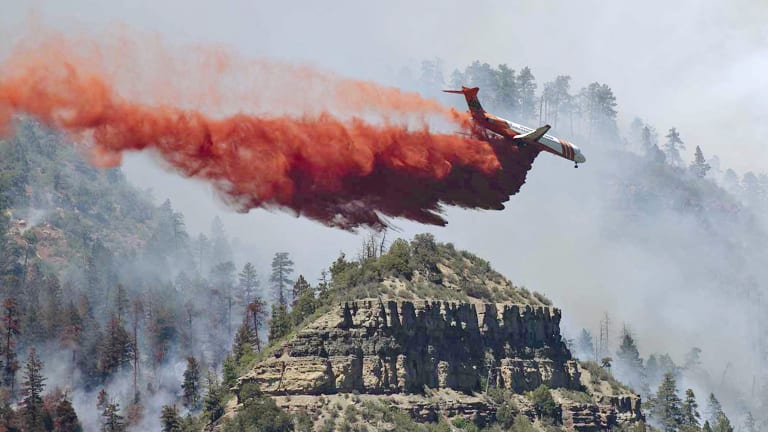 An aircraft drops fire retardant on the fire in the mountains near Durango, Colorado. Fires in the south-west of the state continue to burn largely out of control.

The so-called 416 Fire in south-west Colorado had burned nearly 6880 hectares by Sunday afternoon, an area larger than Manhattan. More than 800 firefighters were battling the blaze located north of Durango, which was 10 per cent contained, the Rocky Mountain Incident Management Team said.

The fire had burned about 3640 hectares by early on Saturday, according to an aerial survey.

A mandatory evacuation order was issued on Sunday for 859 residences, bringing the total number of homes under evacuation to about 2000, La Plata County, Colorado, spokeswoman Megan Graham said.

Law enforcement officials were going door to door and residents have been warned to leave via calls to their phones, text message and emails.

No structures have been destroyed so far, but the fire was within a few hundred metres from homes with multiple aircraft dropping water and flame retardant to curtail the blaze.

"The terrain is rough and inaccessible in many areas," the report said, adding June 30 is the estimated date for containment.

Low humidity and high winds have left firefighters bracing for the fire to spread and the weather was expected to be dry and windy on Sunday.

The National Weather Service has placed large portions of the so-called "Four Corners" region of Utah, Colorado, New Mexico and Arizona under a red flag warning of extreme fire danger due to the dry conditions.