Tens of thousands of people descended on cities from coast-to-coast on Saturday in "Families Belong Together" rallies to protest the Trump administration's "zero tolerance" immigration policy that left more than 2,000 children separated from their parents at the US-Mexico border.

In the nation's capital, thousands poured into Lafayette Square, across from the White House, to chant "We care" and "No Trump, No KKK, No Fascist USA." 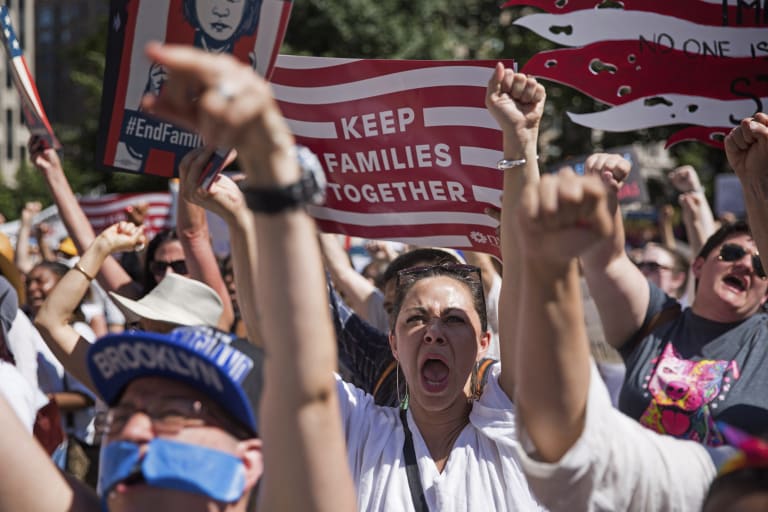 Activists at a protest in New York on Saturday.

Protesters waved signs in English and Spanish. The slogan on one English sign demanded, "Where are the children?"

One sign, sounding like a mother's stern rebuke, read in Spanish, "Trump te calmas o te calmo." Translation: "Calm down, Trump, or I will calm you down."

While President Donald Trump and first lady Melania Trump avoided the chants in Washington, the protests followed them to their weekend retreat in Bedminster, New Jersey.

Only about six kilometres from Trump National Golf Course, more than 100 protesters lined the side of a major New Jersey highway waving anti-Trump signs and chanting, "Where are the children!" 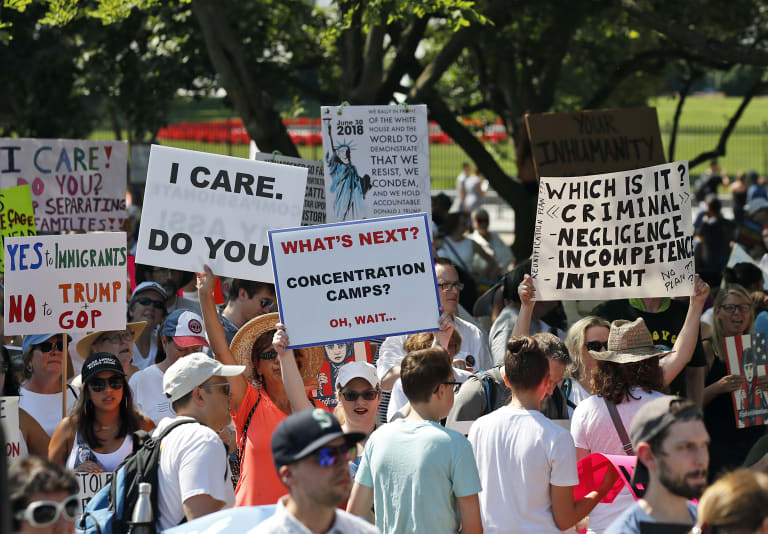 Protests were held in states nationwide.

In Washington, Shelley Kohl, a retired business owner from Johnson City, Tennessee, said she does not usually engage in politics, but the images of children being separated from their parents motivated her to travel to Washington for today's protests.

In Atlanta, Rep. John Lewis, the civil rights icon who once marched with the Rev. Martin Luther King, roused the crowd with by imploring the protesters: "Don't give up, don't give in – keep marching."

"Maybe our foremothers and forefathers all came to this land in different ships, but we are all in the same boat now," he said.

He also emphasised the political underpinning of the nationwide rallies, calling on demonstrators to make their voices heard in November.

"We've got to get out and vote like we never voted before," he said, prompting chants from the crowd," Vote! Vote! Vote!"

In New York City, protesters at a Manhattan park chanted "shame!" and "shut detention down" as they geared up to march across the Brooklyn bridge to Cadman Plaza, near the federal courthouse.

Episcopalian Chaplain Jenifer Gamber, 52, said she hoped to send a strong signal to elected officials about the public's opinions on immigration.

"I am appalled at the Trump administration's treatment of people seeking asylum in the United States that criminalises asylum-seeking and separates families," Gamber said.

Each state is hosting at least one event, with some states, such as Texas and Massachusetts, participating some 30 events. California was on track to host at least 80 on Saturday, according to the Families Belong Together website.