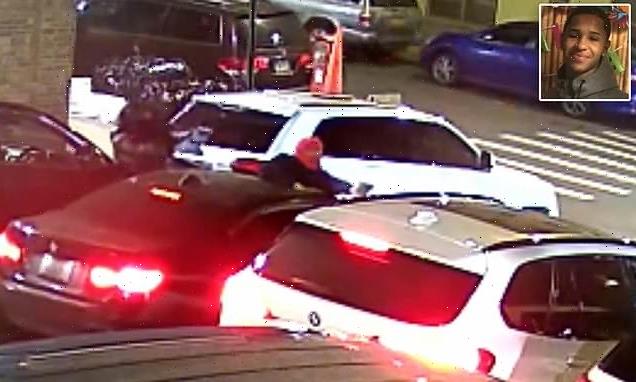 A Bronx man was shot in the head and killed and his 18-year-old girlfriend was injured in their white BMW after three masked men pulled up beside them and fired multiple times at the couple.

Horrific footage shows the moment the men pull up in their black BMW sedan beside Sergio Jimenez, 21, on Sunday night in the Bronx, with one of the killers sticking his body out of the car’s sunroof armed with a gun.

Another man fires from the back seat while a third gunman leaps out of the car to begin shooting at the couple.

The third gunman appears to have trouble reloading his gun after firing multiple shots, giving up and getting back into the car before all three of them drove off.

EMS pronounced Jimenez, the father of a three-year-old boy, dead, and his girlfriend was taken to BronxCare Health System to be treated for gunshot wounds to her hand and back. She was listed in stable condition. 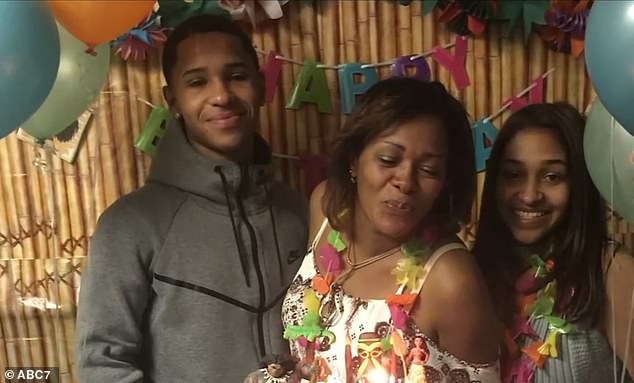 Sergio Jimenez, 21, (left) was shot in the head and killed inside his BMW on Sunday night. He is pictured with family during a birthday party 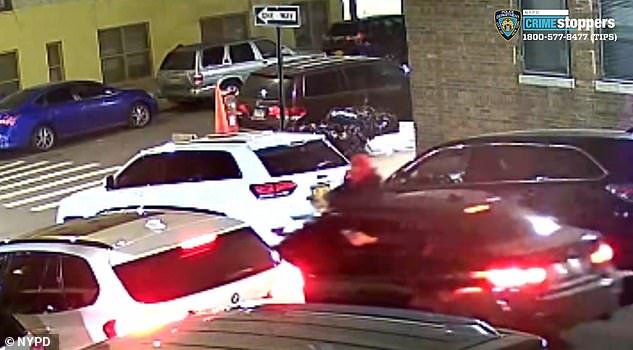 Sergio Jimenez, 21, was parked in his white BMW with his girlfriend, 18, when masked men in a black BMW pulled up beside them and opened fire on 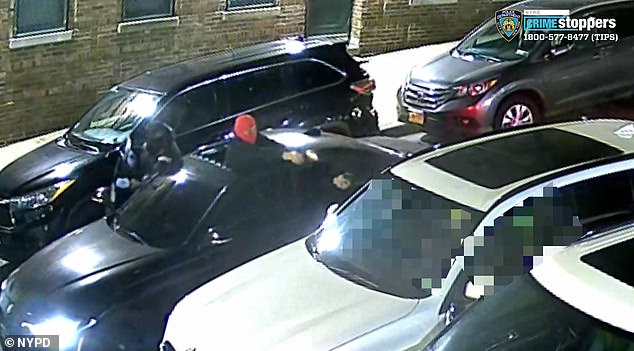 The masked men fired multiple times, shooting Jimenez in the back of the head and his girlfriend in her hand and back 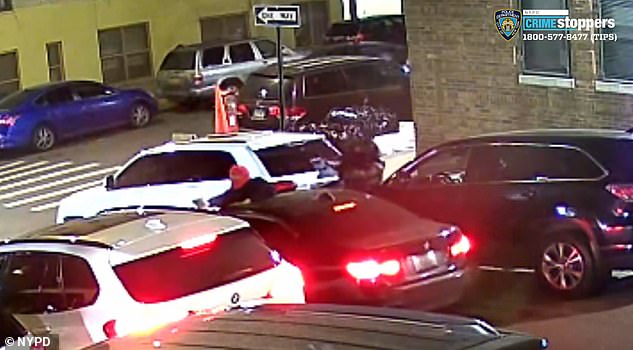 After the shooting, Jimenez lost control of the BMW, which rolled down a hill and struck parked vehicles, ABC reported.

Police and first responders arrived at the scene moments later after Jimenez’s girlfriend flagged down a passersby for help.

The suspects were last seen driving westbound on East 172 Street as police continue to investigate the deadly shooting. No arrests have been made.

Jimenez’s father, also named Sergio, told the New York Daily News he suspected the killers were neighborhood rivals who had thrown a brick at the family’s home recently.

‘He knew he was being threatened,’ the father said. ‘And they knew where he lived. The threats were to such an extent that he wanted to change apartments.’

The mourning dad added that his son was preparing to go to college.

‘My only son,’ Jimenez’s father anguished. ‘How can I explain how I feel? I spoke to him 15 minutes before it happened and we just talked about how we were doing. And 15 minutes later, they called me with the news.’

The New York Police Department said Jimenez has previous arrests records and was wanted for a 2020 misdemeanor assault. The wounded passenger has no criminal record.

First responders found Jimenez armed with a gun in the pocket of his hoodie, NY Daily News reported. 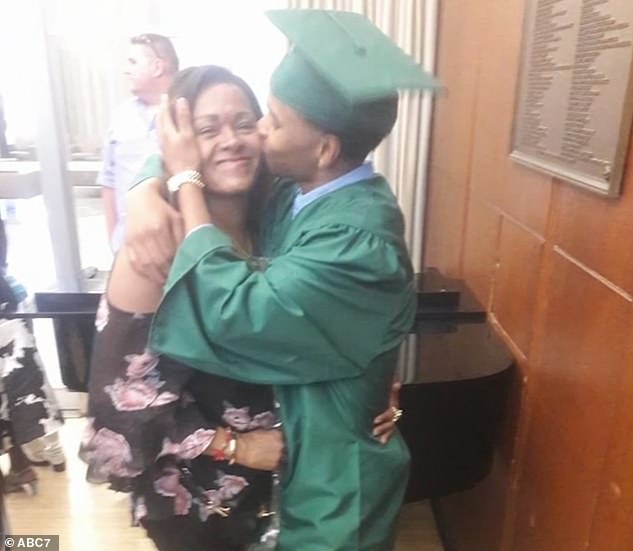 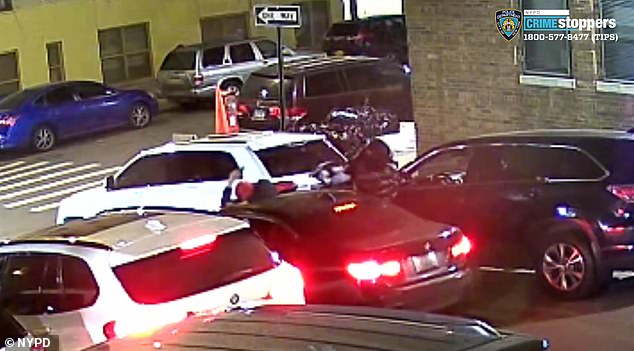 After firing multiple shots, the masked men fled the scene. Jimenez lost control of his vehicle, which rolled down the hill and struck parked cars

It was the second shooting to take place in the Bronx on Sunday after Robert Brown, 62, was shot and killed in broad daylight while sitting on a bench in Aqueduct Walk, a park in University Heights.

Police said two men were trying to rob the victim when they shot him in the head. Brown was taken to St. Barnabas Hospital, where he was pronounced dead.

No arrests have been made for this case either.

Violent crime has been on the rise in New York City with the the New York Police Department reporting 1,761 shooting victims so far this year, eight more than last year. 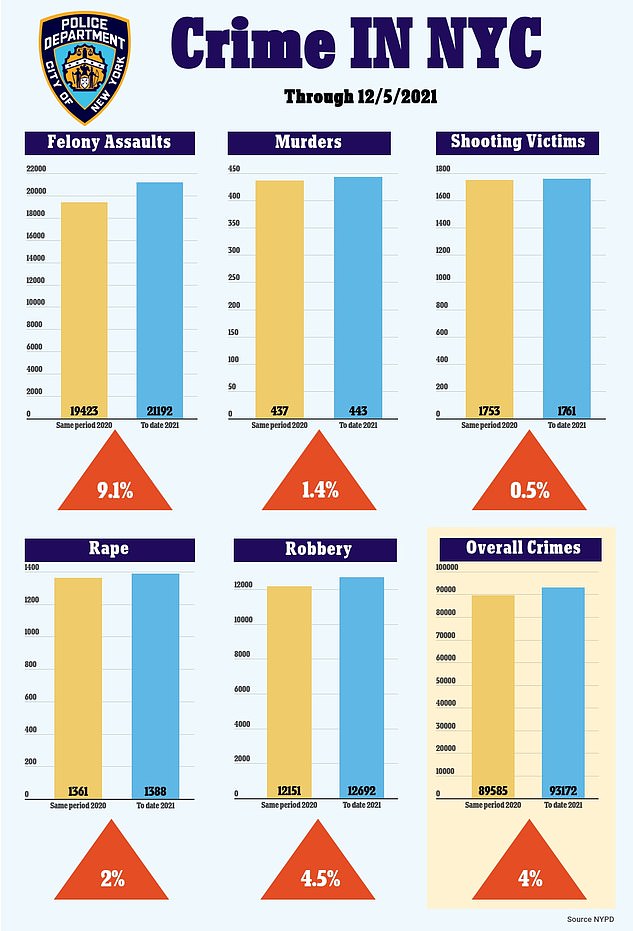 Among the recent streak of crimes in the Big Apple includes two assaults by a homeless man with an extensive criminal record and an assault case pending against him.

Darrell Johnson, 28, was arrested last week for allegedly attacking two women at random just minutes apart, leaving one of them with ‘disfiguring’ injuries, only to be released from jail under the state’s controversial bail reform laws.

Johnson was charged with two misdemeanor counts of assault with intent to cause physical injury and multiple attempted assault and harassment charges.

The career criminal also faces additional assault, attempted assault and harassment charges pending against him stemming from an incident in August 2020 during which he allegedly punched and stomped on a man in Harlem.

Despite the slew of new and old charges against him, and his lengthy rap sheet listing at least 15 prior arrests, a Manhattan judge on Friday agreed to free Johnson without bail pending trial.

Johnson is due back in court on February 1, 2022, reported West Side Rag. 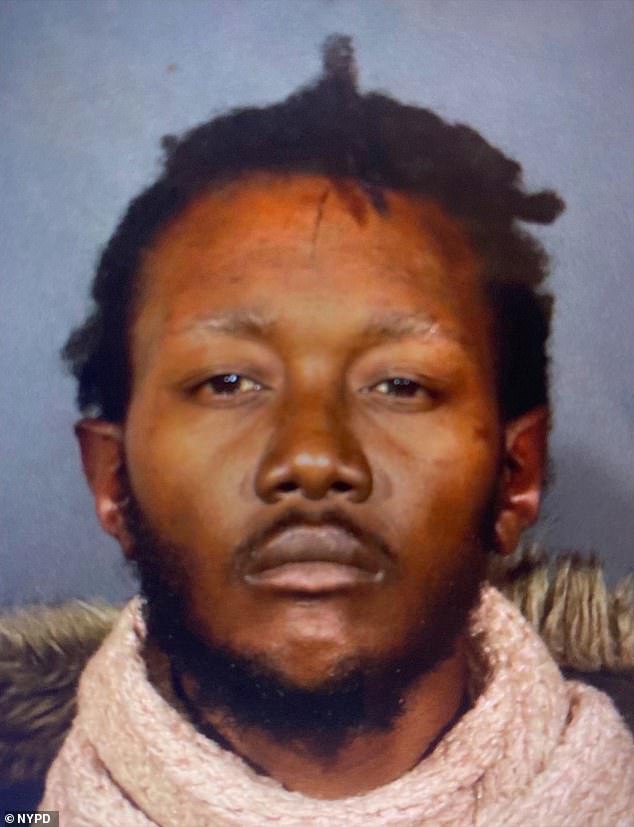 Serial offender Darrell Johnson, 28, has been charged with two misdemeanor counts of assault with intent to cause physical injury, and attempted assault and harassment counts for allegedly attacking two women in Manhattan last week 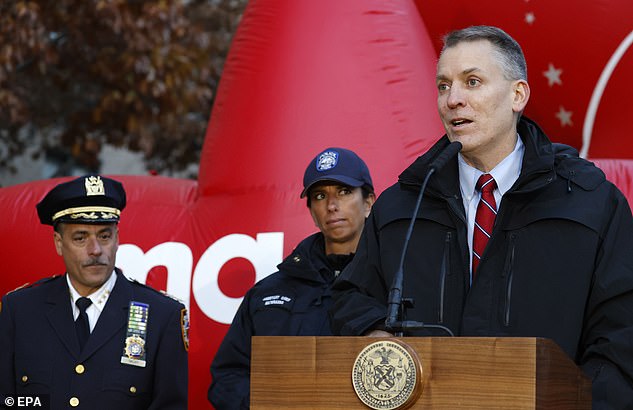 Under former Governor Andrew Cuomo’s controversial reform laws passed last year, bail can no longer be imposed on misdemeanors and non-violent felonies, even as New York City continues to be gripped by a crime wave, with murder, assault, rape and robbery rates all on the rise.

Back in August, New York Police Department Commissioner Dermot Shea begged Gov. Kathy Hochul, who took over for Cuomo after his resignation over sexual misconduct allegations, to undo her predecessor’s crime reform laws, calling the ‘soft-on-crime experiment’ a failure that has led to the city’s runaway crime.

‘This city is built on public safety,’ Shea told NY1. ‘We’re probably about two years into this soft-on-criminals experiment. … Show me a New Yorker that thinks this experiment has worked.