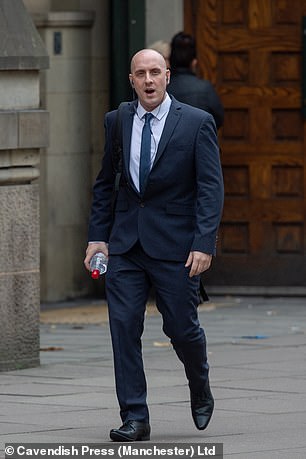 A thug who beat a man senseless and left him with amnesia following an argument about noise has walked free after claiming he suffers from a severe form of shyness, a court heard.

Matthew Simpson punched Gary Smith in the face during a dispute over the victim’s friend, Michelle Partington, playing loud music from her flat.

Mr Smith was knocked over by the force of the blow and hit his head on a parked car. He was left unconscious and spent a month in hospital with skull fractures and a bleed on the brain.

The victim has since suffered with anxiety and memory problems while Simpson, 37, has moved back in with his parents following an assessment with a psychiatrist who deemed he had a severe form of shyness.

After the incident, Simpson, from Stockport, Greater Manchester saw a psychiatrist who said he suffered a ‘social phobia with a panic disorder’ – which the NHS says is a long-lasting and overwhelming fear of ‘social situations. ‘

At Minshull Street Crown Court, Manchester,  Simpson admitted causing grievous bodily harm but walked free with a suspended jail term after a judge said the contents of psychiatric report meant he could be ‘rehabilitated’.

The incident occurred on December 10, 2016 after Simpson had repeatedly clashed with his neighbour Miss Partington, over the level of noise coming from her flat below his upstairs apartment.

Prosecuting, Simon Barratt, said: ‘He didn’t get on very well with her and it’s accepted that numerous complaints were made by them to the police and the housing association. Gary Smith, knew Michelle Partington and visited the flat on that day. 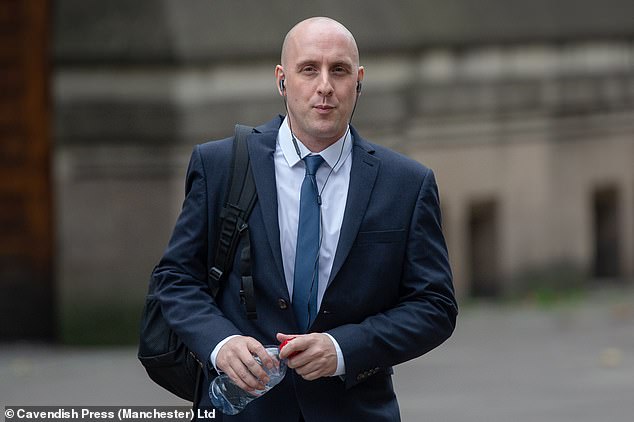 ‘On December 10, 2016, they were drinking together at her flat. They were playing music and the defendant, who had been drinking, became angry and started banging on the door. Just after 1am, Michelle Partington and Gary Smith were standing outside their flat when the defendant came over and confronted him, aggressive and agitated. 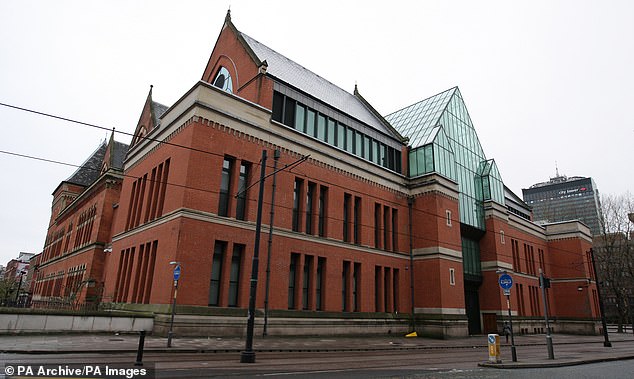 ‘The complainant sustained serious injuries and he was taken to hospital. He suffered skull fractures and bruises and bleeding on his brain. He was confused and unable to co-operate and was diagnosed with Post-Traumatic Amnesia.’

In a statement, Mr Smith said: ‘I suffer from memory problems, I didn’t even recognise my manager or my place of work at first. I suffer with anxiety and I am frightened of my surroundings and what might happen to me. I suffer flashbacks to the incident which affects my sleep, and I am on medication for this.

‘My doctor told me that I can’t drink alcohol anymore. I continue to have ongoing check-ups and I suffer from depression – I am not my old self anymore.’

In mitigation defence lawyer Louise Cowen, said: ‘This is a serious offence but it could have been more serious. He accepts that he was responsible and that he caused the terrible injuries to the victim.

‘He is truly sorry that he caused these injuries and he has expressed his remorse. But, I will say he is not a violent individual. It was a single blow, there was no intention to cause the harm that he did, and, in context, this is part of a long standing dispute between neighbours in which Gary Smith unfortunately got involved.

‘A psychiatric report has been done and he has been registered as having a social phobia with a panic disorder. I submit that this mental health issue puts him into the lower culpability.

‘He has been assessed by probation as at a low risk of reoffending or harming others. He is currently living with his parents and has no intention of returning to his old flat.’

Sentencing Simpson to a two-year jail term suspended for two years, Judge Bernadette Baxter said: ‘You were involved in a long running dispute with your neighbour, of which you were as much an active part, and you lost your temper because they were playing their music too loudly.

‘You must have known going outside would have caused trouble, and trouble is exactly what you caused. You went out and Gary Smith tried to calm you down and you hit him in the face.

‘I have no doubt that you didn’t intend to cause the injuries that you did, but he did suffer a significant bleed on the brain. Everybody has to deal with neighbour disputes, but they do not resort to violence.

‘Many would say that you deserve to go to custody, but those people would not have read the psychiatric report. I think there is a real basis that you can be rehabilitated.’

Simpson was also banned from contacting Mr Smith under the terms of an indefinite restraining order.