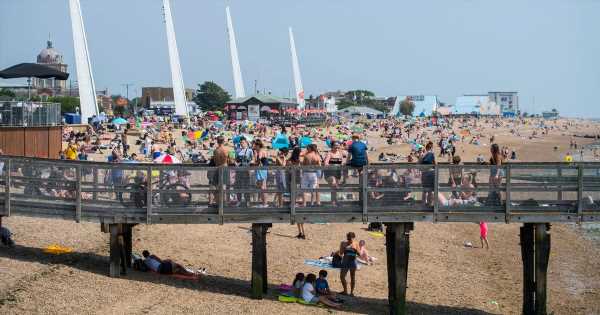 Britain has been treated to some stonking weather over the last week or two with parks and beaches packed full with sun-worshippers.

Throughout the country temperatures have absolutely sizzled, with the mercury shooting past 30C for many Brits.

Unfortunately for many parts of the UK the excitement of summer will come to a screeching stop with the onset of thunderstorms.

El Scorchio! will be replaced by dark, looming clouds and glorious sunshine rays will make way for raining cats and dogs.

On Thursday however the heatwave will continue, with parts of the UK seeing the heat rise to over 30C.

In fact many parts of the south west, Wales and Northern Ireland will remain under an amber weather warning, meaning extreme heat will impact on people's health.

While the Met Office has indicated the amber warning will end for most areas at midnight on Thursday it remains in place for another day in Northern Ireland.

Come Saturday and Sunday there will be a dramatic switch in Britain's weather fortunes with the Met Office issuing yellow weather warnings.

From Saturday right through to Sunday the Met Office is warning of heavy rain and thundery shower with transport disruption in some places.

The yellow warning is in place for much of the UK with only Scotland, Northern Ireland and the most northerly parts of England/Wales escaping.

But in all other parts of Britain sun cream and flip flops will be replaced with umbrellas and wellies.

In its forecast for the weekend the Met Office said: "Over the weekend fine in northern areas, although some low cloud often near the east coast.

Thursday and Friday however should be predictably hot with temperatures still reaching levels that are more at home on the Mediterranean. The good news though is many parts of the UK will not have to wait long for the next heatwave with another one expected to arrive in August.

Less than two weeks after the mid-July wave led to some of the hottest temperatures ever recorded in parts of the country, extreme temperatures will return between August 4 and 18.