A wild tiger cub took the mighty unusual step of seeking human help after losing her mother in the east of Siberia.

The tigress came close to houses in the village of Gornovodnoye and was spotted laying fearlessly on the road.

She appeared near the window of one house in her quest for assistance over several weeks.

Aged around ten months, locals believe the lonely big cat – still too young to hunt by herself – was pleading for help.

Is is believed that the female cub, from the highly endangered Amur tiger species, probably lost her mother to poachers or an accident.

Residents did not risk their lives feeding her but instead called in experts.

Russian tiger specialists who arrived at the village initially left her in the wild but closely monitored the cub, hoping her mother would return. 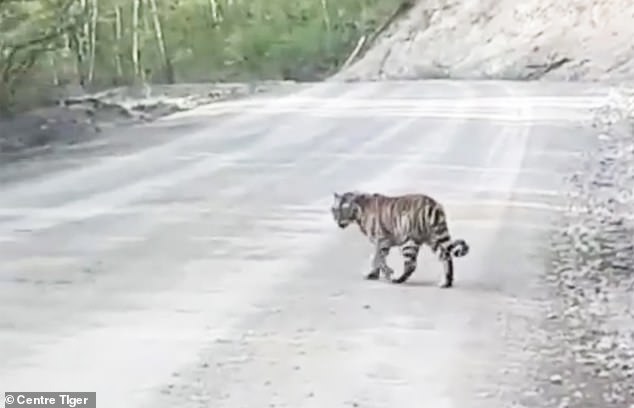 The solitary tiger was caught on camera wandering the streets by itself. Residents believe she was pleading fro help 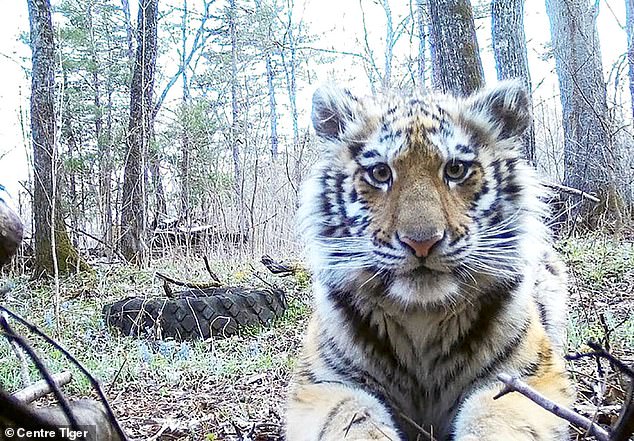 The cub was suffering from exhaustion and nutrition problems, according to a tiger rehabilitation centre

After two weeks it became clear that was not going to happen so experts made the decision to sedate the tiger and take her to a specialist rehabilitation centre.

While tigers usually stay far away from humans this cub came to the village, often within view and seemingly asking for help, and did little to resist capture.

‘In my experience, this is the first time a tiger cub behaved so calmly during immobilisation and transportation,’ said Valery Yashmetov, a hunting surveillance inspector involved in the rescue.

‘Perhaps this is due to age and individual characteristics, and possibly health problems.’

‘After catching the tiger cub, it became clear that the animal was moderately exhausted and experiencing nutritional problems,’ said Viktor Kuzmenko, director of the Tiger Centre in Primorsky region, which rehabilitates big cats.

‘In the coming weeks, all efforts will be made to restore her health and normal weight.

‘In future, I hope that the tiger cub will return safely to its natural habitat.’ 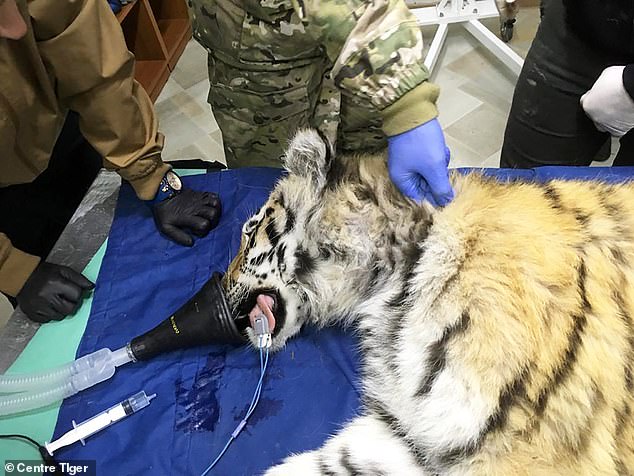 The cub was sedated by staff before it was taken to a rescue centre. Tiger experts said it was the ‘first time’ a cub had behaved so calmly during immobilisation and transport

Another theory is that the tiger could have been raised by humans but then released or escaped into the wild.

‘It’s rare to see orphaned tiger cubs in May as normally mothers do not give up on cubs of this age,’ said Sergey Aramilev, director of the separate Amur Tiger Centre.

‘Quite likely the tigress was killed by a poacher or died from natural causes.’

But they are also investigating the possibility that the tiger was raised illegally by humans and then ‘escaped or was thrown out’. 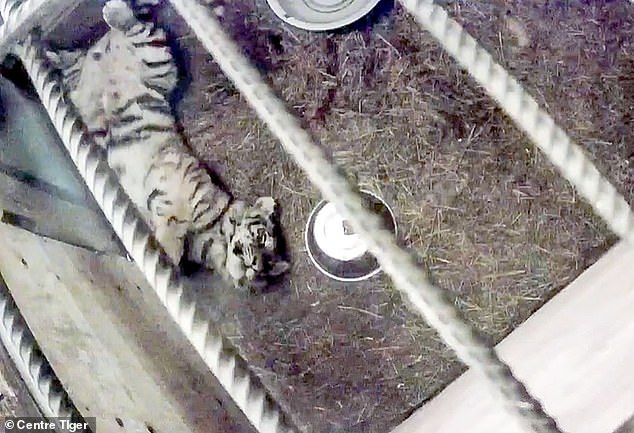 Russian tiger specialists who arrived at the village initially left her in the wild but closely monitored the cub, hoping her mother would return. They eventually took her to a rehabilitation centre and hope to eventually release her back to her natural habitat

‘There are certain oddities in her behaviour,’ he said. For example, she refuses to drink water though does drink meat broth.

‘We hope that the tiger cub will return to normal, confirm her hunting skills and the right attitude to (be cautious of) people, eventually allowing her return to the wild.’

The Amur tiger is the largest big cat in the world. The species was hunted to near extinction by poachers and while numbers are recovering, there are still fewer than 700 in the wild.