Going out with a bang! Tilbury power station building crashes down as spectacular explosion marks the final demolition at the Thames-side site

This is the moment the last buildings at Tilbury power station were brought down in a cloud of smoke at the Essex site.

Footage, filmed today, shows bright explosive flashes as the two boiler houses were razed with a loud bang in the fourteenth and final explosive demolition there.

The controlled explosion could be heard in parts of Tilbury, and neighbouring Kent. 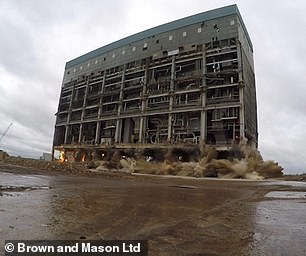 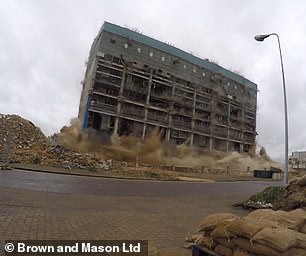 This is the moment that the fourteenth and final demolition at Tilbury power station brought down boiler houses 7 and 8 at the site on the bank of the Thames in Essex. The structures came down in a thick cloud of dust and debris, which cleared to leave a pile of rubble

Before the moment of detonation, seagulls could be seen flying around, and they flew up and away in fright when the explosion came.

After the dust cloud had blown away, a pile of metal and rubble was all that was left of boiler houses seven and eight of the station. 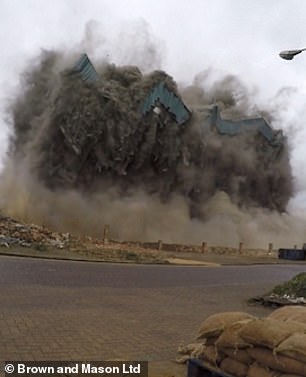 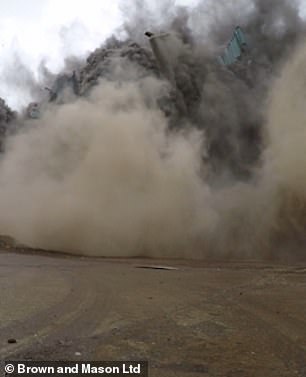 The dust took less than two minutes to settle, leaving a mound of metal and concrete in its place. Work on the demolition of the station began in January 2016, and this was the last explosion

This morning’s demolition was the last in a long line of detonations since the site was closed in August 2013, bringing the loss of 220 jobs.

The first of 14 demolitions began in January 2016, bringing down a coal junction tower and its connected conveyor.

At the peak of the operation, there were more than 100 workers on the site, dedicating 570,000 hours to the project. 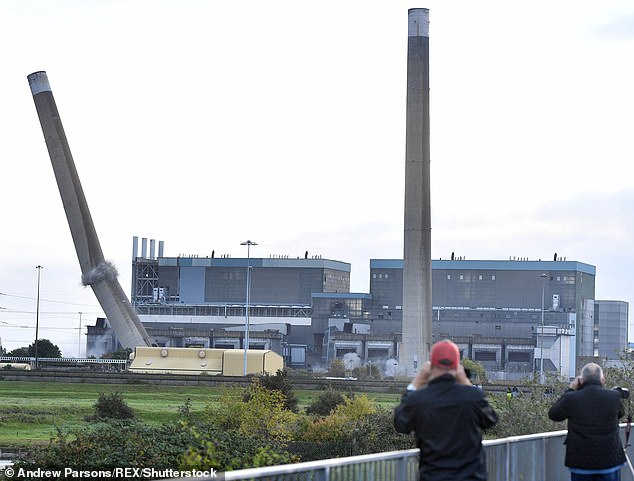 In June 2017, three structures known as precipitators, which remove fine particles like dust and smoke, were also destroyed.

The most significant other demolition came in September 2017 when two 170ft high chimneys which had dominated the skyline for 50 years were brought down.

Other structures, such as the coal bunker houses, were demolished in 2018.

The power station was originally operational until 2011, when energy company RWE was granted permission to convert the plant into a biomass station. 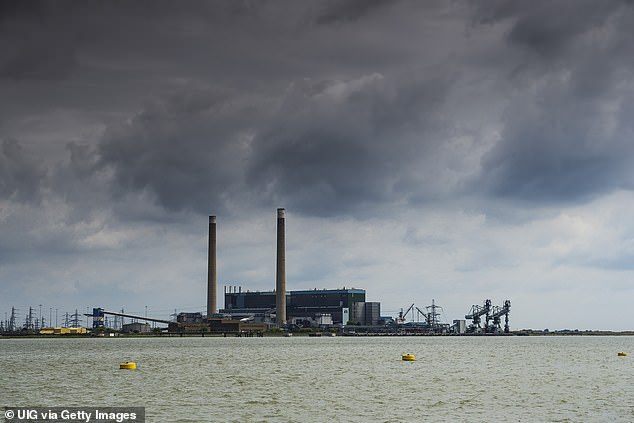 The power station was originally operational until 2011, when owner energy company RWE was granted permission to convert the plant to a biomass station. It suffered a major fire after its reopening in 2012 and was finally closed for good in August 2013

It re-opened in 2012 but suffered a major fire months later.

More than 120 firefighters battled the blaze after between 4,000 and 6,000 tonnes of fuel went up in smoke.

A year later it was reported that the station was to close and it generated its final unit of electricity on August 13, 2013.

In 2016 RWE sold part of the site for redevelopment and hired contractor Brown and Mason to begin demolishing the power station buildings on the land it still owned.

The company said in August last year it had taken ‘initial planning steps’ towards turning the old site into a gas-fired power station and a battery storage facility.

The plan would require the construction of a three-kilometre gas pipeline to connect the plant to the transmission network.

However, the proposals were shelved in November last year because of costs.

Tilbury, its official name Tilbury B, was opened in 1967 and was powered with both coal and biomass.